“Welcome to Mykonos!” announced the enthusiastic night manager as he opened the door to our room, revealing a huge (there were stairs!) and peculiar space. I have yet to visit this Greek island but if it is anything like what Villa Simonne is portraying I’m on the next plane. Porcelain statues, massive murals, and ecliptic furnishings that were seemingly inspired by Steve Guttenberg’s personal collection greeted us as we entered. “Where are we?” I said once the night manager left. 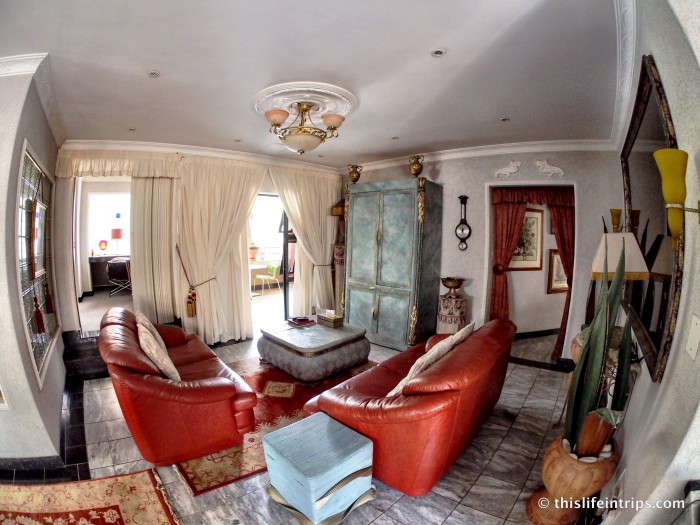 This is Villa Simonne, a reformed luxury resort in Johannesburg’s Killarney Houghton neighbourhood…and it is honestly one of the most interesting hotels I’ve ever had the chance to stay at. Behind the kitschy décor lies a heart-warming story of family, undying love, and a battle between nostalgic romance and the stark realities of bringing  Villa Simonne into modern day.

Villa Simonne. Where to start? The over-the-top and ornate theme rooms? The jazz club chalk full of nostalgia? The family pets – namely giant tortoises roaming the elaborate grounds? How about the man that dreamt it all up? His name is Nestor Kelaiditis, and he is the most interesting man I have never met. 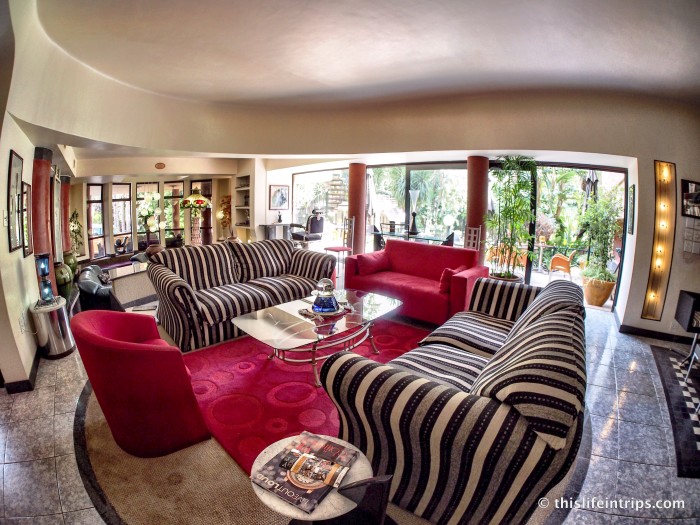 ”There he goes now” said Dimitri, Nestor’s son who was pointing towards his father. Head down and walking in a hurried pace, Nestor grumbled something as he passed. This man gave off an impression of someone that was incredibly busy even though there were only a few guests at the hotel. I would later find out that this odd demeanour is just his nature. “He is eccentric” said Dimitri. “Very eccentric.”

I suppose you would have to be to build a place like Villa Simonne; 15 travel themed rooms ranging from the Olympic penthouse to the Moulin Rouge suite, a jazz club that is as much of a “museum of the absurd” as it is a bar, and a massive outdoor space that includes Roman statues, imported fountains, and free-roaming tortoises – 5 to be exact. Oh, and a gold Rolls Royce parked out front.

Dimitri went on to explain that while building the Emperor Nero Suite his father dressed up as Emperor Nero – staying in character for about a week. During construction of the Bacchus garden bar, he dressed as Bacchus, the Roman God of intoxication. I think this is where I decided I really liked this Nestor Kelaiditis fellow, and this was before I found out he is much more than Roman costumes and a giant turtle aficionado.

Once you get past the gruff exterior and odd behavioural traits, you will find a hard-working and passionate man. Originally from Greece, Nestor immigrated to South Africa for a better life. He started with next to nothing and managed to find success in the restaurant industry. You know, that old chestnut. This success led to the massive complex that is now Villa Simonne. For 37 years the hotel was his family home, with 30 of those years spent building and expanding. Of course Nestor had no intention of turning his home into a resort. On top of being a place to raise his children it was to be his families sanctuary and retreat. Being a musical family, the piano lounge was used to share performances with friends, the cellar was stocked with wine for his family to enjoy, and the pool was for his children to cool off in…or the turtles. I’m not sure on that one. 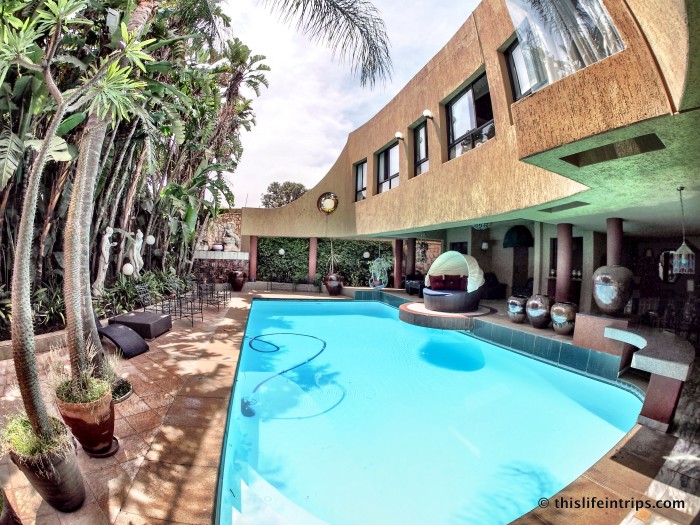 Things, as they do in life, changed. Nestor’s children grew up and moved out. Dimitri became a clinical psychologist and headed for the UK. Nestor got out of the restaurant world and was suddenly left with a very large, very empty home.

Then there was the passing of his wife, Simonne. 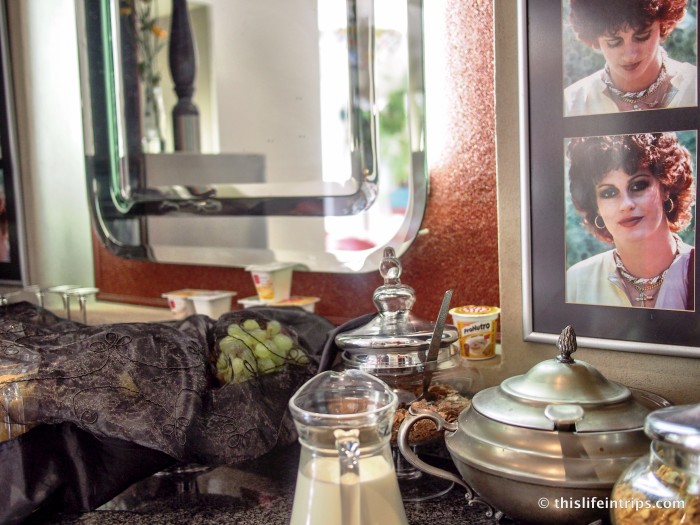 ”This place is his homage to her” explained Dimitri. Suddenly the random pictures of a woman with big 80’s hair and an even bigger smile started to make sense. Yes, much like the Taj Mahal, Nestor has built this palace, as odd as it may seem, in Simonne’s honour.

Maybe he isn’t so quirky after all. Just a man who loved his wife. 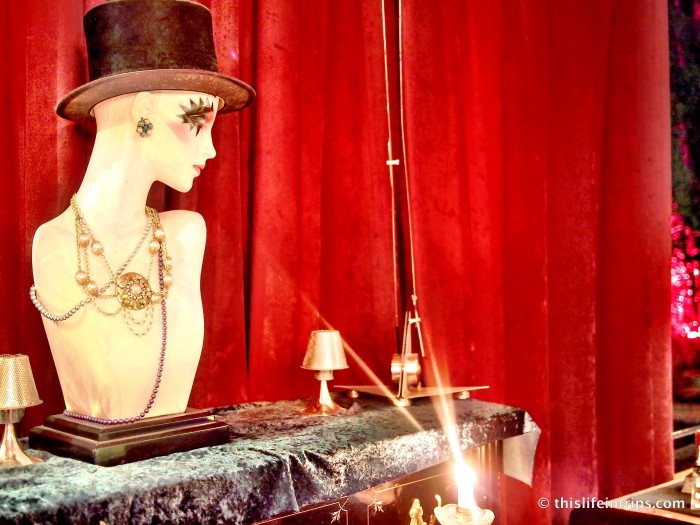 But why the tacky furnishings? Elaborate fountains? Marble/porcelain everything? Dimitri explains it this way: “Over-the-top is the signature of the Greek diaspora in South Africa.  That’s what was en vogue when they left Greece back in the 1920’s.” Still, even with the out-of-date decor there is undeniable charm to the time capsule that is Villa Simone.

Our rooms, for instance, did have that cozy allure of some distant place. When asked how it was possible to furnish so many different themed rooms with odd collectables Dimitri revealed that his father has travelled all his life and collected as he went. Most items reflect Nestor’s hobbies of photography, music, and motorbikes. This didn’t explain the massive paintings in our suite but I can only imagine that they caught his eye at some point or another and, having ample space, he said “I have the just the spot for that!” 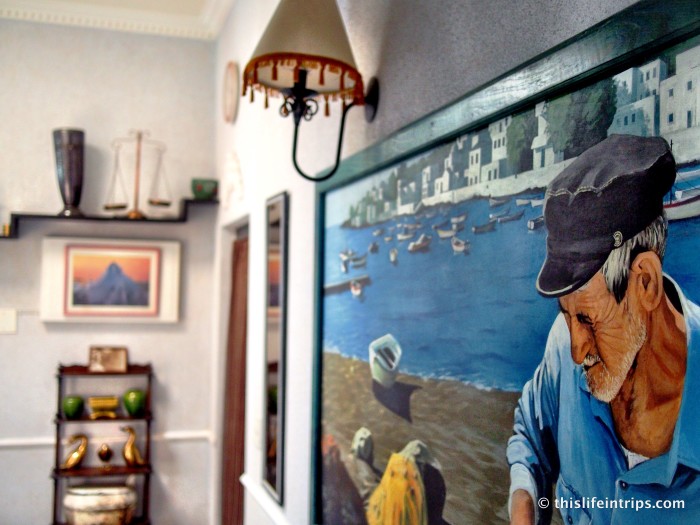 After enjoying a night in Mykonos the eager-to-please manager insisted we move to the Florence Luxury Apartment where there was more than enough room for one to unwind. This is just another example of something different Villa Simonne offers its guests – space. The apartments and suites really are spacious. With flat screen TVs, kitchenettes, en-suite bathrooms, and outdoor terraces so guests can enjoy the warm afternoon Joburg sun, Villa Simonne does a good job making you feel at home in South Africa…or Italy…or Greece. 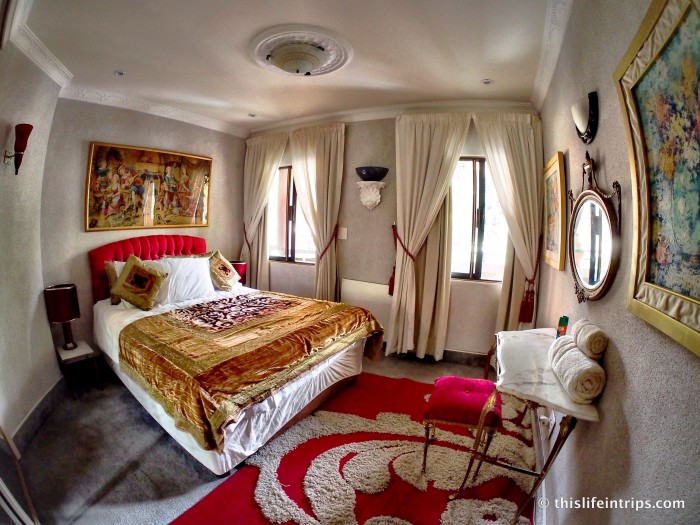 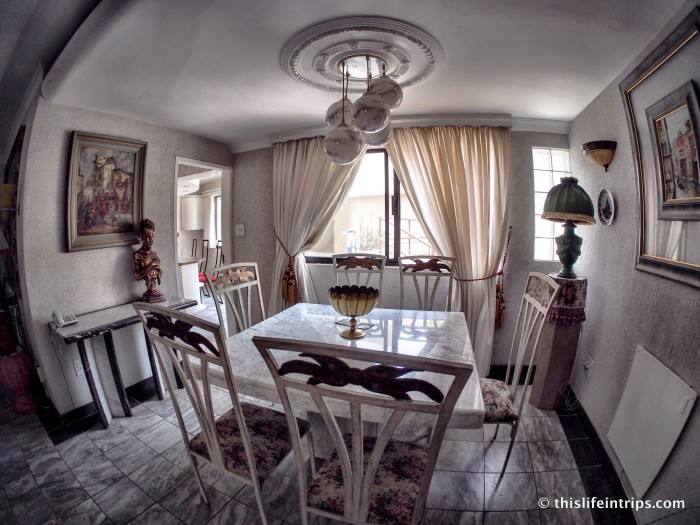 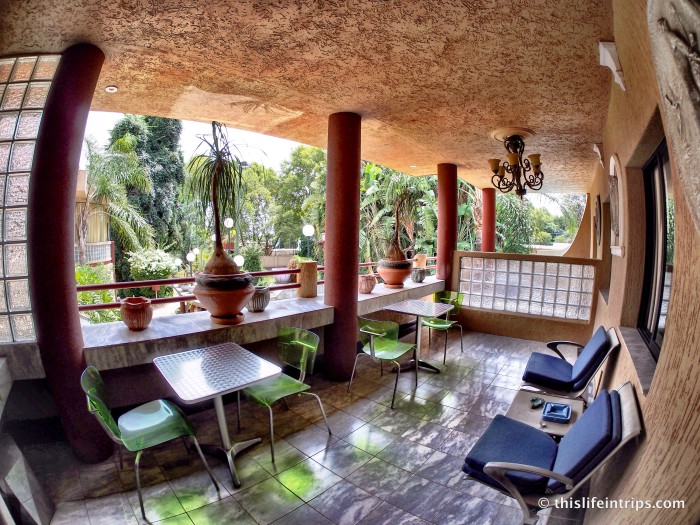 Asked if the décor and style will ever change Dimitri shrugged his shoulders “My father often comes up with new ideas for the place, like the Bacchus Garden Bar that went up last year.” Maybe this old-world kitschy style isn’t a bad thing – especially in a world teeming with cookie cutter hotel options.

One Hell of a Bar

Just as I started warming up to the charm and character of Villa Simonne, Dimitri drops a bomb by showing me the 1920s Piano Lounge and the Wild West Snooker Room. These spaces are incredible and would easily become a hipster haven if located in New York, Vancouver, or even Cape Town. Johannesburg may not be far off from discovering how great this place is with themed events such as masquerades, murder mysteries, and Casino Royale nights becoming common occurrences.

Of course they are. Just look at this place. 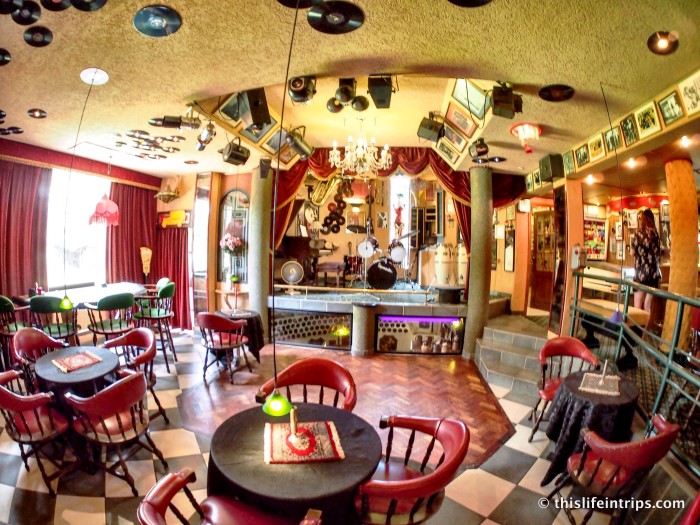 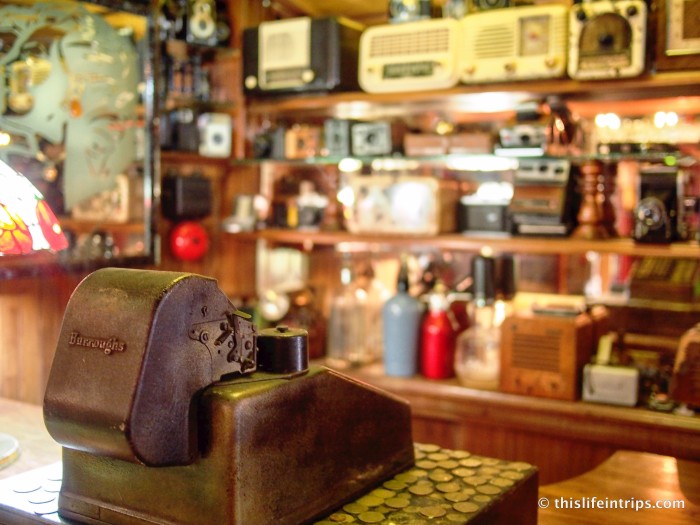 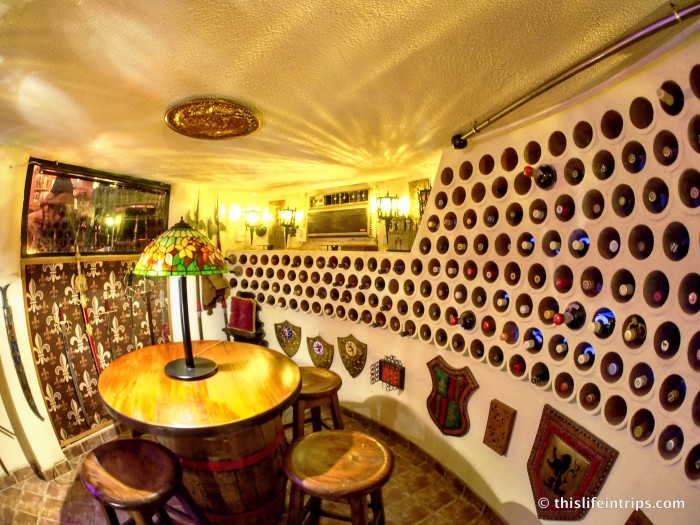 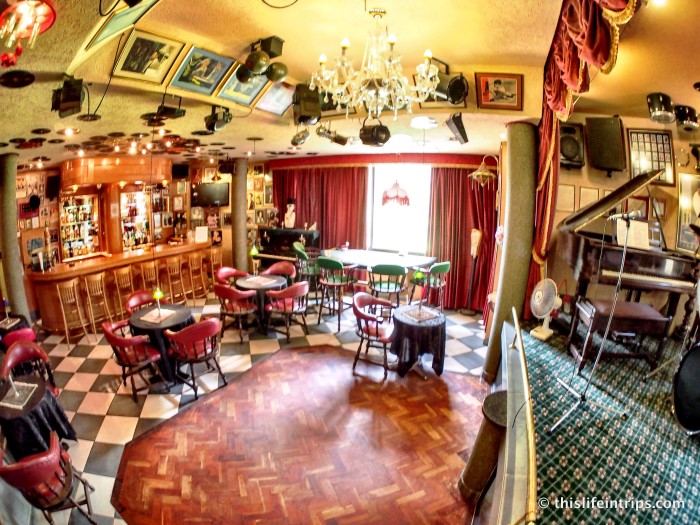 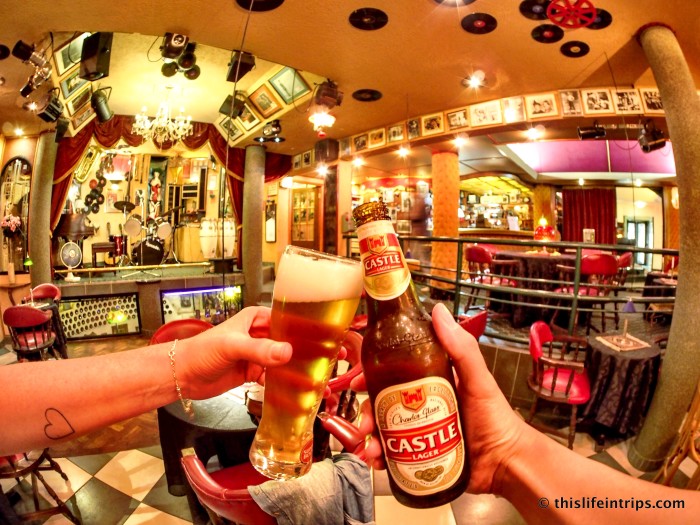 Villa Simonne is set up to do Big Things

Villa Simonne is ready to handle mid-sized to large events in a way only Villa Simonne can. Although quirky, the garden area and the Roman-inspired amphitheater really are beautiful and there are more memorable wedding photo-ops to be had at Villa Simonne than there are records in the pub. If that’s not enough, there is the piano lounge for one memorable reception. I would love to attend that party. 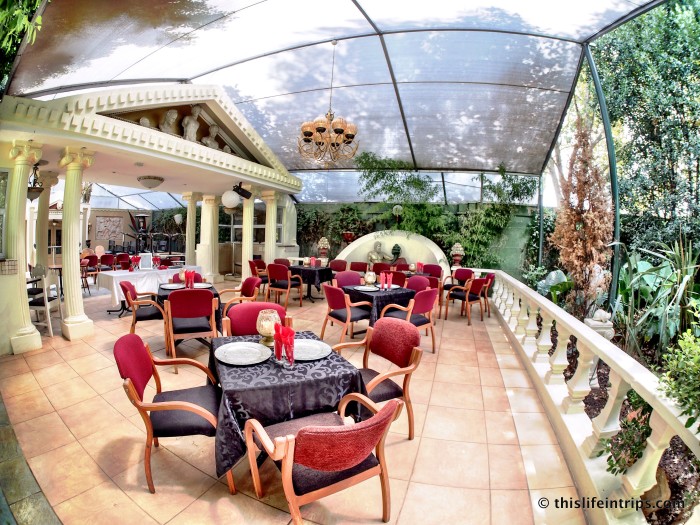 What about doing business at Villa Simonne? I can’t think of a better way to make work fun. The Teflon Garden conference area can seat up to 55 people and the Library boardroom offers space for 25. Both offer plenty of breakaway areas for you to goof off in. Even the piano lounge can be transitioned to hold your next conferencing or meeting. Seriously, this room could make a sleep apnea convention thrilling.

Over drinks in the ridiculously rad lounge I questioned Dimitri on the term “Guest Lodge” which was used to describe Villa Simonne. He went on to describe the raging debate between his father and himself that lasted for months, about what term best represents the Villa. They finally settled on “boutique hotel,” a fitting category as this place is like no other.  Along with adding in the hotel category Dimitri has injected his own personal touch and humor into things like the guest books found in the rooms and, since my stay, the website. At first it was odd seeing the humor in the property especially with how the hotel was originally portrayed online but after “some groveling and many whisky fuelled discussions” Nestor has accepted what Villa Simonne really is – a unique and wonderful boutique hotel with loads of character. A place where “nothing matches and nothing is what it seems.”

Hats off to Villa Simonne for staying unique and finding herself. As Dimitri points out on the company website, Villa Simonne is a place “like you could never have read about in a travel guide.”

I say you will. A gem like Villa Simonne won’t stay undiscovered forever.

Although I was provided a complimentary and unique accommodations at Villa Simonne,
the experience, opinions, and quirky stay are my own.