When I told people I was going to Vegas for less than a day I got the same response:

“Pfffffffffffftttttttt! What can you do with only 24 hours in Vegas?”

Well, a lot my negative friend, a lot. Read on nay sayers: 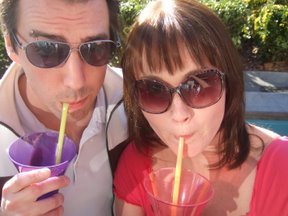 The day started out like any other retired Canadians day in Florida, up by 5:30 AM and on the road fighting with your GPS system. Poor Tom. In all fairness, when it comes to construction, Tom doesn’t know a road from a parking lot. It was great of Erin’s folks to drive us around and share their retired life with us. Again, its a good life. We said our good bye’s and were on to Leg #2.

The reason for our short layover in Vegas was because we could not find any reasonable direct flights to San Fran. It was actually cheaper to stop in Vegas…plus its Vegas and it was Erin’s birthday. So what to do with 24 hours in Vegas? 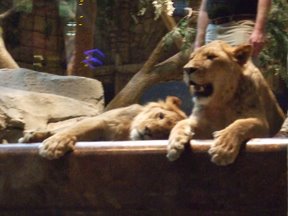 Now I have written about Priceline before but this time they had really out done themselves. We booked Planet Hollywood smack dab in the middle of the strip for $45! That’s nutz. While checking in we were offered to upgrade our room for $60 which we happily accepted. Turned out to be well worth it as we got a room with an amazing view of he Bellagio fountains.

On top of that the room was ridiculous, huge bathroom, plasma TV, $12 peanuts etc… We were both a bit tired and would have loved to stayed and enjoyed the room but we had limited time and a birthday to celebrate. Besides, there is no sleeping in Vegas.

A bit peckish we decided to first hit a buffet. Bad idea as “peckish” and “buffet” are words that do not mix. Bad idea #2 was washing the huge meal down with large margaritas. Armed with yardstick drinks and protruding bellies, we wobbled our way down to the MGM grand to look at the kitties. So cute. 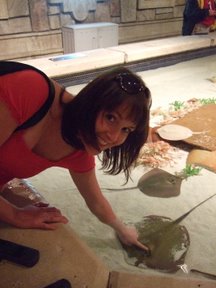 We then made our way over to Mandalian Bay to see their aquarium. By this time the 3 liters or so of creamsicle booze was fighting for space in my stomach with the 2 pounds of smoked salmon and 3 slices of roast beef I had eaten earlier. Throw a tram car ride in there and you have got a recipe for disaster. We took the short ride between the Luxor hotel and Mandalian Bay. The whole ride I was terrorized by the thought of throwing up in the small car and almost certainly covering the open toed sandal wearing passengers inside. Thankfully it was a short ride so there were no victims.

The aquarium was nice but the one in Boston has it beat hands down. The fact I was hunched over in agony for half the walk through the aquarium probably took away from it as well.

After the painful stroll my stomach started to settle. This was a good thing as we had to head back to the hotel to get ready for a show. For Erin’s birthday I got her tickets to see Phantom. The real gift was me sitting through it and not complaining or falling asleep. Decked out, me in a suit, Erin in a dress, we headed out. The show was good but not something I would normally pay to see. The singing was crazy and the set was really cool. Erin really enjoyed it so happy birthday to her.

After the show all that was left to do was get drunk and gamble. We headed to our favorite cheap spot and settled in at a blackjack table. 2 hours in Erin was up a lot. 3 hours in Erin was even and I was up $300. We decided to call it a night and headed back to our hotel. Before heading up stairs I managed to blow the 3 hours of hard work in less that 3 minutes. Vegas is funny that way, the house always wins. No matter, we still had the fountains to enjoy.

All in all it was a great stop over and saw, ate, and drank a ton with only 24 hours in Vegas.

A short nap and we were off to San Francisco.