Robson Street is finally opening up to its stores this weekend. In a weird/sad way, it means the end of the surprising Vancouver street art that covered its boarded-up its shops. Thankfully, as part of my efforts to capture the very surreal situation we are in, I snapped plenty of pictures of the temporary Vancouver street art as well as some of the city’s normally packed places.

These are Strange Times

While on a mission to find toilet paper (remember when that was a thing??), I was taken back by lineups outside of my local shops. The image of carefully spaced out customers lined up at a bakery struck me in particular. Although I knew the line formed thanks social distancing and limiting customers inside, the image was peculiar. My mind immediately made parallels to Cold War-era Soviet Union and people queueing up to buy bread. That’s when it hit me.

We are living through something truly extraordinary.

On my way home I passed playground equipment taped off like a crime scene which only solidified this thought. Strange days are upon us. With that in mind, I wanted to document this period. I was determined to grab my camera and capture some of the scenery COVID-19 has given us. That said, Covid-19 also gave us an extreme lack of motivation. As such, I proceeded to play guitar and video games for two months straight.

Fast-forward to an unusually warm Vancouver day, I finally gathered the energy to hit some of Vancouver’s busiest spots and capture scenes that (hopefully) will never appear in the city again.

Just over 10 years ago, I crammed in with seemingly the rest of Canada on Robson and Grandville street to celebrate our Olympic triumph. Sidney Crosby just scored the “golden goal,” lifting Canada over the USA to claim the top spot in men’s hockey. The country erupted in celebration. Those in the city congregated to this intersection. Now, I shudder at the thought. 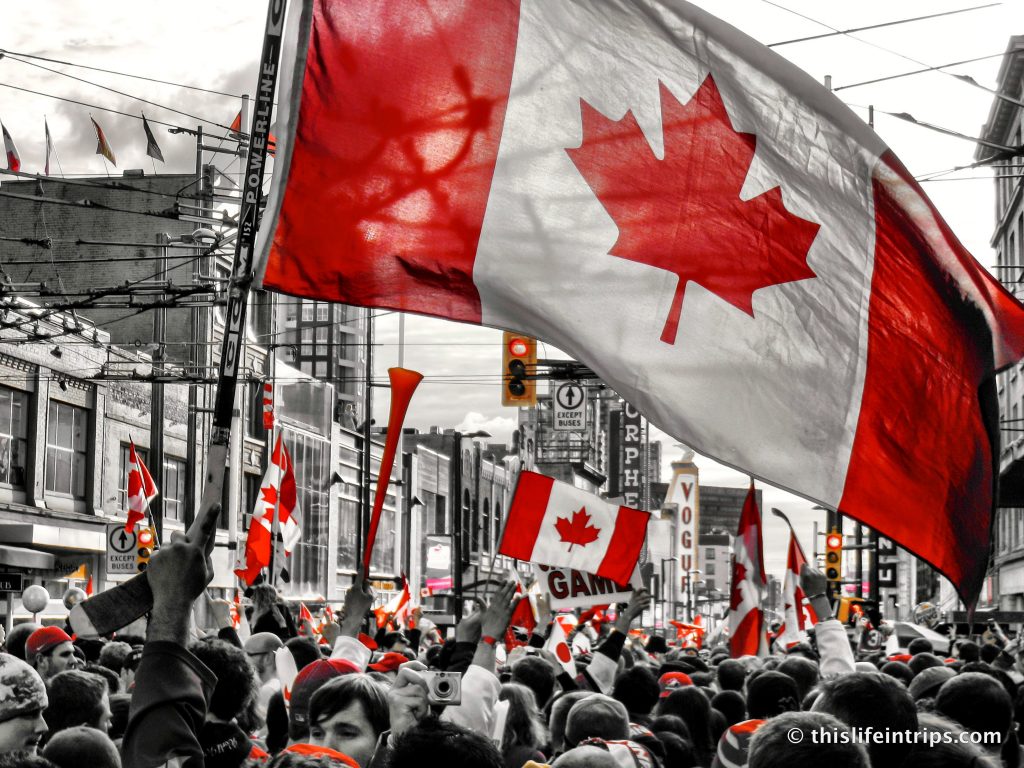 Today, there are crickets. Even more surprising given it was now 530 on a Friday night. Normally the streets are jammed with rush-hour traffic and the after-work dinner and drinks crowd. Today it is me, a couple people on bikes, and a bunch of boarded-up shops with sad handwritten signs in their windows. 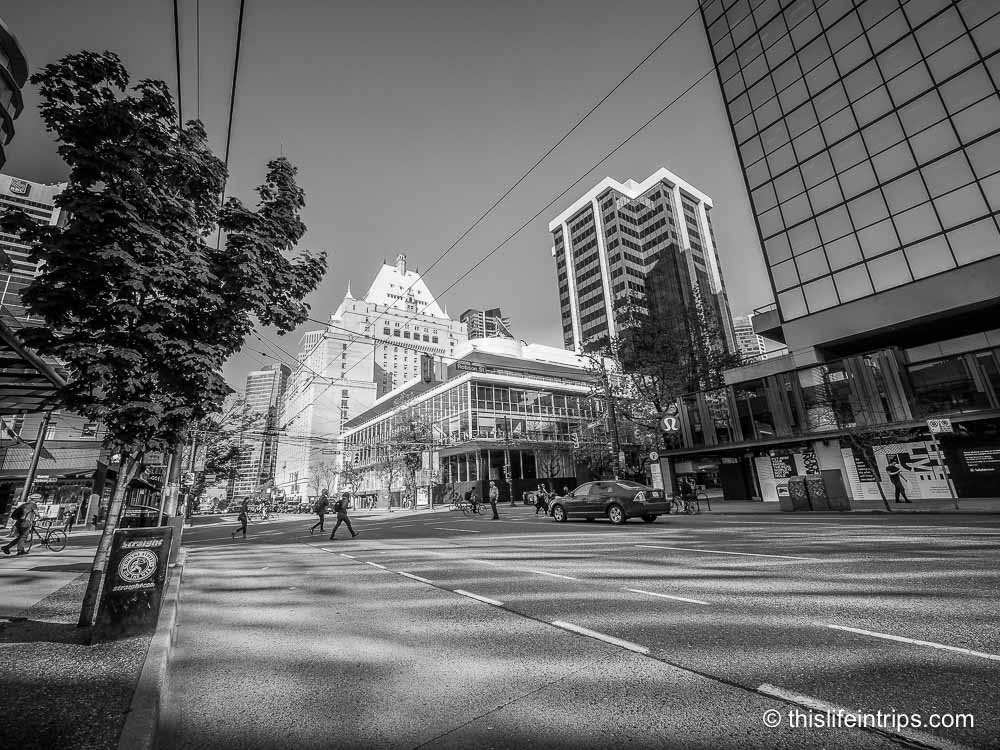 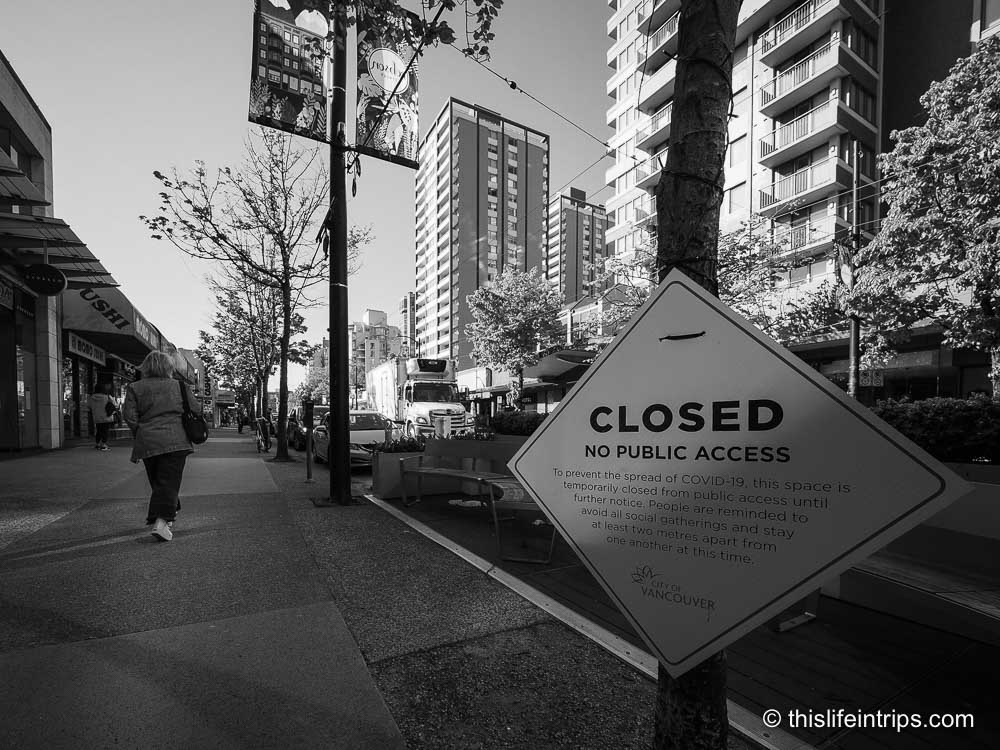 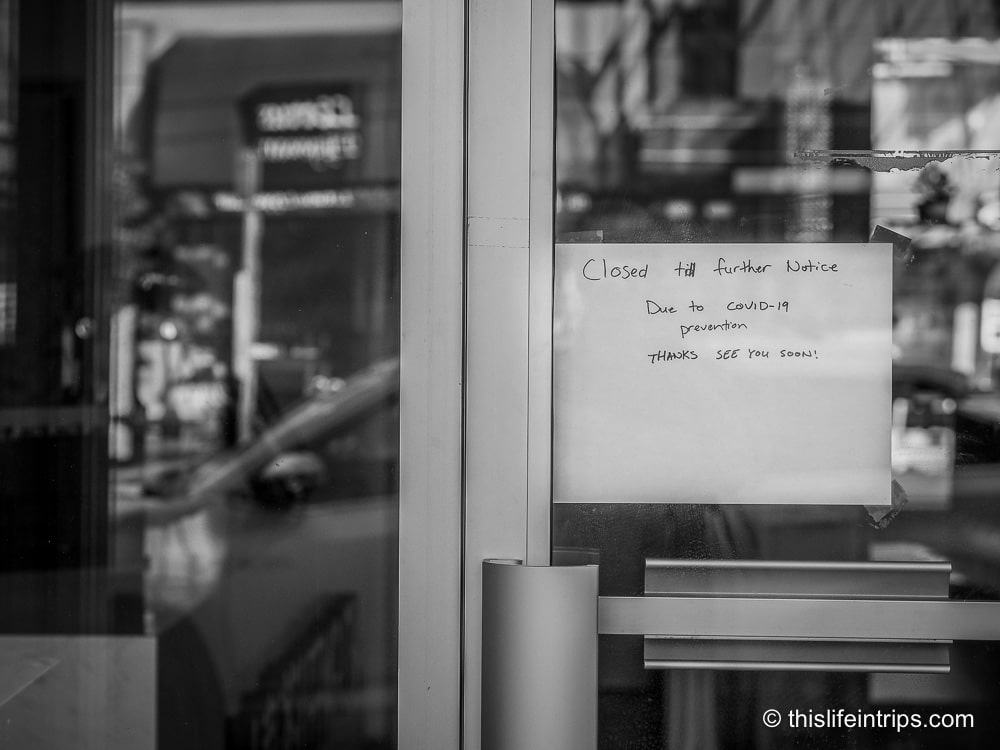 On the positive, to lift us all up from the doom and gloom that boarded-up shops bring, there is colourful Vancouver street art temporarily lining the streets. Despite break-ins skyrocketing, messages of hope (and ironically, to stay home) are scattered throughout downtown. Although it comes with the side effect of people like myself snapping pictures, these murals are a nice touch of colour in an otherwise drab and grey situation. 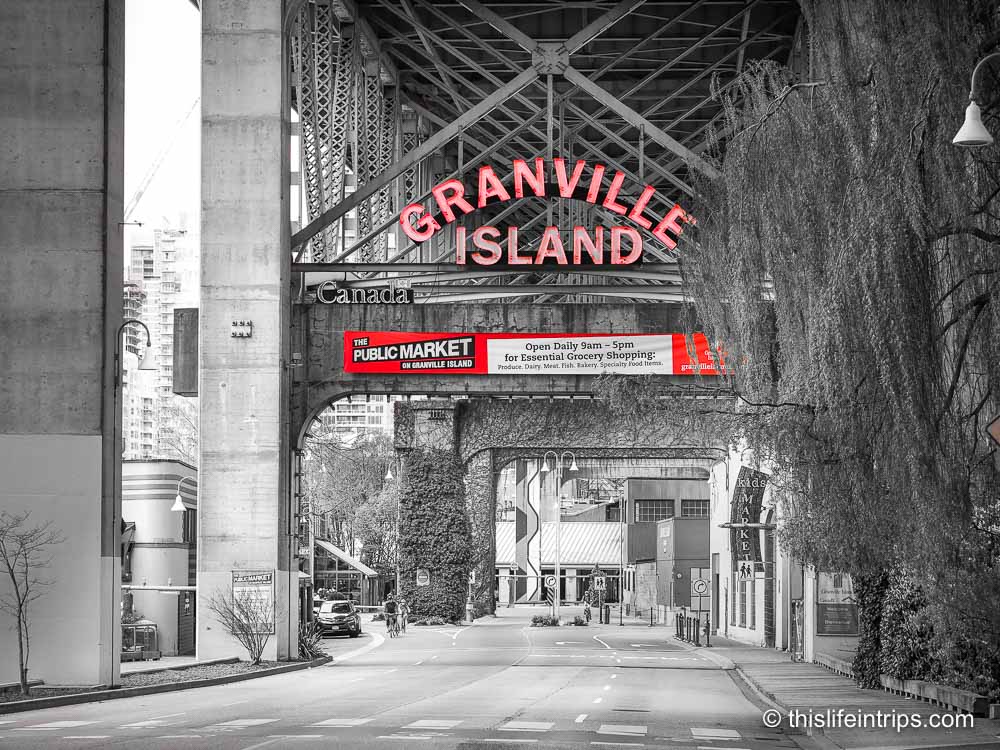 Granville Island played a big part in why I moved to Vancouver. I was drawn in by the amazing produce and fresh ingredients readily available in one beautiful place. Ironically, it was the 10.5 million people per year that has largely kept me away since moving here. This made it especially odd to wander its empty halls and stalls. 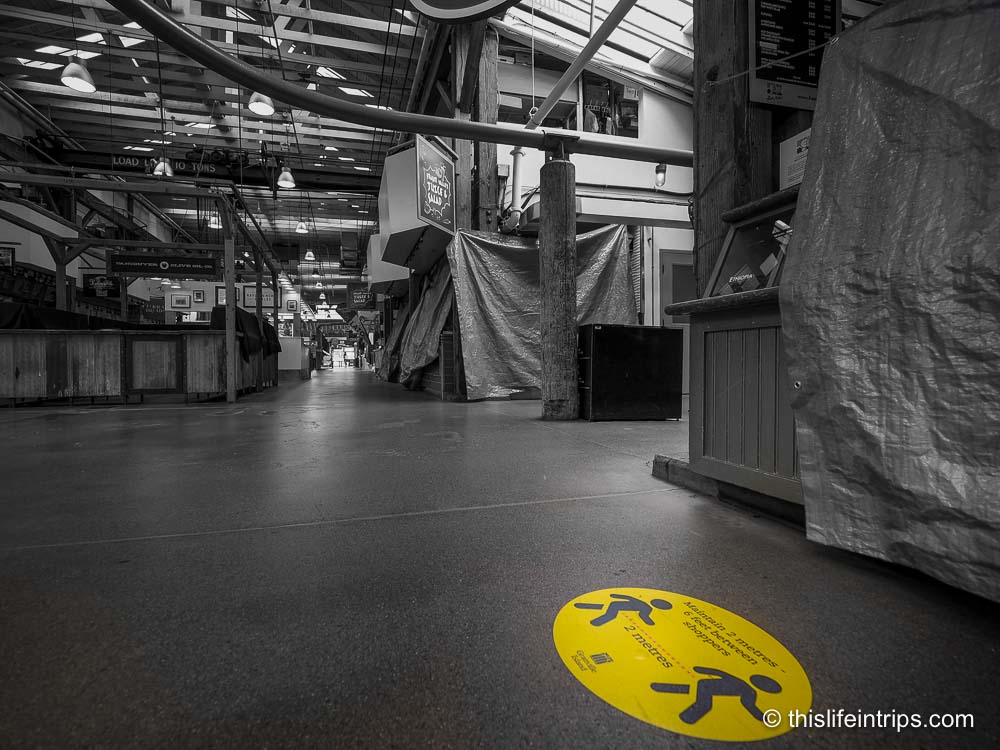 Deemed essential services thanks to the grocery and food stalls, some of Granville Island remains open to the public, although under strict watchful eyes. I didn’t make it too far until the security guard told me to stop taking photos, shop, or leave. 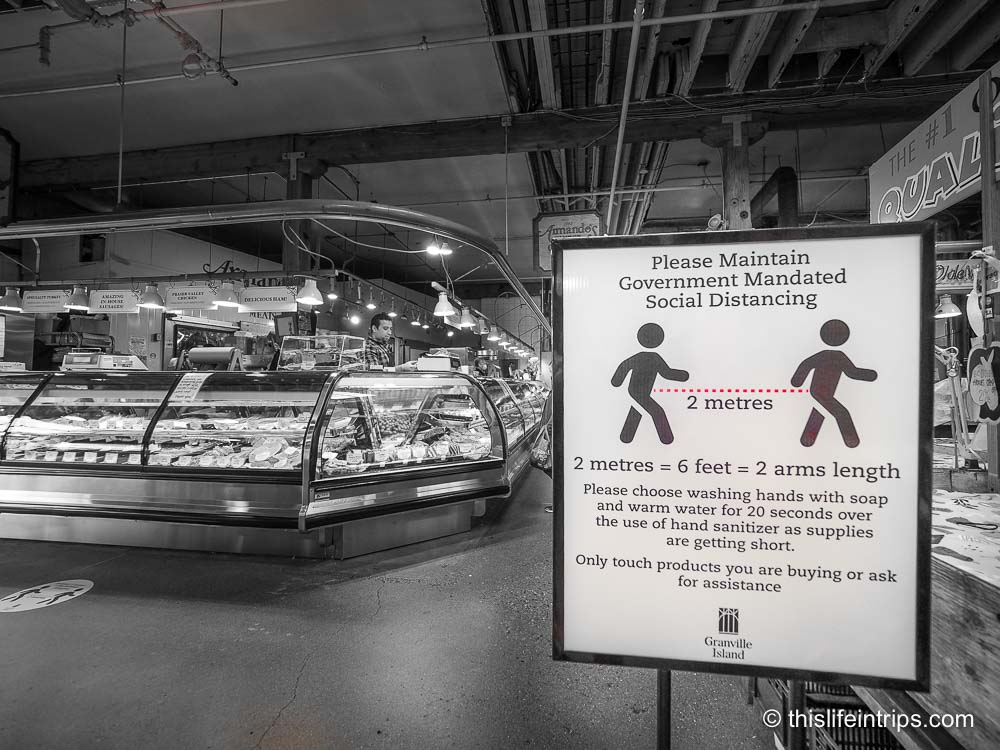 After grabbing some smoked salmon and duck and truffle sausages for my Oyama (this is my pandemic), I grabbed a donut from Lee’s and made my way to the end of the pier. Now, normally this area is packed with tourists taking pictures of the skyline, waiting for the aqua bus, and eating amazing food. Today it was just Erin, myself, and one hungry seagull. 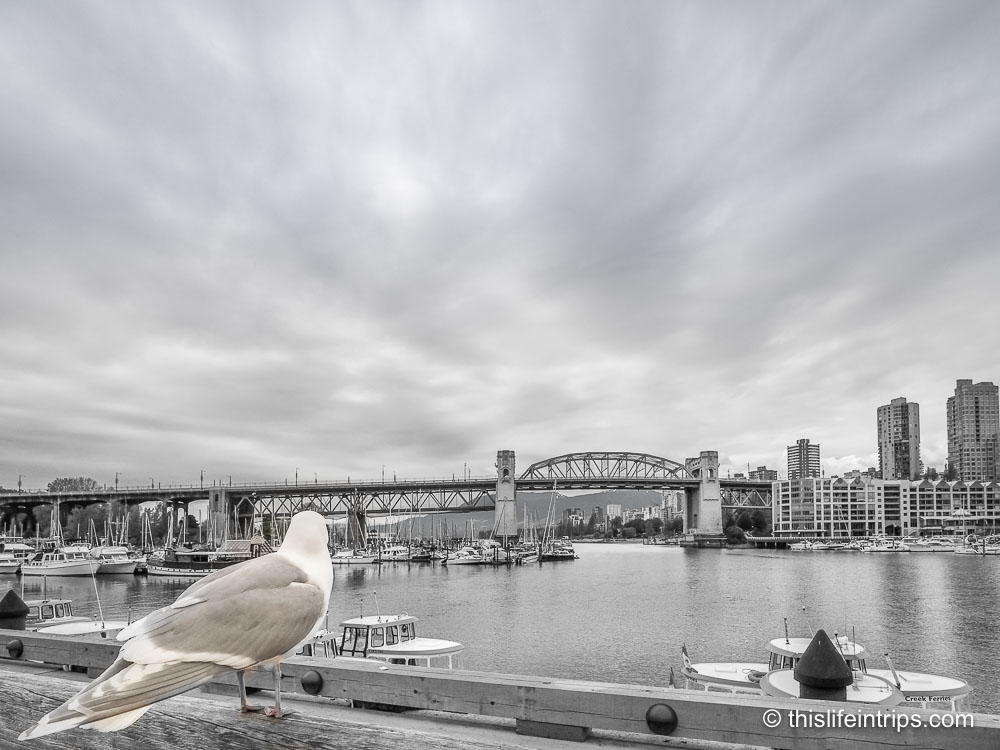 Almost as surreal as the brazenness of the seagull. It literally stood on Erin’s head trying to get a taste of that donut. I get it. People weren’t around to feed the birds so they are getting aggressive. Also, Lee’s Donuts are amazing. Don’t just take my word for it. Celebrity chef David Chang proclaimed it the best jelly donut he’s ever had while filming the Netflix series Breakfast, Lunch & Dinner, with Seth Rogen. Then again, it could have been the drugs they were on. 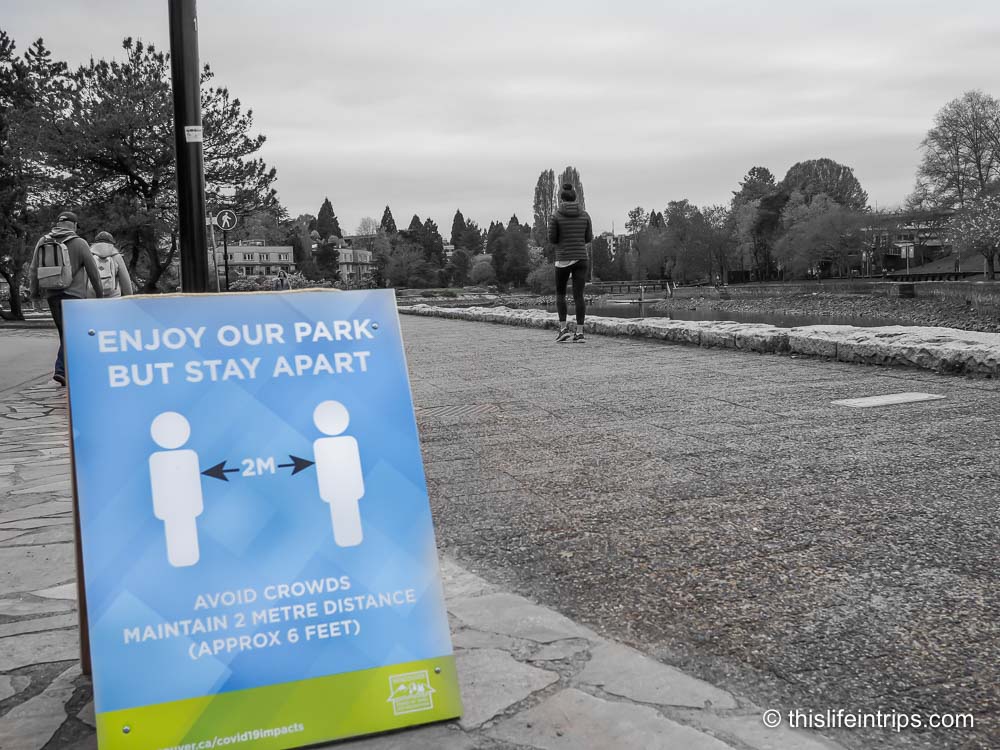 As we made our way back from Granville Island we veered off the seawall. To my surprise, it was very busy. With the nice weather and two months of being cooped up inside, I should’ve known better. Still, with every jogger and cyclist that passed by, I felt like I was being crop dusted with Coronavirus. 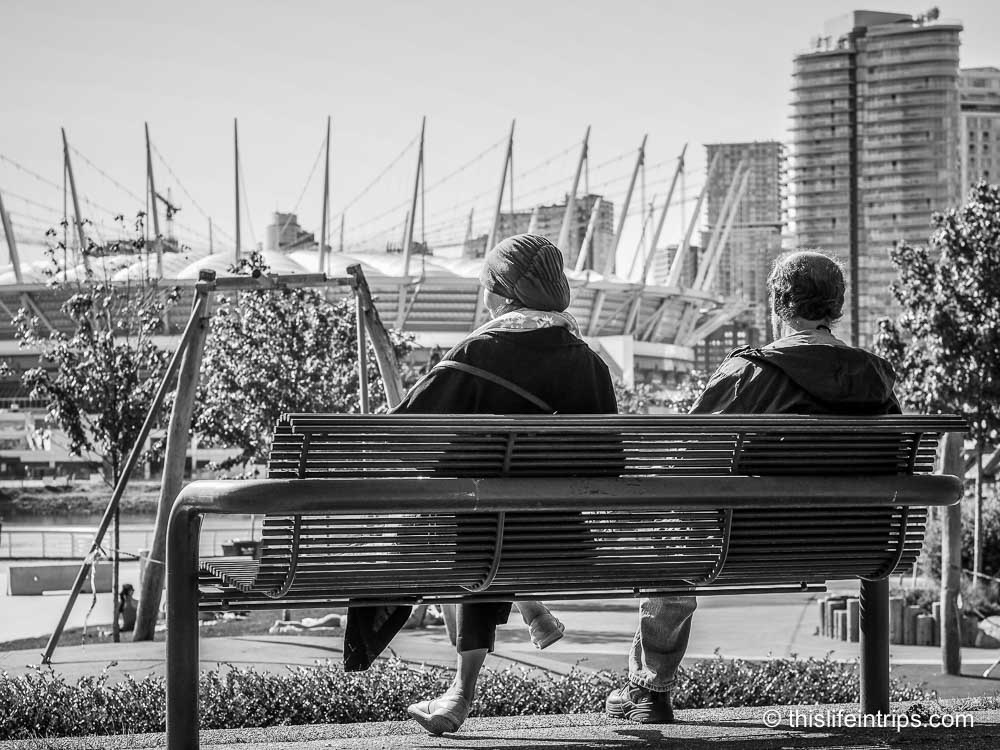 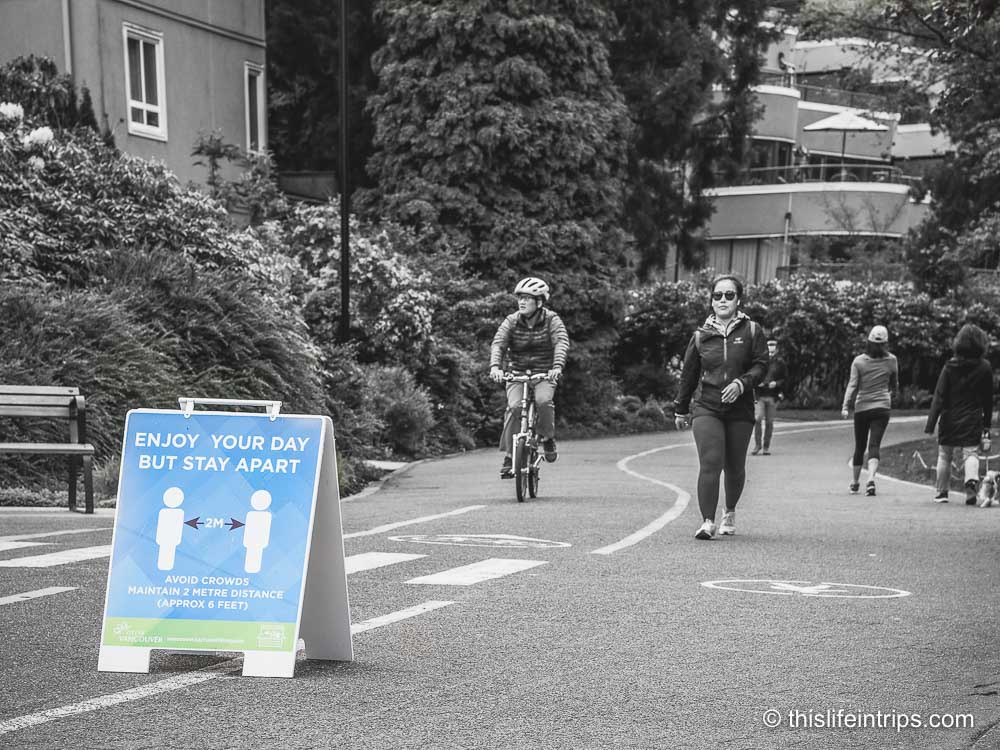 On my bike ride home I stopped at 33 Acres, my favourite local brewery, to stock up on supplies. With the warm weather, I decided to park myself in a nearby park for a cold one. I was not the only one with this thought. 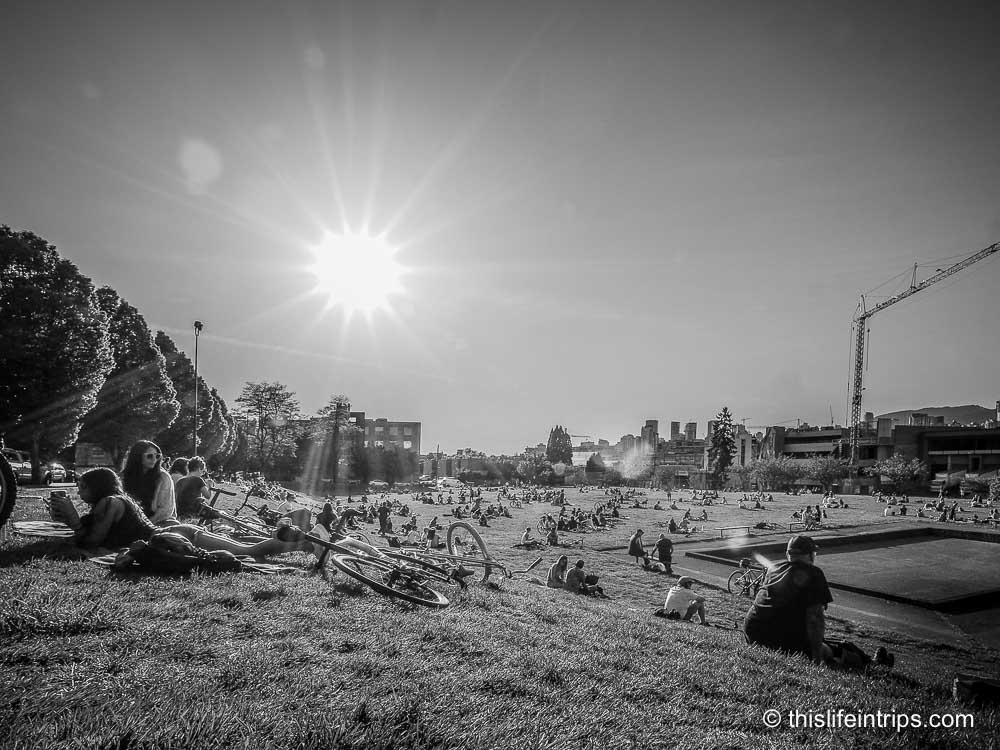 Despite calls to stay in and practise social distancing, thanks to the unseasonably warm weather, Vancouverites seem to be at a breaking point. This made me a touch uncomfortable and brought worries about celebrating too soon. Despite these thoughts and the media coverage of the packed beaches and parks in Vancouver recently received, groups were small and staggered. Was it enough? I think we will know two weeks from now.

Until then, back inside for this guy.

What say you?
Thoughts on this temporary Vancouver street art? What did your city look like?
Let’s hear it! 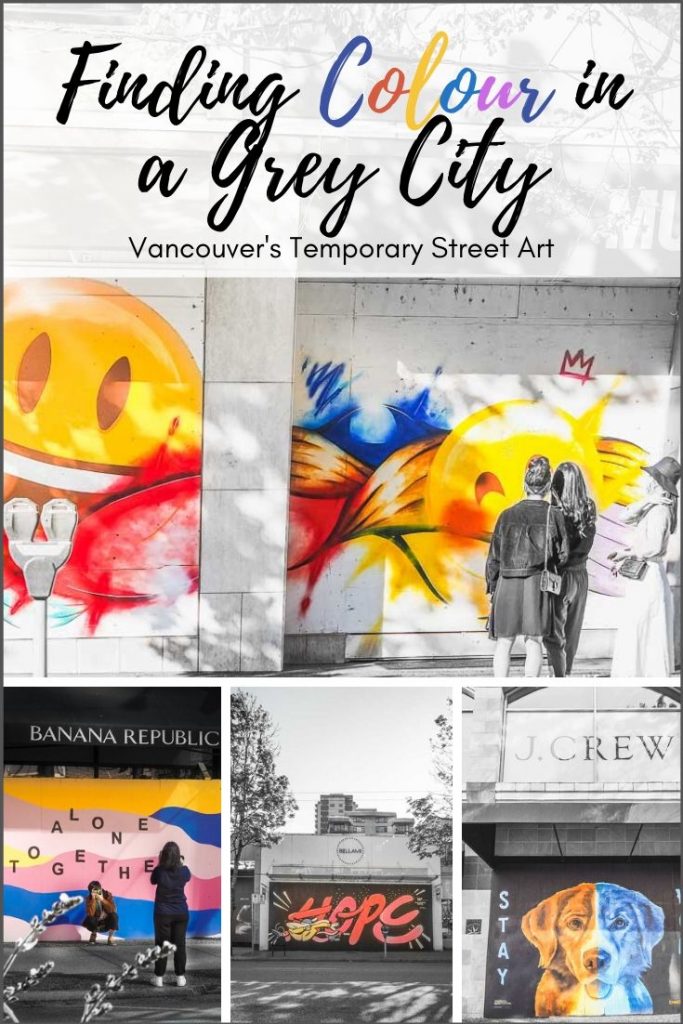 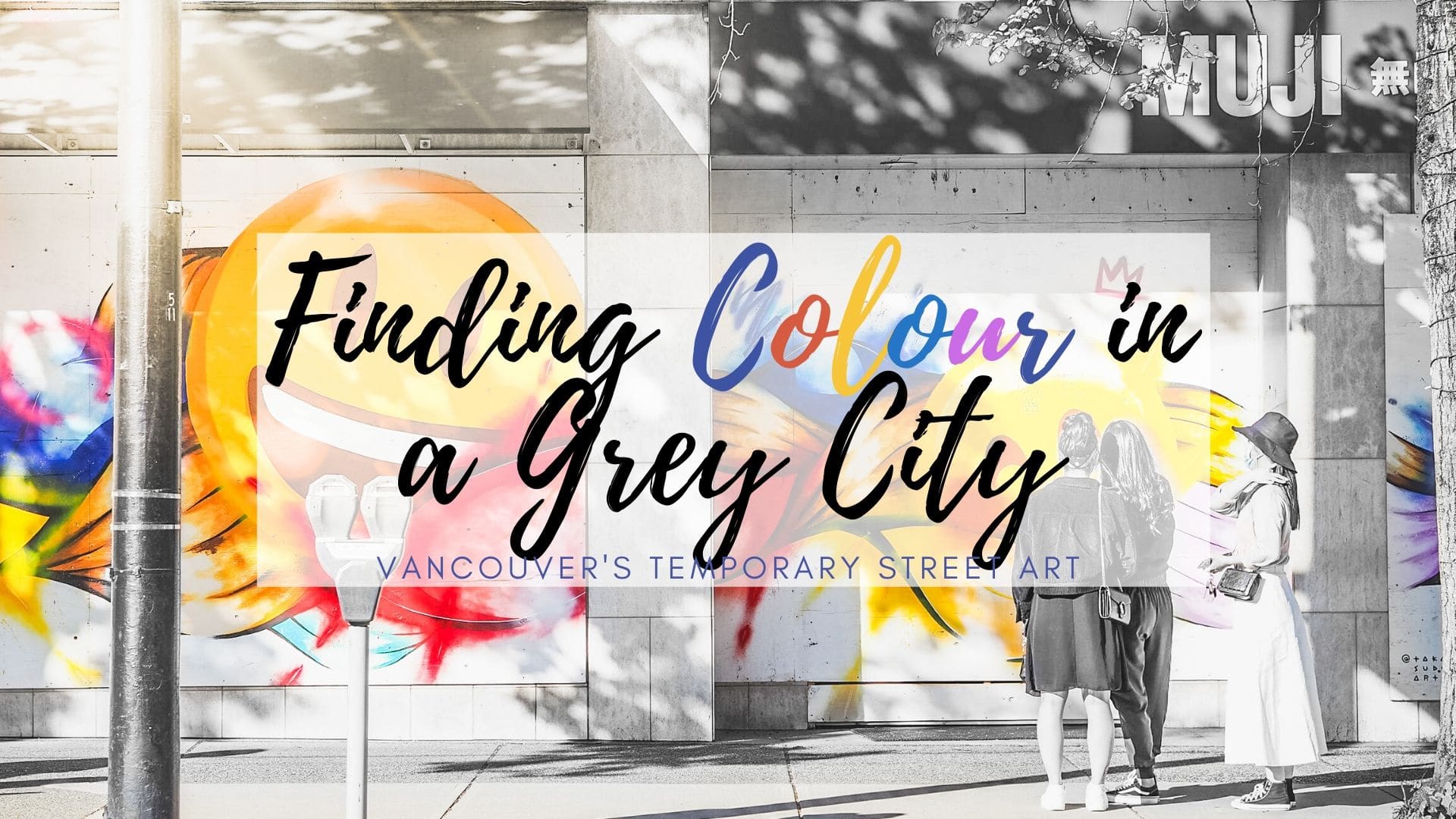 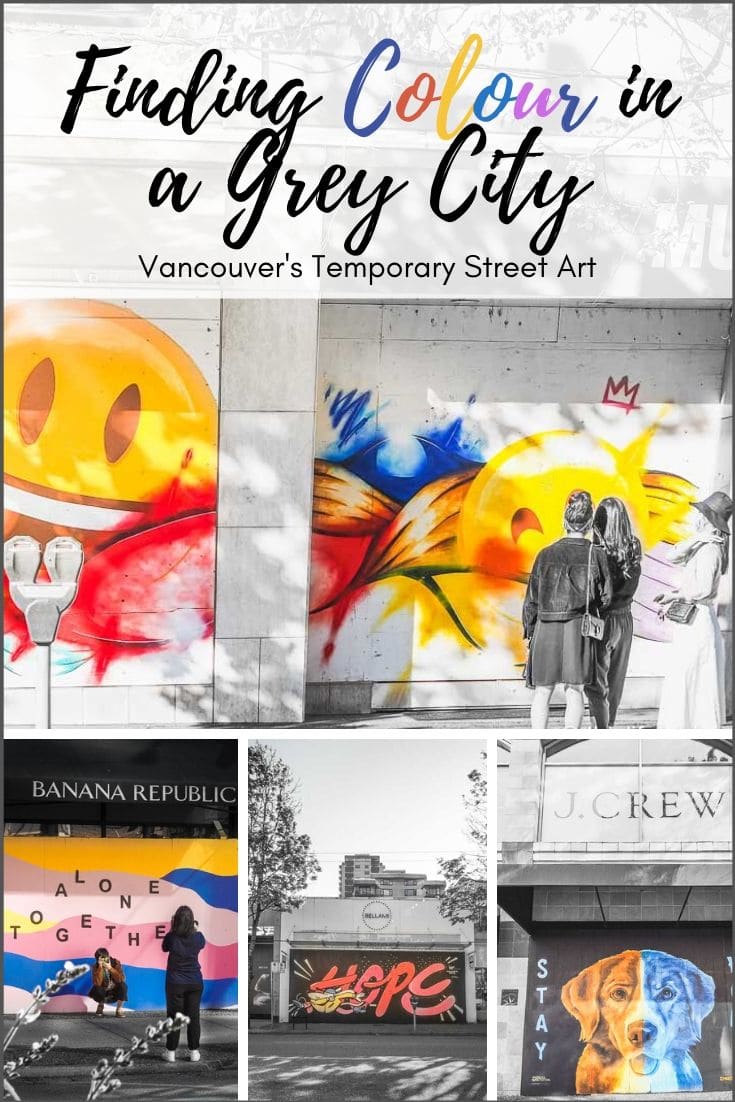