I was recently tipped off by Trosten Jacobi of Might Travels regarding an epic fare battle which was leading abnormally cheap flights for you and I. He sent me an email about an around the world fare for under $1000 a couple of days back. To be honest, I didn’t read too much into it as I thought I was being spammed. To my benefit Trosten followed up a day later with this:

Dear Shaun, sorry for another email – but these crazy fares just got better!

I just booked a trip to Europe and Asia for $130 (all taxes included).

The deal that was posted yesterday was awesome enough – a full round the
world fare for under $1,000.

Many dates are available – samples dates are October 20th and October 27th.
You can stay as long as you want in Europe. These fares only come up on
Priceline so keep on searching a little.

This is a fare that is hard to resist!

All the best,
Torsten Jacobi

My attention was captured. I spent a couple hours looking at flight options on Priceline and although I was not finding the same flights for $130, I was seeing them for $271…which is UNREAL.

I hummed and hawed about dates and plans then finally decided on Febuary to Milan from New York then Prague to Tokyo in March. I clicked pay and smiled. In my head I was already planning out where in Europe AND Asia I would hit next spring when this happened:

I quickly changed dates and re-typed the required info. Same thing. I selected different routes and dates. No change. I ended up spending a couple hours fighting with it but could not get past this message. It was frustrating to say the least as I had to reenter information each time and wait while William Shatner did his best.

Wipe that smug smile off your face Kirk, it ain’t working.

Frustrated and feeling defeated I gave up and put this day-dream behind me.

Did I Really Put it Behind me?

Yes. Or so I thought.

I checked in with Trosten this AM and was surprised to find that the fares are indeed still out there and that readers of his blog were successful in booking some of these great deals – including flights to Africa.

OK, I will try for a few minutes.

2 hours past and no luck. I got on to Priceline chat support in an effort to figure this out. They told me, in a round about then direct way, that I should book elsewhere as their inventory is not updated as fast as other sites. Wow Priceline, not winning a fan on your flight side.

Curious, I headed over to FlightNetwork.com, punched in some dates and waited. I wasn’t expecting much and didn’t pay attention to dates or details. Like the chubby kid with high libido I once was, I was use to rejection.

Not this time fatty. 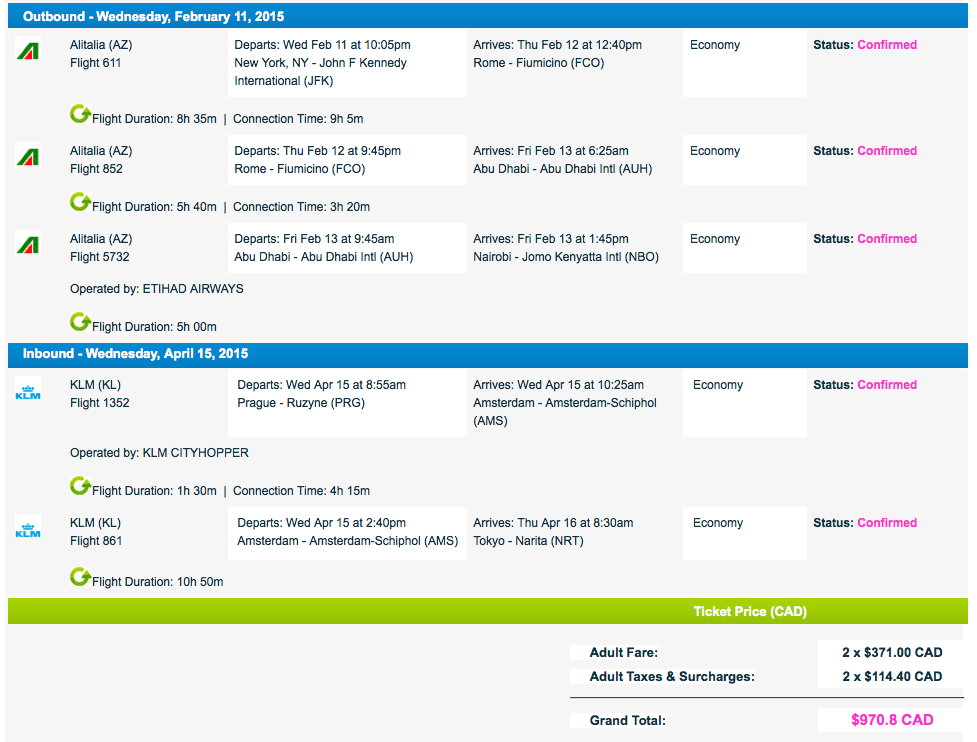 So looks like I am going to Africa…then Asia. FlightNetwork does allow changes the day of so I do have time to massage the dates to make it work.

What you Need to Know

If you want to get in on these deals you should act now. As Trosten points out on Might Travels, these kinds of errors don’t last long.

Note: this deal is for the adventurous. They are one way flights with gaps in-between. If you are a travel nerd like me then this will excite you as you can piece together the rest as you go. For tips on how to do that on the cheap see here: How I Booked an Around the World Trip for under $1600.