After a night of enjoying Antigua’s vices of chocolate, cigars, and rum, we found ourselves in a bit of a spot. It was 2 AM, the streets were deserted, and we were a 15-minute walk (or 25 minutes stumble) from our Candeliera Hotel. Although I found the people of Guatemala the friendliest of my time in Central America, I was well aware of the crime in the country. Being a couple drunk and lost tourists was setting us up to be a couple of statistics. This fun night quickly turned to a brisk walk…or fast zigzag. Thankfully, we found protection in the most unthinkable way. This is my story about that time I was escorted home by a stray dog in Antigua.

Perro to the Rescue

Around the time Erin and I started arguing about directions, we encountered another concern – Antigua’s street dogs. Although nothing new to us (we met our share of territorial packs while living in Chiang Mai), when one starts running at you for no apparent reason, it is cause for concern. I tried to play it cool in a “don’t panic and it won’t eat your foot” way, but Erin wasn’t having it. Probably because the lone dog running at us from behind was pushing us straight towards a pack of three other dogs. As I mentally prepared myself for the guilt of kicking a dog for the first time, something odd happened. The dog ran past us and straight into the pack, fangs exposed and ready for a fight. 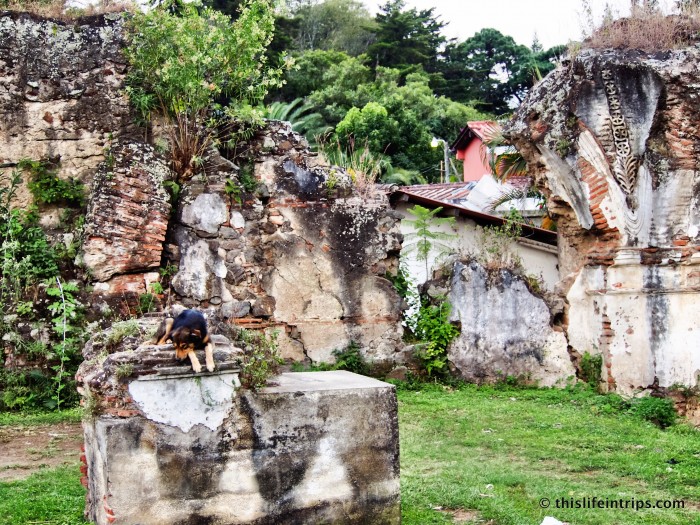 To our surprise, the pack dispersed, leaving the brave little perro standing proud in front of us. What happened next was even more surprising. Instead of turning on us to feast, he wagged his tail and trotted back to us…then proceeded to walk us home! Along the way he barked at other dogs as if to say “back off, they’re mine!” always returning to our side afterwards.

This was hilarious but lost on us at the time. We were just happy to have a local show us the way. Then, just when we started to relax, a car blaring music passed us, slammed on the brakes, and reversed.

We did our best to ignore the unwanted attention by continuing on, paying no regards to the stopped vehicle that was now rolling down its windows. Erin started to talk to the dog in Spanish to make it seem like we knew what the F we were doing out in the middle of the night in a random burro of Antigua. Yup, just a couple locals walking their pup at 2:00 in the morning. Nothing to see here.

After what felt like a full-on Guatemalan Christmas Parade (as I found later, that’s a really long time), the car rolled up its windows and spend off.

To be fair, the people in the car could have just been concerned for our stupid gringo ass’s and wanted to help. In our minds, they wanted our shit and perhaps, a kidney or two.

As we got to the Candeliera Hotel we thanked the brave perro for his service, but he wasn’t finished with us. When the night staff opened the door the dog ran in. We sadly had to shoe him out. Feeling bad, Erin tried to ask the night watchman (in broken Spanish) if they had food we could give the dog. With a polite “No” we were once again saying our goodbyes. The poor dog looked confused as if to say “I walked you drunks home and this is how you repay me??”

When we got back to our room Erin remembered we had a granola bar and went back out to give it to the dog. Sadly, he was gone. Erin gave a quiet shout of “perro?” to which the pup heard and started running back from a distance in a full-on sprint.

So let this be known, Guatemala is home to some friendly people but some even friendlier dogs. By no means take this as “hug a stray dog.” Take it as “don’t judge a book by its cover” and that help can come in strange forms if you let it.

What say you?
Thoughts on that time I was Escorted Home by a Stray Dog in Antigua?
Let’s hear it!

For more stories from Central America and beyond see HERE.

Although I was provided with a complimentary stay at the Candelaria Hotel,
the experience, opinions, and odd escort home are my own.