For such a tiny nation, Bahrain packs a lot in. From getting lost in its souq to visiting a centries old fort, there’s no shortage of interesting things to see and do. After spending a full 24-hours touring the country tip-to-tip I have complied some of my favourite highlights. Since I was visiting during Ramadan, this list also includes some sights and attractions that will bring me back for another visit.

With that in mind, here are 12 unique things to do in Bahrain on a long layover, weekend visit, or cruise stop.

Like other Gulf nations, Baharain has taken to reclaiming land from the sea. Unlike other Gulf nations, Bahrain has done so more out of need rather than say building the world map out of islands like the abandoned outside of Dubai. Bahrain’s natural borders are just 257 square miles. Through expansion, the tiny country has added a whopping 122 square miles, almost doubling in size. There are ambitious plans to further expand however currently as is, Bahrain is in the top five countries that have reclaimed land from the sea.

Much of this reclaimed land is on the north shore around the capital of Manama. This is best experienced by strolling the Avenues Park, a nice walkway along the water. There you can take in some of the unique architecture including the drill bit-shaped Wyndham Grand Manama and the iconic Bahrain World Trade Center 1. This area is also home to some of the only greenery on the desert island as well as some shopping centres and eateries.

Bahrain hosts a Grand Prix every March which brings in fans from around the globe. Even if you aren’t in town for the actual race, you can still visit and tour the track. This includes a visit to the roof-top of the Sakhir Tower for 360-degree views of the course as well as the control tower where you can play with the camera systems used during the race.

You don’t have to venture too far outside of Manama to understand where the wealth comes from. The country is rich in oil with wells dotting the interior. Interestingly, the world’s first oil well in the Arabic nations was in Bahrain in 1931. This quickly lead Bahrain to become the region’s wealthiest country and supported its neighbours. Today, this script has somewhat flipped.

You can visit this well along with a small museum dedicated to the country’s oil pumping history.

Water The Tree of Life

In a sea of sand and oil rigs, a massive tree in the middle of it all seems unlikely. Still, the Tree of Life has been defining the odds for over 430 years.

Visitors can take in the miracle that has become known as the Tree of Life and offer it a drink. You can also wander the area around the tree and discover ruins from a settlement that once stood 500+ years ago.

Bahrain’s largest mosque is the Al Fateh Grand Mosque. In between prayer and special events, visitors can take tours of the beautiful building and get an insight into Islam from a knowledgeable guide.

Unlike neighbouring Dubai, Manama and Bahrain have more to offer than shiny tall towers and shopping malls. The Qal’at al-Bahrain, for example, dates back to 2,300 BC. Over the years, the area changed hands and functions several times. Initially a harbour town, the location was the heart of the Capital of Dilum, the area’s most important ancient civilization. In the early 1500s, the Portuguese used this spot to establish a fort in an effort to protect the lucrative trade route Bahrain had come to find itself on.

Be sure to visit the Qal’at Al-Bahrain Site Museum to get a full appreciation of the ruins and history of the area.

Once known as the Island of Pearls, the water off of Bahrain’s shores are full of oysters. Divers can collect up to 60 oysters as well as whatever may be inside. This adds an extra level of excitement to this unique thing to do in Bahrain. Guided tours are offered from Manama and take half of a day at a minimum.

Oysters and pearls aren’t the only things to discover in Bahrain’s water. Scuba diving is one of the most popular things to do in Bahrain thanks to the addition of an underwater amusement park. There you will find plenty of submerged structures to explore along with the sea life that now calls it home. This includes a Boeing 747, ships, and a sculpture gallery.

The island of Bahrain is connected to the Sadi Arabi mainland by the 24 km long King Fadel Causway. It’s a vital lifeline for the country and commerce. Every day some 100,000 vehicles pass over the causeway, carrying goods and services to and from the neighbouring countries. Smack dab in the middle is a manmade island that houses the border crossing.

Visitors to Bahrain can take a day trip to Dammam, Sadi Arabi through a guided tour, Even a drive along the causeway to the border is worth the trip for the drive. If you do decide to visit Saudi Arabia, be sure to apply for a tourist Visa at least three days in advance.

Shop at the Manama Souq

Next up on this list of things to do in Bahrain is visiting its famous Manama souq. Like other Souques in the region, you can find pretty much anything here along with its knockoff replica. From spices and teas to knock of Nikes, you can find it here and at a great price. I recommend having a guide with you to make haggling that much easier.

Kids of all ages will enjoy a visit to the Royal Camel Farm. Visitors can get up close and personal with camel rides and feedings. Entrance and parking are free.

Wrapping up These Unique Things to do in Bahrain

There you have it, 12 unique things to do in Bahrain on a long layover, weekend visit, or cruise stop. From visiting camels to a tree that has been defying the odds for hundreds of years, there is no shortage of interesting things to see and do in this Persian Gulf island nation. Did I miss anything on this list? Let me know in the comments below!

What say you?
Thoughts on these unique Things To Do in Bahrain?
Let’s hear it!

Although I was provided with a complimentary tour of Bahrain by ToursbyLocals,
as always, the experience, opinions, and camel feedings are my own. 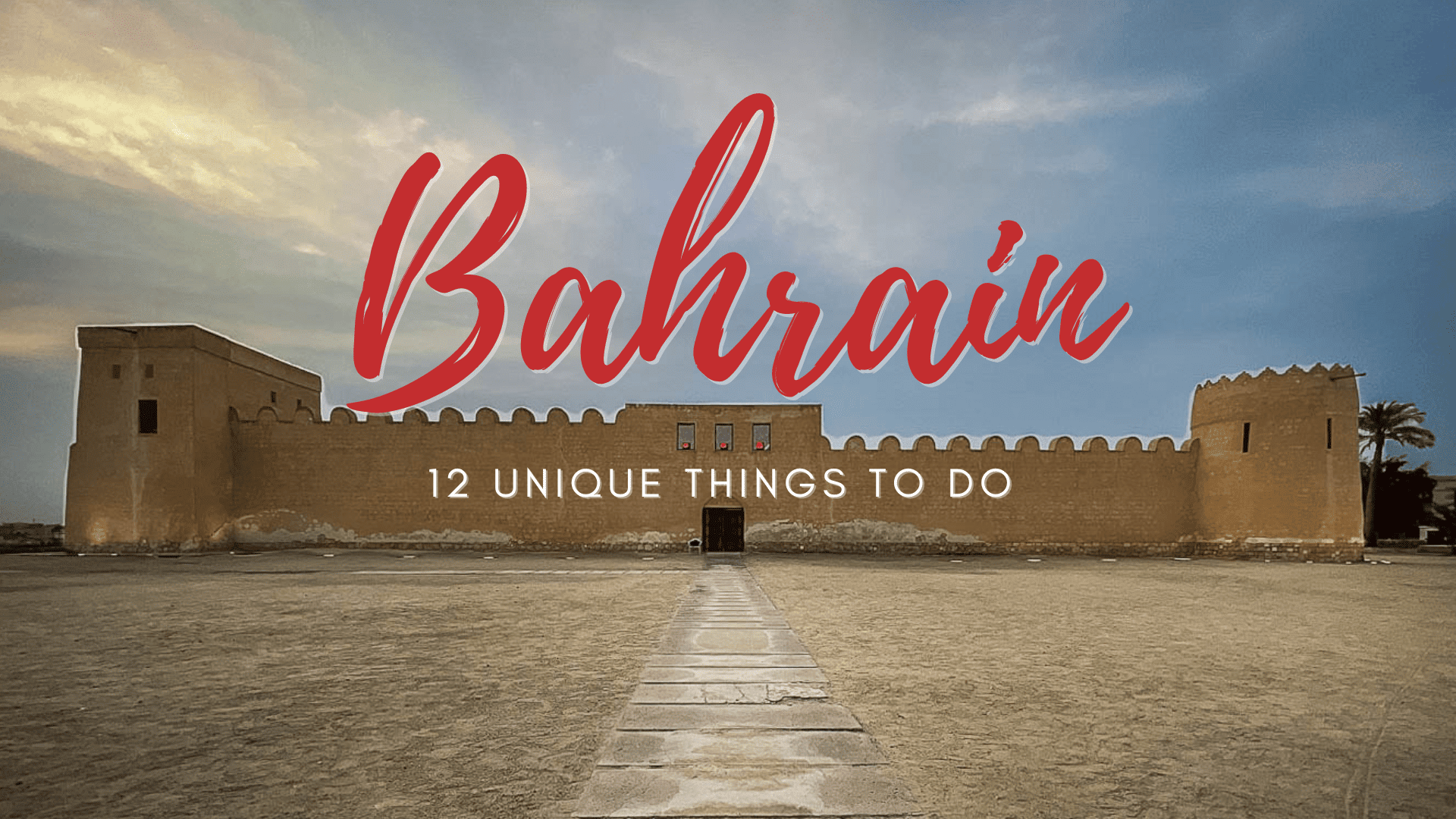 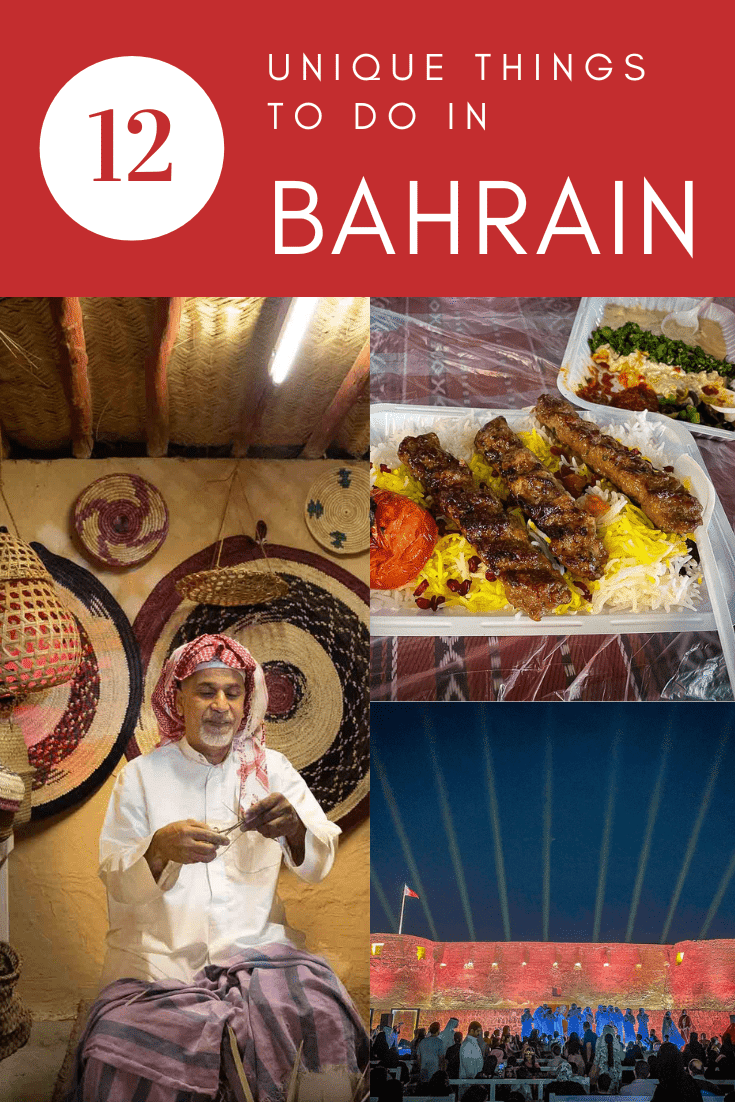 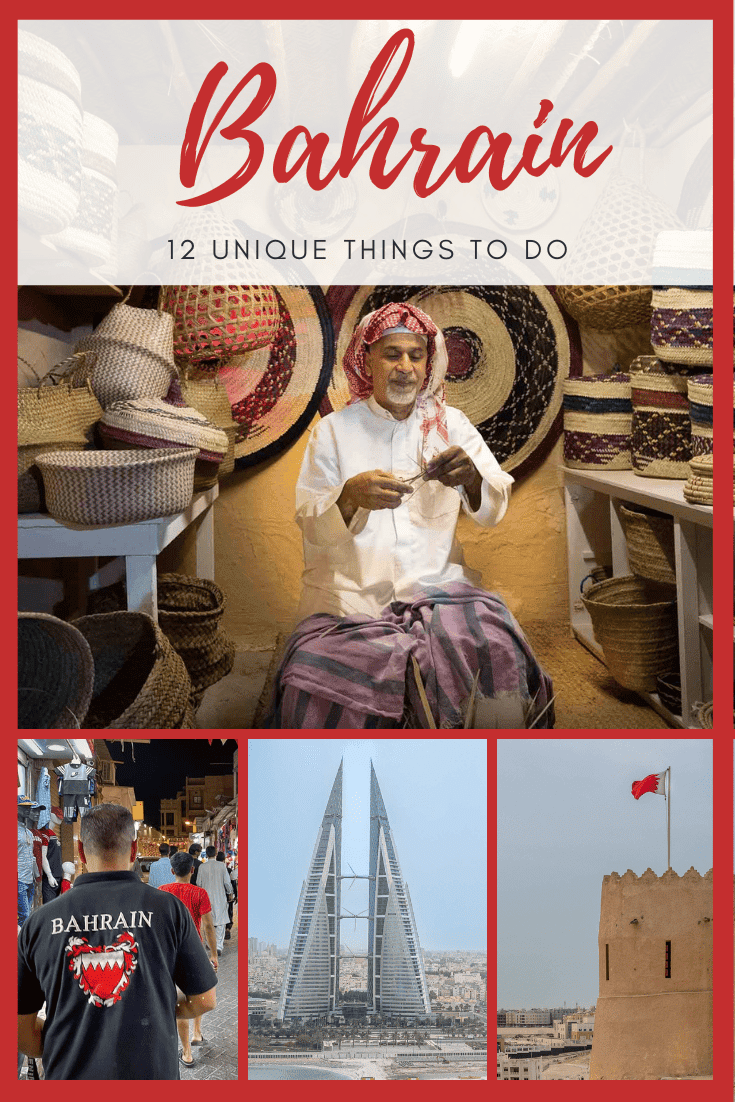