From the Tree of Life to celebrating Ramadan with locals, here are my takeaways from an eventful Bahrain layover.

If you’ve been following along, small countries fascinate me. They typically offer much to see within short distances and make for the perfect layover stop between destinations. I have enjoyed short stays in Liechtenstein, Luxembourg, Malta, and Singapore. Now, on my trip to the Middle East, I turn my sights on Bahrain, the tiny island nation in the Persian Gulf just 25 kilometres off the coast of Saudi Arabia.

Like many of its Gulf neighbours, Bahrain has two sides – one of oil and the wealth and opulence that comes with it, and an one of strong traditions dating back centuries. With just over 24-hours on the ground, I headed out to cover as much of the country as possible. Here is my take on the things to do in Bahrain on a long layover.

See Bahrain With a Local

A couple of weeks prior to my Bahrain layover, I had an excellent layover visit in Panama City with a local guide booked through Toursbylocals. I was visiting on a Monday, a day when everything in the city is seemingly shut down. Having a local guide to show me around really helped to make the most of the visit and filled the time with insight and knowledge only a local can provide.

My Bahrain layover was during Ramadan, a time when the vast majority of the country is fasting during the day. As such, most stores, restaurants, and attractions are closed. To navigate this unique time of year I turned to ToursbyLocal once again for my layover tour. I was paired up with Fadel who was able to show me around his home country as only a local could.

Do You Need a Visa for a Bahrain Layover Tour?

Before diving into this guide, make sure you know the requirements for visiting Bahrain. Depending on where you are from, you may require a visa. Check out the official Bahrain government website for visa requirements or use the form below to see if you need one.

I am Canadian and required a Visa. Thankfully, getting one is fairly simple through the official site. With about 15-minutes of clicking and paying a small fee, I submitted my application for an eVisa. It was in my email inbox less than three days later.

If the above is a little too much effort for you, iVisa.com offers visa application services and can do the leg work on your behalf.

How Long Do You Need for a Bahrain Layover Tour?

I was in Bahrain for just over 24-hours which was more than enough time to see all of the country’s highlights, or at least what was open on my visit. That said, you can take a full or half-day tour and customize it to your taste. I recommend a minimum of six hours between flights. This will allow for customs, traffic, and checking back in at the end of the tour.

What Can You See on a Bahrain Layover Tour?

My day started with a hotel pickup from Fadhel. It was early afternoon in March at the temperature was already hovering around 35°C. The late departure was largely due to Ramadan. With not much open and Fedhel fasting, it made sense to start later. My flight out wasn’t until after midnight so had plenty of time to check out Bahrain. With a map of circled highlights, we were off.

The Avenues and Reclaimed Land

Like other Gulf nations, Baharain has taken to reclaiming land from the sea. Unlike other Gulf nations, Bahrain has done so more out of need rather than say building the world map out of islands like the abandoned outside of Dubai. Bahrain’s natural borders are just 257 square miles. Through expansion, the tiny country has added a whopping 122 square miles, almost doubling in size. There are ambitious plans to further expand however currently as is, Bahrain is in the top five countries that have reclaimed land from the sea.

Much of this reclaimed land is on the north shore around the capital of Manama. We strolled the Avenues Park, a nice walkway along the water, and took in some of the unique architecture including the drill bit shaped Wyndham Grand Manama (my hotel for the night) and the iconic Bahrain World Trade Center 1. This area is also home to some of the only greenery on the desert island.

Before leaving the area we made a stop on one of the newly filled in plots of land which was head-scratching for this visitor. It’s hard for me to imagine the massive towers and infrastructure that goes up on these patches of sand and was cool to experience this. I also got to see the traditional fishing boats docked nearby – an area that is typically bustling but, again, Ramadan.

Unlike neighbouring Dubai, Manama and Bahrain have more to offer than shiny tall towers and shopping malls. The Qal’at al-Bahrain, for example, dates back to 2,300 BC. Over the years, the area changed hands and functions several times. Initially a harbour town, the location was the heart of the Capital of Dilum, the area’s most important ancient civilization. In the early 1500s, the Portuguese used this spot to establish a fort in an effort to protect the lucrative trade route Bahrain had come to find itself on.

Now normally, guests on a Bahrain layover tour visit the Qal’at Al-Bahrain Site Museum however on my visit, it was closed. Again, this is where travelling with a local comes in handy. We walked the grounds while Fadel explained the history and fielded my questions along the way. The highlight for me was the recognition of wandering the grounds where fishermen worked thousands of years ago and the modern contrast of the skyscrapers watching over the fort from Manama.

Since attractions like the Qal’at Al-Bahrain Site Museum were closed due to Ramadan, I asked Fadel if we could drive to Saudi Arabia. The island of Bahrain is connected by the 24 km long King Fadel Causway and is a vital lifeline for the country. Every day some 100,000 vehicles pass the over the causeway, carrying goods and services to and from the neighbouring countries. Smack dab in the middle is a manmade island that houses the border crossing.

Along the drive, Fadel explained the close relationship Bahrain has with Saudi Arabia, calling the country a “big brother.” As such, travel between the two nations is easy and their currency is essentially at par and enforced by law. The causeway itself was funded by Saudi Arabia in 1986 at the cost of 1 billion USD. Since the port of Bahrain supplies a lot of goods to Saudi Arabia, this investment makes sense. So much so that a second bridge is in the planning stage.

We stopped at the border and took in the mirrored views of a mosque, McDonald’s, and observation deck on both sides of the border. Had I thought ahead I could have applied for a tourist Visa and visited Saudi Arabia for the afternoon.

If you are interested in visiting Saudia Arabia from Bahrain, you can easily coordinate a day trip with a guide.

You don’t have to venture too far outside of Manama to understand where the wealth comes from. The country is rich in oil with wells dotting the interior. Interestingly, the world’s first oil well in the Arabic nations was in Bahrain in 1931. This quickly lead Bahrain to become the region’s wealthiest country and supported its neighbours. Today, this script has somewhat flipped.

You can visit this well along with a small museum dedicated to the country’s oil pumping history.

The Tree of Life

In a sea of sand and oil rigs, a massive tree in the middle of it all seems unlikely. Still, the Tree of Life has been defining the odds for over 430 years.

We stopped to check it out and offer some water to the thirsty tree, a local tradition. On the walk up Fadel pointed out the remains of a settlement dating back 500 years. It’s suspected there once was a body of water here which brought people and the tree. The water dried up but the tree, and remains of the settlement, remain. Sifting through the sand Fadel picked up a chunk of stone used in the buildings and handed it to me. This blew my mind a little. In Canada, something like this would be in a museum.

Although it is open to tourists, it was, of course, closed for Ramadan. On the positive, I got to experience something truly unique instead. To mark the end of each day’s fast during Ramadan, local police set off a cannon. This announces to all within earshot that it is time for iftar, the meal that follows fasting. Based on how loud the blast was I would guess half the country got the notice.

Ready to eat we made our way to the Manama Souq and feasted on some kebabs and rice. The highlight here was watching Fadel tuck in with his hands, as Bahrainians do. It was impressive, to say the least.

After our feast, we strolled the narrow corridors of the Souq, window shopping along the way. Like other Souques in the region, you can find pretty much anything here along with its knockoff replica. I was on a mission to get a pair of shoes to wear on a trek in Oman, my next destination. Having a guide made haggling easy and scored my cheap pair for my upcoming adventure.

As part of Ramadan celebrations, the government holds various cultural events throughout the month. This was a nice bonus stop on the way to the airport where I was able to take in some traditional music and crafts. The highlight here was a basket weaver who was interacting with guests and making them something unique. I’m not sure how I landed on a horse but it was cute to watch.

Wrapping Up This Bahrain Layover

After taking in the cultural events, it was time to say goodbye to Fadel and head to the airport. Even though I was touring Bahrain during Ramadan, visiting with a local got me an insider’s look into a cultural and important religious event that I really had limited knowledge and appreciation for. Had I attempted this Bahrain layover tour on my own, I would have struggled and missed out on many unique experiences. This only solidifies my thoughts on visiting somewhere new with a local who knows it best.

For the full Bahrain tour itinerary along with how you can book and customize it for yourself, check out the ToursbyLocals website.

Where to Stay in Bahrain

If you are arriving on a late flight like I did you will likely require accommodations for the night. I stayed at the uniquely shaped Wyndham Grand Manama and can say it is one of the nicest hotels I have ever stayed in. The rooms are massive with high-tech everything. The views are nothing to scoff at either. It was reasonably priced and they also allowed me to check out at 2:00 pm with no additional cost!

What say you?
Thoughts on these Things To Do on a Bahrain Layover?
Let’s hear it!

Although I was provided with a complimentary Bahrain layover tour by ToursbyLocals,
the opinions and Ramadan experiences are my own. 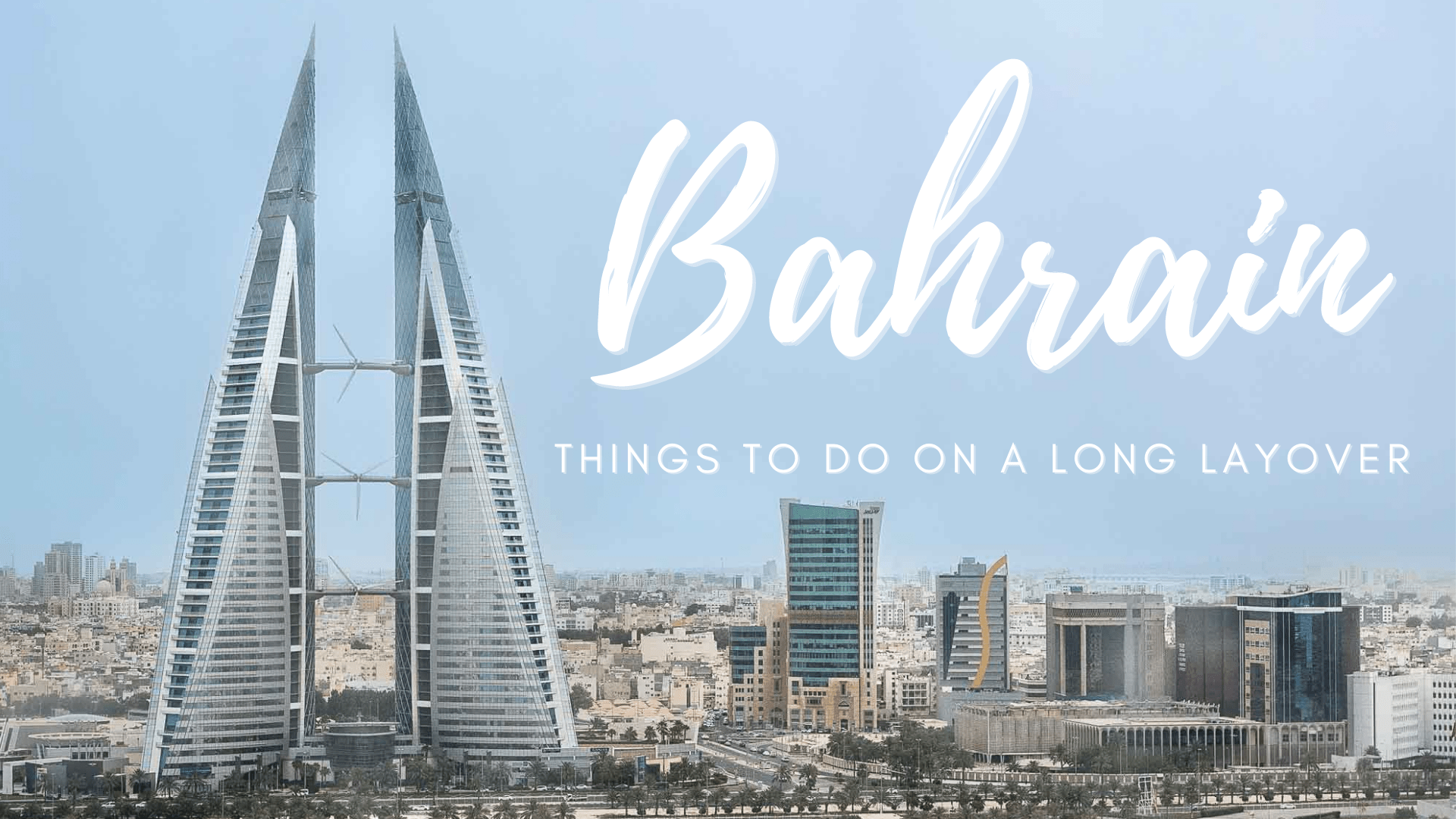 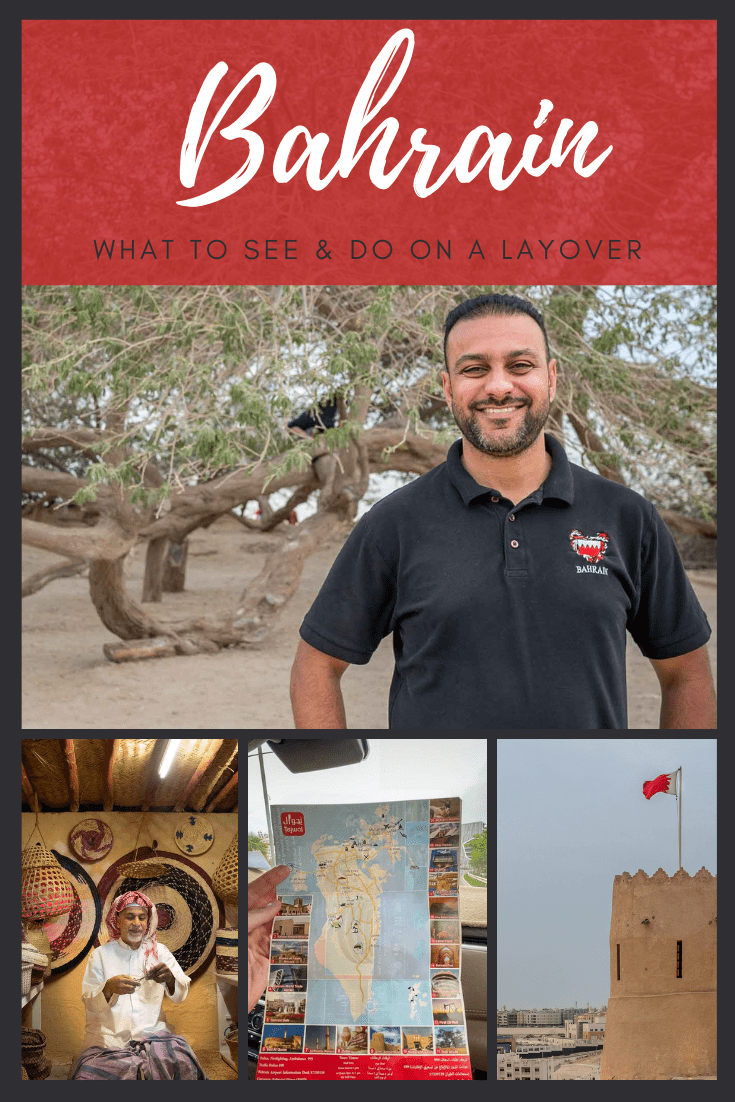 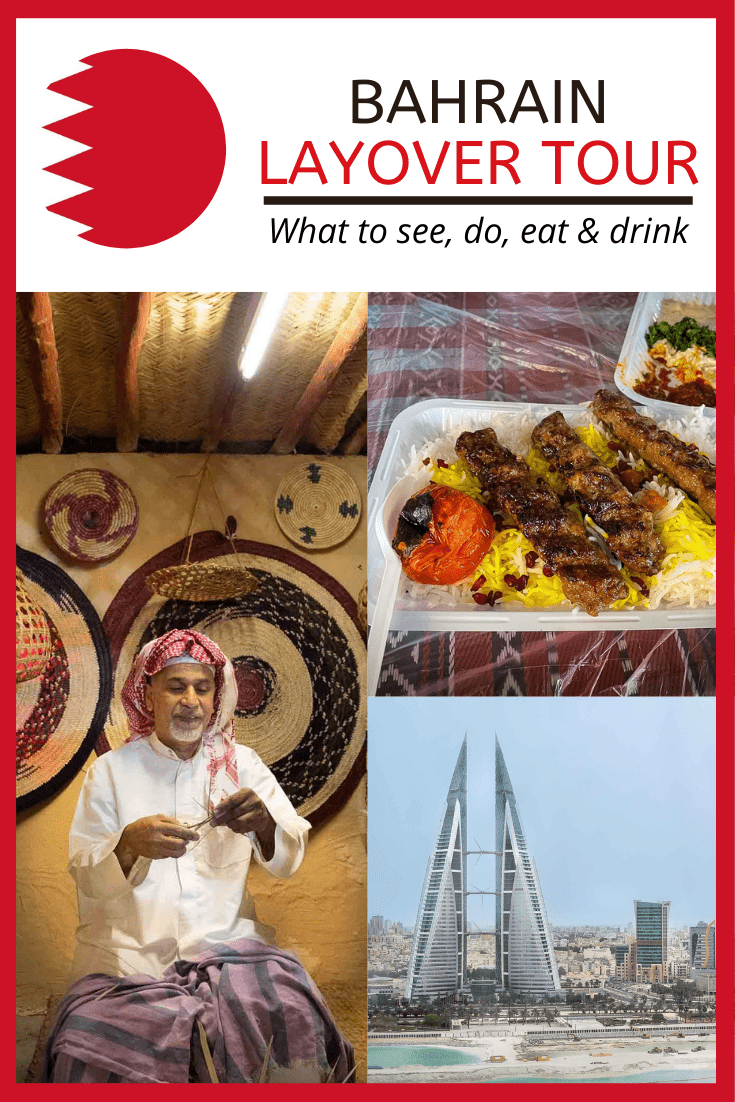 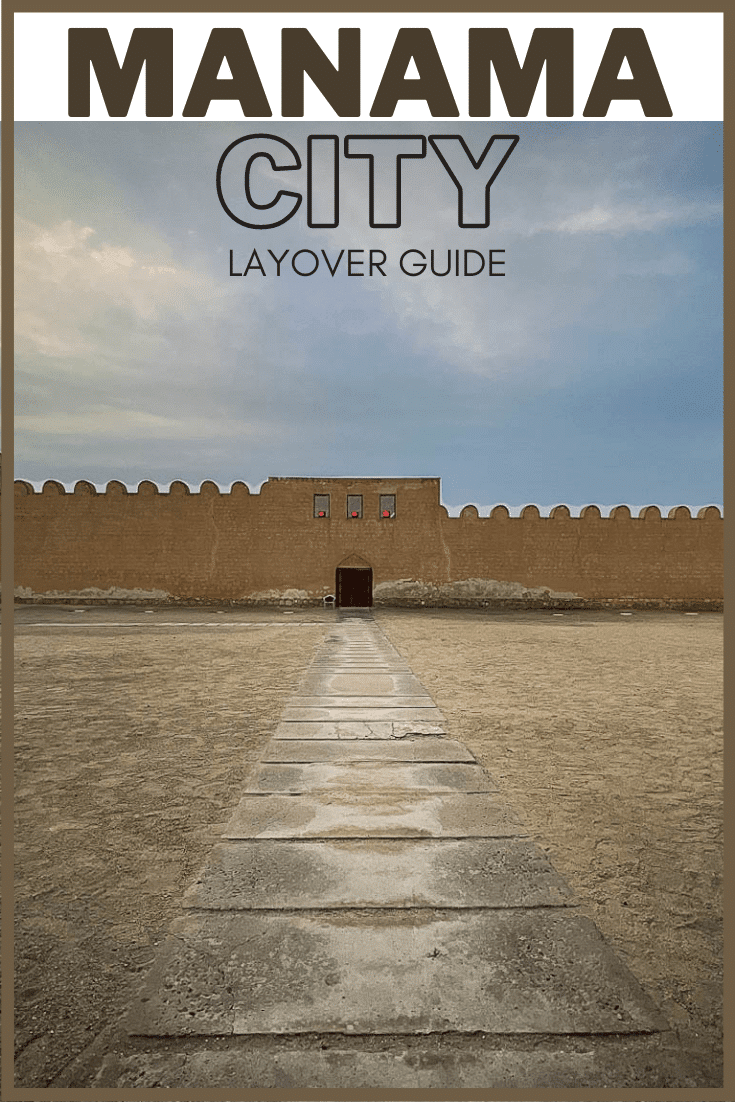