For my first trip to Sri Lanka, I was super excited, specifically, for my three days in Colombo. This excitement turned to slight concerns as I researched what to do in the capital city. With blog post after blog post panning the optically interesting city as dull, I began to question if three days in Colombo was too much. Here’s what I found.

With less than favourable reviews, I was determined to give Colombo a chance. Arriving from an extremely crowded and polluted Delhi India, I thought this was an easy ask. Leaving the airport Erin and I were shocked to find a four-lane highway leading into a modern downtown Colombo. Lined with construction cranes and new high-rise buildings, the city gives off the impression of prosperity and wealth. At the centre of it all, the new Lotus tower.

Turns out this prosperity is somewhat of a façade thanks to heavy investments from the Chinese. The boost in infrastructure is thanks to China’s investment in the country. This includes a “free” shipping yard, new roads, and hotels. This economic boost has come at a cost as Sri Lanka is struggling to pay off its debt leading to China taking over. Sadly, this picture is playing out at several seaside countries in the Indian Ocean. It is part of China’s New Silk Road and the implications and motives are concerning.

Even though it was a Sunday, the streets were empty. Gone was the sea of faces, occasional cow, and constant honking that became the norm from our time in India. With that we took Colombo as laid-back and safe, letting our guard down in the process.

As I would find with my three days in Colombo, the city is a bit scammy.  With our bags dropped at the super-modern an awesome OZO Colombo hotel, we set out to get some rupees exchange. As we made our way to the currency exchange place suggested by the front desk, a hotel employee on his break offered to walk us there. Seeing he was with the hotel, we agreed. This led to him telling us the place was closed but gave us a suggestion on where to go. Erin was extremely sceptical but I was trusting the system. An annoying and rip off Tuk-Tuk ride and an unwanted stop at a jewellery store later, I had to admit to Erin that I goofed up.

This, sadly, wasn’t our only scam encounter. Nowhere else have I been followed and had to turn away Tuk-Tuk rides like Colombo. This includes Thailand. T

That said, this, and getting ripped off on a SIM card are just minor issues and we never felt unsafe.

My biggest tip and take away from my three days in Colombo is to use Uber. We quickly found that we were grossly overpaying drivers and taken for a ride. We didn’t discover this till the second day. Our loss is forever your gain.

What Is There to See in Colombo?

After our first rip off Tuk-Tuk ride, we arrived at Gale Green. Touted as an expensive promenade where locals fly kites and relax, we found none of this. Just an empty dirt patch and no escape from the midday sun. Tip number two: check the hours. Gale Green apparently comes alive at night. Sadly this mess up in time management would play out elsewhere on my three days in Colombo.

By far Colombo’s most iconic structure is the candy stripped Jami Ul-Alfar Mosque. This unique place of worship was built in 1908-09. It is a mishmash of architectural styles including Gothic revival, neo-classical, and Indo-Islamic.

Access is free as is the cover-up for female visitors who can visit the first floor only. This, coupled with the heat trapped under that robe, did not sit well with Erin as I was off snapping pictures and talking to locals.

The Dutch Hospital is one of the oldest buildings in the Colombo Fort and is a reminder of Dutch colonial times. Dating back to the 17th century, the Dutch Hospital was built to support staff of the Dutch East India Company. Today it houses shops, restaurants, and cafés – all of which were really quiet during our visit.

Our closed/quiet tour of the city continued with a visit to the Independence Arcade. Not learning our lessons at Gale Green or The Dutch Hospital, we found yet another historical structure turned empty shopping complex. Still, as the former Jawatta Lunatic Asylum, its history is at least interesting.

Although the arcade itself is a bust, the neighbouring Independence Memorial Hall is not. This national monument was built to commemorate Sri Lanka‘s independence from the British in 1948. Aside from it being a unique building, its design provides a refreshing cross-breeze and escape from the high noon heat.

What is There to Do in Colombo?

Underwhelmed by the sites of Colombo, we decided to take a vantage of the cities best feature – its hotels. There’s no shortage of accommodation options in the city, many of which boast rooftop bars and restaurants. On top of that, these new and swanky hotels won’t break the bank. 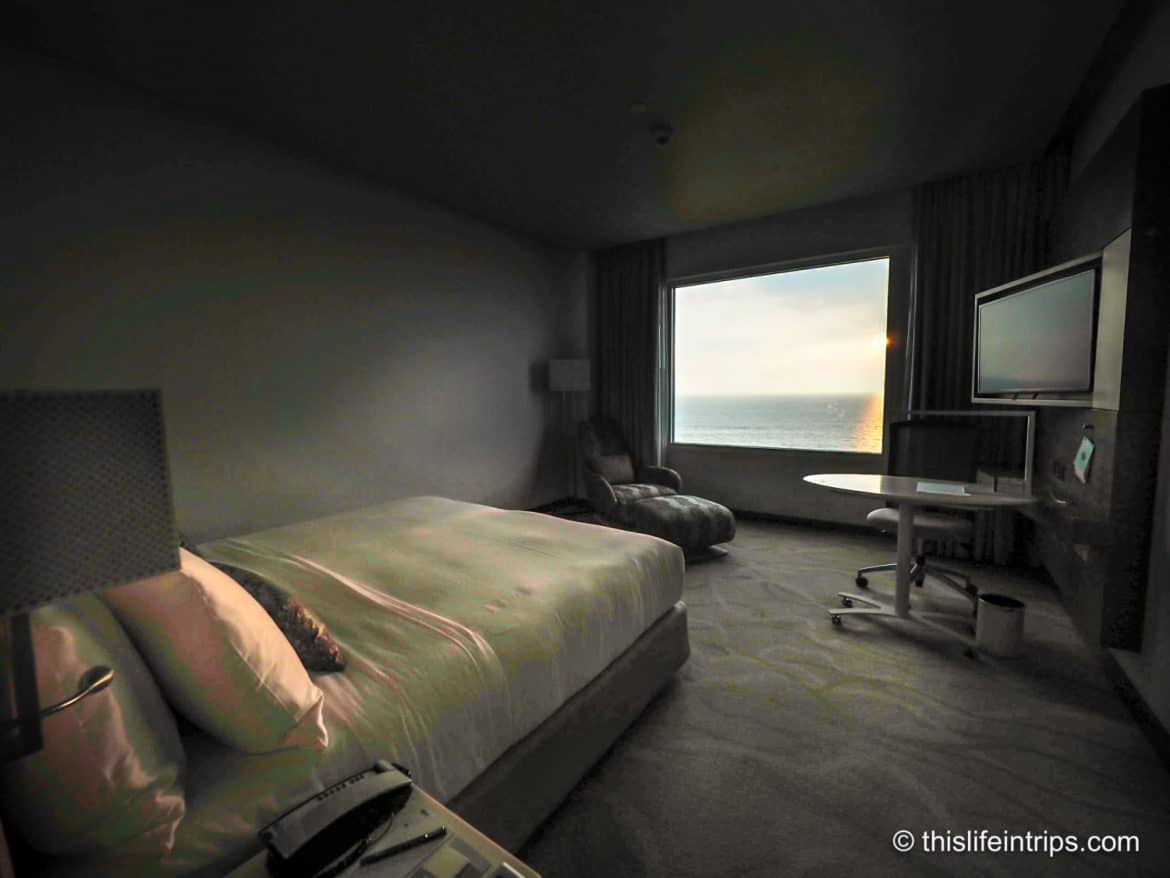 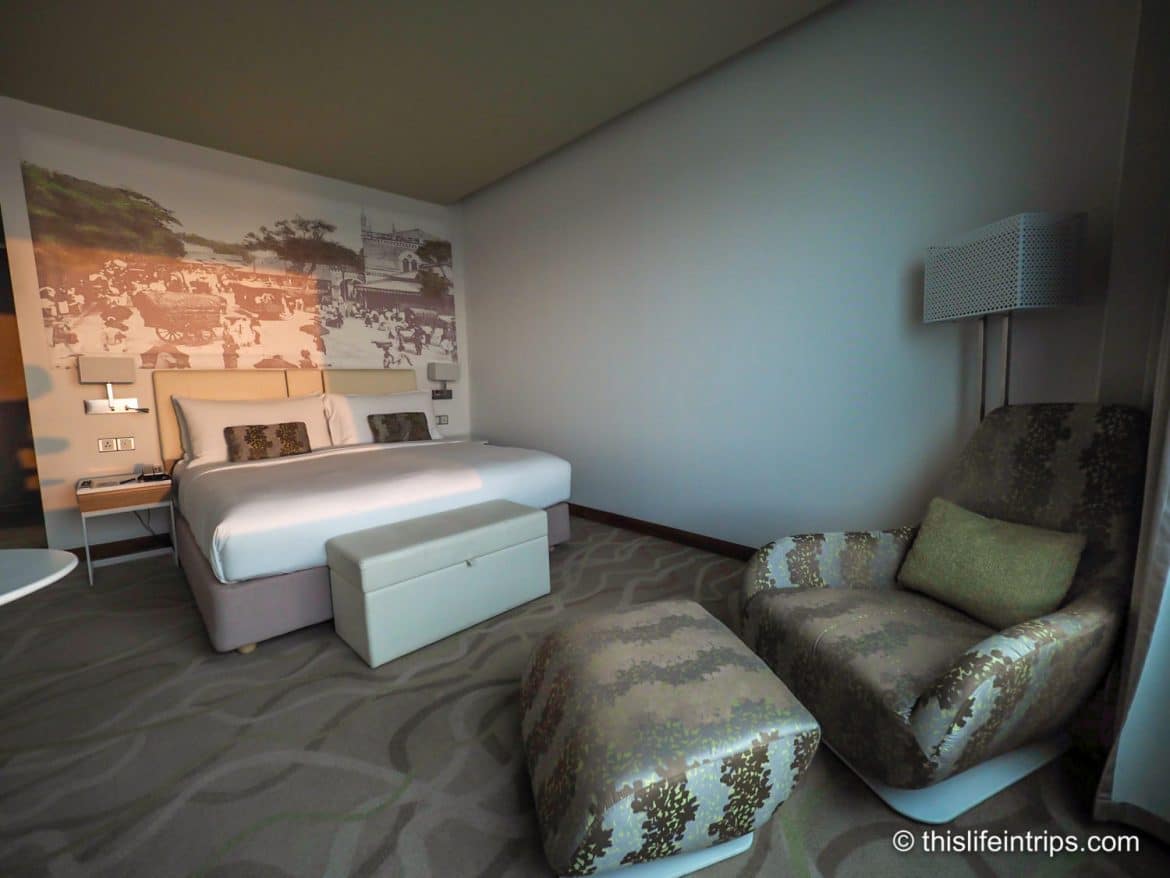 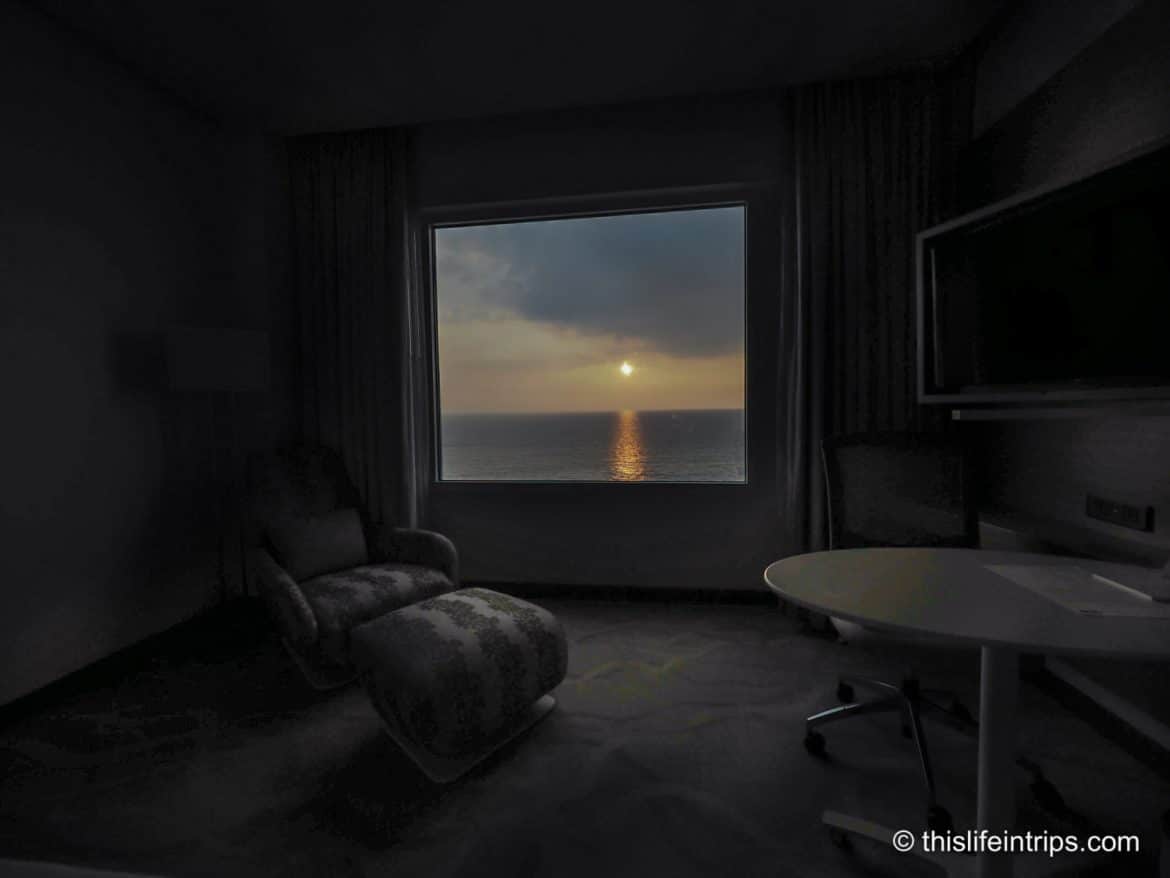 Our three days in Colombo highlight was without a doubt our stay at the OZO Colombo hotel. Besides our ocean view room that was super modern and comfortable, it has an incredible rooftop bar and pool. As we were visiting on the tail end of monsoon season, this rooftop provided an excellent view of sunsets and thunderstorms over the city.

With a great happy hour and food menu, it is a great place to recharge. I spent a lot of time here getting caught up with work and taking in incredible sunsets over the Laccadive Sea. 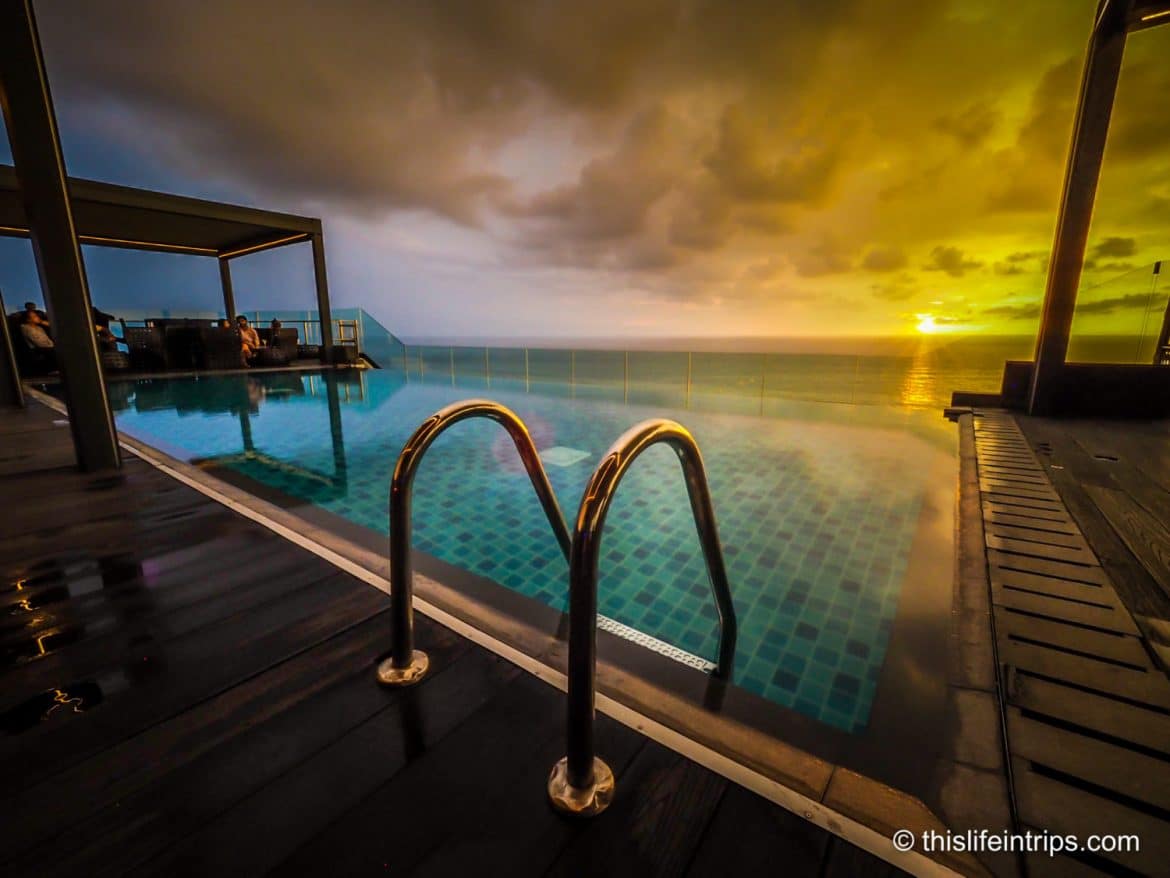 On our tail end of our time in Sri Lanka, we stayed at the newly built Wonder Hotel (formerly Dwell). This tropical-themed property offers large rooms and a rooftop bar with great views. It made for a great way to cap off our trip through Sri Lanka.

What Should I Eat & Drink in Colombo?

Although Sri Lankan food does not crack my top 10, I had some incredible local meals while in the country…just not in Colombo. This was largely due to spending most of our time in hotels where they cater to tourists. Still, we did find some great eats and drinks in the city. Here are my favourites.

Listed as one of Asia’s best restaurants in 2019, this seafood lovers paradise is a must-eat location in Colombo. Located in the 400-year-old Dutch hospital, the ministry of crab features Sri Lankan seafood like nowhere else. The meal starts by selecting your crustacean, size, and preparation style. I went for the chilli crab and it was awesome. Don’t forget the wet napkins.

Throughout the city, you will find vendors selling curious fruits and vegetables covered in spices. Get the chilli coated mangos for a tasty treat on the go.

Hoppers, Samosas, and Kottu, (mix of grilled meat, eggs, vegetables and roti) are all great options while exploring the streets of Sri Lanka’s capital.

About as close to water as a beer can get it, there’s no avoiding the countries favourite brew. Although watered down, it does pair extremely well with a rooftop sunset.

Last up on my three days in Colombo drink list is a happy hour visit to Kaema Sutra. This Tiki-themed bar at the Shangri-La hotel serves up creative cocktails in even more creative mugs. The best part, the prices are shockingly low! A Sympathy for the Zombie will cost you just LKR 800 ($5!). They also serve a delicious Lychee Colada.

Note: The Shangri-La hotel was recently and unfortunately part of the terrorist attacks in April 2019 over the Easter weekend. My visit was prior to this and am unsure if the Kaema Sutra bar is affected by the damage or not.

Where Should I  Stay in Colombo?

As mentioned above, the rooftop pool and bar at the Ozo Hotel was one of the highlights of my three days in Colombo. What I didn’t mention is the service is tops, the breakfast buffet is awesome, and airport pickup makes it easy to get to. Plus, the rooms are modern and offer perfect sunset views. I highly recommend staying there! For the best prices search your dates below:

As my three days in Colombo wrapped up I felt bad that I wasn’t able to see beyond what other bloggers have already said. Sadly, with its financial state, it’s empty venues, and minor annoyances, it is not my favourite city to visit. Its extremist issues are also a fresh concern.

That said, I will say had I visited during a cricket match or visited the sites with locals this post would be different. Also, I did love my time at the OZO Hotel. If Anything, three days in Colombo offers an affordable luxury hotel escape before or/and after exploring the countries beauty beyond the concrete and construction.

What say you?
Thoughts on this Three Days in Colombo itinerary?
Let’s hear it!