Breaking up an 8 hour bus ride through Spain’s interior is never a bad thing. Especially with a Zaragoza Pit Stop. It can be scenic at times but for the most part it is like driving through a desert in California. A lot of dry hills,desert plant life, and giant bull silhouettes. Actually the latter is definitely unique to Spain. These enormous billboards that have become landmarks for the countryside were actually originally advertisements for booze. In the mid 50’s the Osborne Sherry company littered the Spanish countryside with these signs to promote their Brandy. In the mid 90’s Spanish law prohibited advertising booze like this so the now beloved symbols almost came down. Perhaps due to Spain’s patriotism or thirst for good brandy, the bulls were allowed to stay. 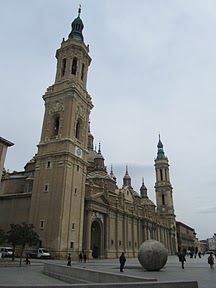 Our quick break in Zaragoza (pronounced Thar-a-go-tha with a heavy speech impediment) was a pleasant surprise. We were dropped off in the middle of town next to the Basilica-Cathedral ofOur Lady of the Pillar. Aside from being massive, this church has unique history. It was the first Church dedicated Mary. To celebrate this the Spaniards have Las Fiestas del Pilar which of course is an excuse to party…for nine days. During that celebration of food, fireworks, fine brandy and amateur bull fighting, flowers are offered at the church. Millions of flowers. So many that there is a spot in the church that everyone kisses that smells like flowers…and herpes. Erin confirmed this with a smooch. Another interesting note about the church is to During the Spanish Civil war three bombs fell through the roof and didn’t go off. Not one. I can see one or even two of them not going off, but three? That is obviously the work of a higher power…or the work of a factory that endorses 4 hour siestas everyday. 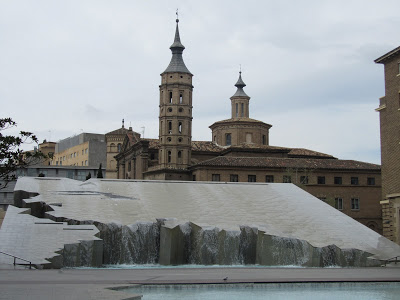 After our quick tour of the church and the square it lies on Erin and I had some great lunch tapas and coffee in a local bar. Back on the bus we asked some of the kids what they thought of the church to which some actually replied “There was a church?” Sigh.

Thanks for the Zaragoza Pit Stop. 4 hours of “It’s always Sunny in Philadelphia” to go. Such a wrong and great show. 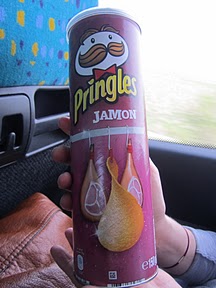