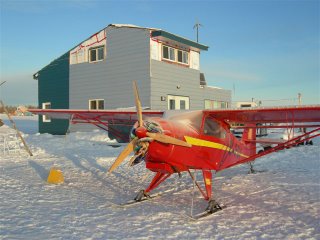 Sticking with the theme of the season, we spent our time in YK eating. The first day was highlighted (for me at least) by lunch at my brothers house boat where we had my
moms amazing cheese soup. After lunch Scott took Erin and I on a brief tour of downtown. Its weird how things seem so much bigger when you younger. We saw everything in less than 1/2 an hour.

That night we had a post Christmas dinner (another excuse to eat) at Al’s. After dinner we opened gifts. I got my mom a coffee mug with the following on it: (to be posted soon) 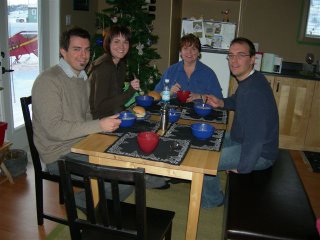 My mom, wanting to make a good impression Im sure, got Erin a very nice necklace with a small diamond in it. Nice to see that Erin’s first diamond came from my mom. 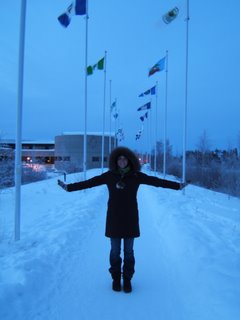 The next day we checked out the newly renovated museum only to find it was still under renovation and most of the exhibits were not set up. Still, a very nice building. That night my brother had dinner for 14 at his house boat which was fantastic. Hard to beat periogies and ham. Following dinner we had some fun with over sized sparklers and had shots of hot run in ice shooter glass’s, a tradition my brother is trying to start. 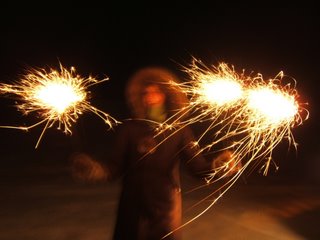 A few more drinks and it was off to the bars with my brother and my friend Shayne. No trip to YK would be complete with out visiting the Gold Range.

We were supposed to leave the next day but thought we couldn’t leave without having not only the best fish and chips intown, but the best in Canada as voted by Canadian digest.

Overly full, we fell asleep on the couch. We woke up about 10 then went to Al’s for a late dinner. Not tired, we went in search of some Northern lights. No such luck as it was a bit cloudy but it was a nice night so we played fetch with my brothers dog before heading home. Early flight to Edmonton in the AM.