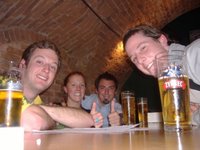 I really lucked out with the hostel I got in Krakow. Possibly one of the nicest and most entertaining so far. I met heaps of cool Ausies and had a great time every night. The first night we played a fun quiz game where my group, Team Ram Rod, got second place and scored 8 free beer. Not a bad start. Wow Krakow indeed.

During the day we took in the sites. The first day we headed to Auschwitz to visit the site of the worst concentration camp. It is absolutely disgusting how big it is. I knew the numbers before 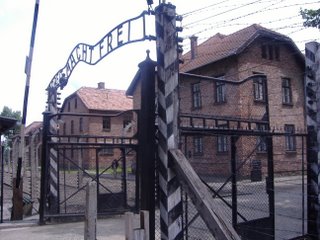 visiting but it was still a shock to see the size. Again, a very errie and humbling feeling to be in a place where so many people were tourtured and killed. One interesting and very respectful thing was that there are buildings converted to museums for each country that was harvested of Jews. One bukiding was dedicated to the women who suffered in the camp. In one room they have a huge pile of hair that was shaved off of the women. This was to be used by the Germans for textile purposes. This was particularly hard to see as this hair belongs to murdered women. Here is a picture of a sculpture dedicated to these women: 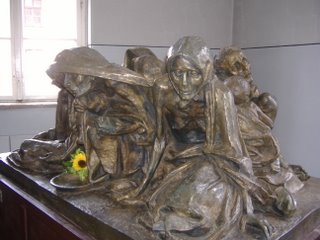 Another moving and again respectful thing to see was the sheer number of people visiting the camp and paying their respect. People of all race and nationality were there and all had teh same look of disgust, disbelief, and sadness.

After a very heavy day we ate and drank and were that much more thankful for it. 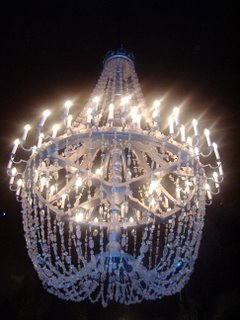 The next day I headed out to tour a salt mine on the outskirts of town. 125 meters or so below ground is a series of caves carved through rock salt. In the caves are numerous sculptures and chapels with beautiful pictures and chandeliers, all carved out of salt. I licked a “Last Supper” picture to make sure it is legit. 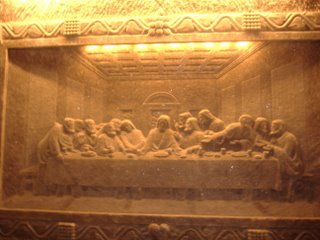 After a night of clubbing with a group of Ausies and Scots, it was a tough rise for a 6 hour bike tour. The weather was shyte and I immediately regretted leaving my bed but the tour turned out to be amazing. Jon, the tour guide, (and quiz master from the first night) was very knowledgeable about Krakow and its troubled past. We cruised around old town and by the university were Copernicus studied. We passed by a Jewish cemetery that was completely run down and overgrown with vegetation. This is simply because there are no living relatives to take care of the graves. A very real example of how a huge group of people were wiped out. 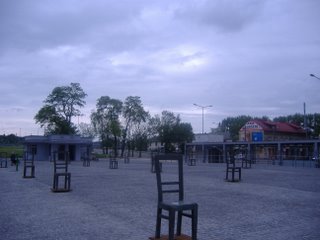 A huge highlight of the tour was visiting the site of the Jewish ghetto, a place I would not have made it to on my own. There, Jon told us of the horrible conditions the Jews were forced into during the war. This picture is where the Jews were packed like cattle into train cars by the thousands, and sent to their deaths. The empty chairs is a monument to them:
After that we were taken to Oscar Shindler’s factory where we were given the facts behind “Schindler’s List.” Turns out Oscar was not as kind as the movie made him out to be. He made money by exploiting Jews and was ok with that. He did however have a change of heart and bribed his way to taking over a thousand Jewish employees with him to another factory out of Krakow, almost certainly saving there lives. Schindler’s “list” of employees was typed up here: 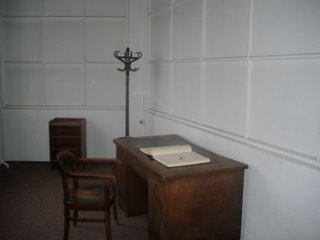 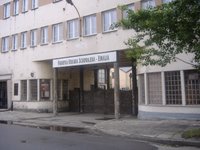 After the tour I was off to catch another night train, this time to Budapest.