Where the hell is Latvia? Somewhere you can run into old friends.

So I ended up in Riga, Latvia again on a last minute discussion. I was off to see the Bronze medal game between Canada and Finland. When I arrived at my hostel I ran into Jason, a college friend I had not seen in 5 years. Of all places. Shows how small this world is.

Jason had been to the last couple games and did not have any intention of going to the bronze game but that didn’t last long. We were able to get tickets relatively cheap but in retrospect it was a rip off. The game was terrible. Canada did not want the bronze medal and it showed. I was actually falling asleep at the game. That sucked but if it wasn’t for the hockey tournament I would never have came to Latvia and I would not have discovered how cool Riga is. 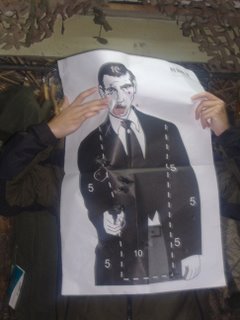 Where the hell is Latvia? Somewhere that has had a tough go.

I spent the next day touring the town and seeing the sights. I went to the museum of occupation which documents how Latvia and the other Baltic states were occupied from 1938 to 1991. Latvia has had a tough go. They have been passed between Nazi Germany and Communist Soviet Union numerous times.

I also got a good view of the city from St.Peters church.

Where the hell is Latvia? Somewhere you can shoot big guns.

The next day I hit the market which was huge. I got a pair of knock off Merels for 20 Canadian so I am happy. After that the real fun started: Ak-47 shooting in an old soviet bunker. This was very cool. If you look at the target I shot at, its a safe bet to say that he would be dead. Check out the grouping in the mouth!

Its 6 am and the Oil just beat the ducks in game 3. I watched it after going out with some Auzzies and Finns. We all watched the game and it was great. Another reason to stay in Latvia!

Anyway, go Oil! I m off to Helsinki in the AM for a few days. Hopefully I can get a VISA for Russia. Till then….