We came, we saw, we Shwartzed! 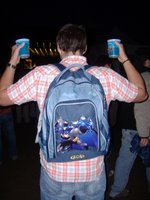 What’s a road trip without stopping at giant crap? Our first stop on our way to Montreal was a giant apple in which we climbed and got pictures. After that we passed through the thousand island’s area then downtown Montreal where we booked an excellently located hostel. Montreal is a neat city. A great mix of good people and food. We spent most of our time touring the busy cafe and shop lined streets. My to-do list for Montreal basically considered eating. Poutine, Maple syrup, crepes, and smoked meat…check, check, check and check! So good! We lined up at the famous Schwartz and Beauty’s dinner’s and they did not disapoint.

Other than stuffing our faces we did see a lot. The bio-dome was cool. It houses different environments and animals that live in them. They had some beavers that were very interesting to watch working on their home. Also on the site seeing side was the Olympic stadium, botanical gardens, Mount-Royal, and old Montreal. 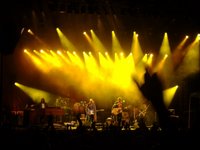 There was also, conveniently, a huge music festival going on headlined by Ben Harper. The weather was crap but armed with pocket ponchos and a trusty Batman backpack we still managed to see Damian Marley, Kid Kola, The Flaming lips, and Ben Harper. The Flaming Lips put on one of the most entertaining shows I have ever seen. They had groups of people on either side of the staged dressed in Santa suits and holding powerful flash lights, a stage hand dressed as Captain America, confetti cannons and large rubber balls for the crowd. If that was not enough the singer came out inside a large rubber ball and crowd surfed. Ben Harper was great, so great live.

Other than losing Erin while getting beer at the show the weekend was awesome. Another very hard place to leave.

Back to TO then off to the rock!