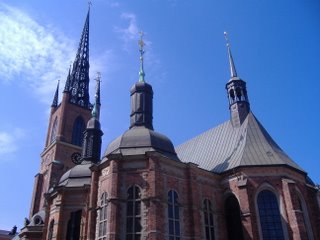 Let me just say this, Stockholm is a beautiful city. It reeks of beauty…it stings the nostrils…but in a good way! The architecture, the canals, the bridges and of course, the women. Sweden is the land of blue eyed bombshells…and I like it.

I arrived late last night after a delayed flight from Athens. It was not that bad as I sat next to a girl from Crete (Greek Island) who convinced me to go there next. I traced on a map of Europe, where I have been and she said that I am very lucky and she is jealous of what I have done. I am very thankfully for this opportunity but reminded her that she has all of this culture and beauty in her backyard and that she, like other Europeans I have met, takes it for granted. Kinda like I take the Rockies or Clair Martin for granted back home.

Self GuidedWalking Tour of Stockholm

Anyway, I spent the entire day touring the city. My guide book had a great walking tour that I followed. Almost everywhere you look there is a park, or benches, or steps that you can just sit and enjoy the surroundings. This is not common in a lot of European cities. Bench space is premium and is usually occupied by the homeless or pigeons…or both. I spent a lot of the day relaxing at the red bricked (8 million or so) city hall. It has a nice courtyard right on the waterfront and it was gorgeous out today. After that I visited the modern art museum and again, I am not one for art but there was some cool stuff there. Very odd but interesting pieces like a fluorescent light display or a huge canvas with only the edges slightly painted. There was also some different stuff by Picasso and Andy Warhol that was interesting. More up my alley was a section on Swedish furniture with an entire warehouse room on those Ikea type funky chairs! My kind of museum.

After that I visited some other historical sights in town such as the Royal palace and Knights Island. Tomorrow I have a nice little Friday planed. I am going to visit a 13 th century Viking ship and maybe the Ikea factory…or home depot, ya know…pick up some flooring, maybe some wall paper. After that maybe bed bath and beyond…I don’t know if there’s enough time though. I may just spend the day with my guitar in one of the many parks before catching the night train to Oslo. Still don’t have a place there so if anyone knows someone in Oslo….