Before diving into this post on Visiting French Lick Indiana be sure to check out the 2019 updates below! Thanks to an awesome reader and fellow Larry Bird fan, there is much more to see while visiting French Lick!

Why Visiting French Lick Means Something to Me

I am going to age myself here. NBA Superstar’s volume #1, that is when my desire for visiting French Lick was born. This “fusion of music and sports like never before” put this small Indiana town on the map for me. I received this VHS tape (remember those?) for my 10th birthday or so and must have played it a thousand times.

It’s a collection of pop songs and highlights from the biggest NBA stars at that time. From Magic Johnson dishing no-look passes to MJ taking off from the free-throw line, this mixtape had it all. I watched and studied and studied and watched. For some reason, no player resonated with me more than Larry Bird. The “Hick from French Lick.” A player that was past his prime before I even picked up a basketball. So of the eight or so players featured on that ridiculously awesome VHS tape, why did I gravitate towards Larry legend?

It definitely wasn’t his blond mullet or creepy moustache. Ditto to the short shorts. His passing ability and long-range shot are definitely a factor but what really makes Larry Bird an icon to me is the soundtrack of John Cougar Mellencamp’s “small town” on this hilariously edited tape:

Pretty ridiculous but in an awesome way right?

For a chubby white kid from a small remote town in northern Canada, this pairing made a lasting connection. So much so that in the age where every kid wanted to “be like Mike” I wanted to drain three’s and make plays. Beyond that, visiting French Lick Indiana, a town that my childhood hero called home, became an odd goal of mine.

It took more than a few years to get there but I did get there. Among snowstorms and unusually cold temperatures, we arrived in French Lick Indiana. The 10-year-old in me was vibrating with excitement. 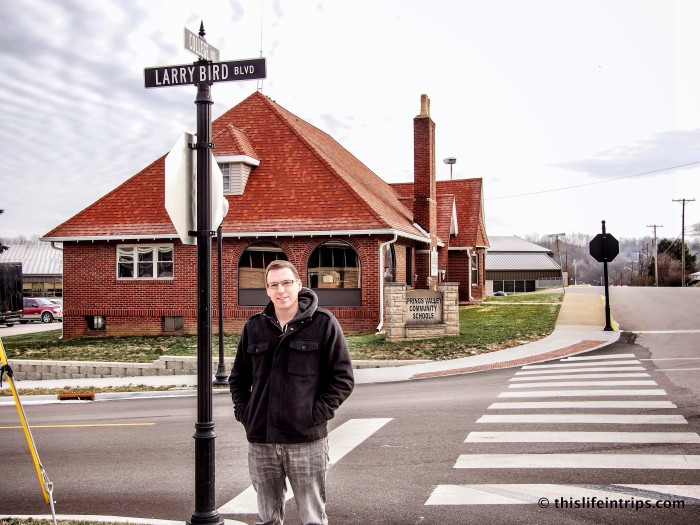 I was Born in a Small(ish) Town

Upon entering through the West Baden gates my jaw dropped. French Lick wasn’t the little hick town I imagined. We passed by the West Baden Springs Hotel in awe. This mammoth building is a US National Historic Landmark thanks to its massive dome. Our confusion continued as we pulled into French Lick and found a surprisingly charming town with a ton of character. On the right, there was a massive (MASSIVE) casino and hotel. On the left, tree-lined and picturesque hills. It was nothing like the dirt patch I envisioned in my mind and was by far the nicest small town we had passed through along the way from Canada.

After a less than fruitful stop at the French Lick Casino, we went to our hotel – a Comfort Suites that was incredibly comfy. The Larry Bird nostalgia began there with a display in the lobby. In it, a write up on how this hometown hero dropped out of school to become a garbage man. Thankfully he returned to College a year later. Oh, what could have been. Stay in school kids!


33 Brick Street – A Visiting French Lick Must Do

We headed out to see what French Lick had to offer on a cold weekday night in the middle of winter. I read about a bar full of Larry’s personal trophies and thought that was a good place to start. We got to 33 Brick Street to find an empty bar. Amongst the signed jerseys and photographs on the walls was a massive trophy case dividing two rooms. I had arrived.

READ MORE:    Where to Find the Kawhi Leonard Murals in Toronto

I smiled a giddy smile as we entered and was clearly noted by our waitress. Before she even took our drink orders she was draping Larry Bird’s 92 Olympic jacket over my shoulders, the very one he wore while receiving his gold medal alongside his friend and rival Magic Johnson. I was lost for words. 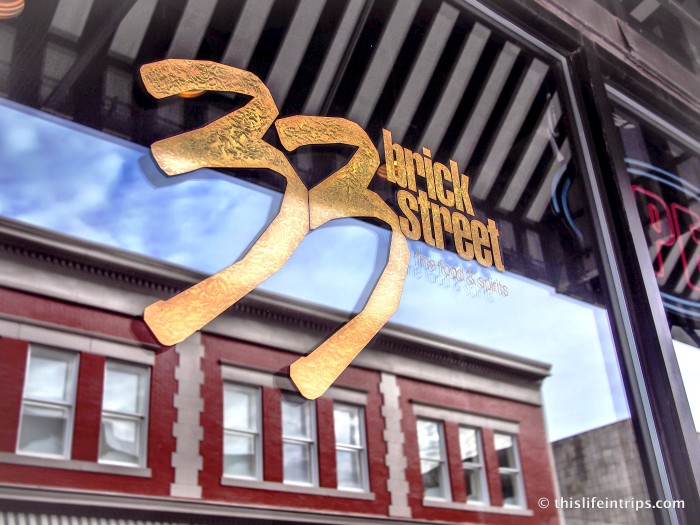 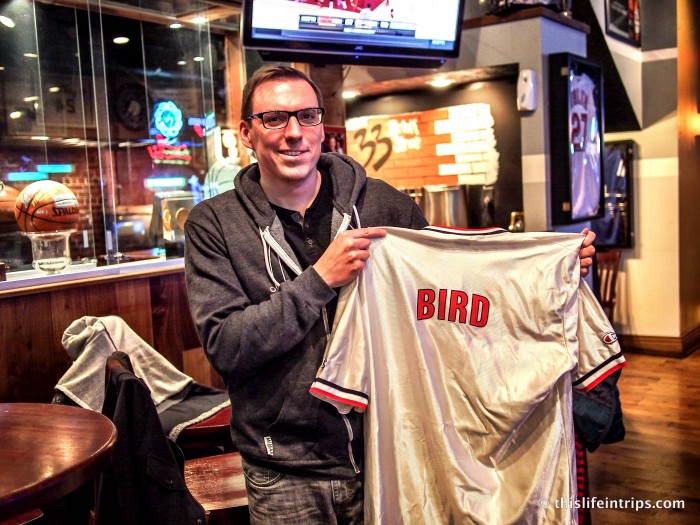 Instead of taking the jacket back a friendly cook emerged with keys to the trophy case. One by one he pulled out awards and trophies – the very ones Larry Bird received, held, and cherished. Wow. His rookie of the year trophy. The 85/86 NBA MVP trophy. His game-worn size 17 Converse sneakers.

It went on, all while I’m wearing this goddamn Olympic jacket. I assume everyone that walks through the door gets the jacket treatment as it is not behind glass casing, but the trophies? That was beyond special. The cook said that they could tell I was a fan and they like to share what Larry has shared with the bar. You see 33 Brick Street isn’t owned by Mr Bird. The only affiliation he has is being high school friends with the owners.

A good friend to have. 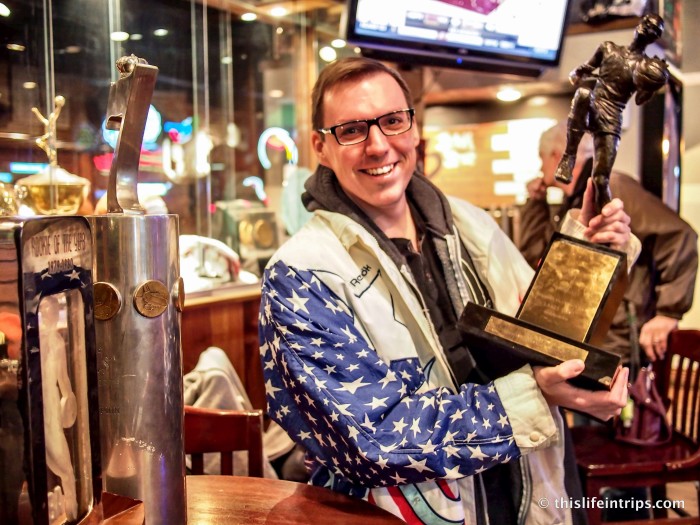 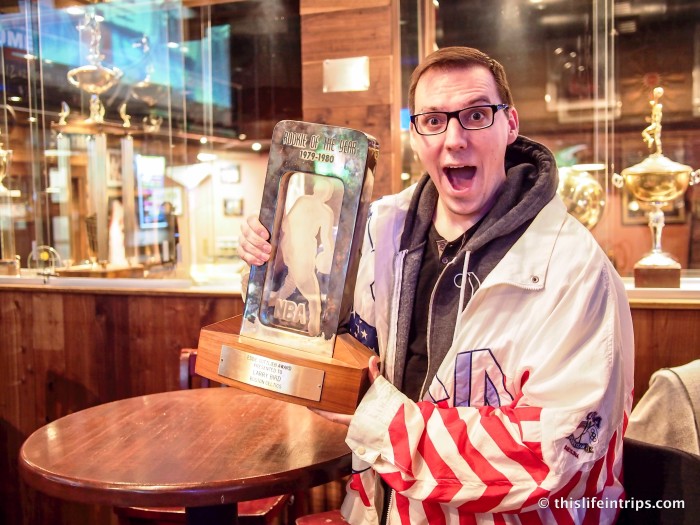 As for the bar itself, I couldn’t tell you how the food was or what do they have on tap. I was in a daze the whole time. The bar closed early so we thanked the staff and headed next door. That is when the gravity of what just happened sunk in. Visiting Franch Lick was more than successful from this stop alone. 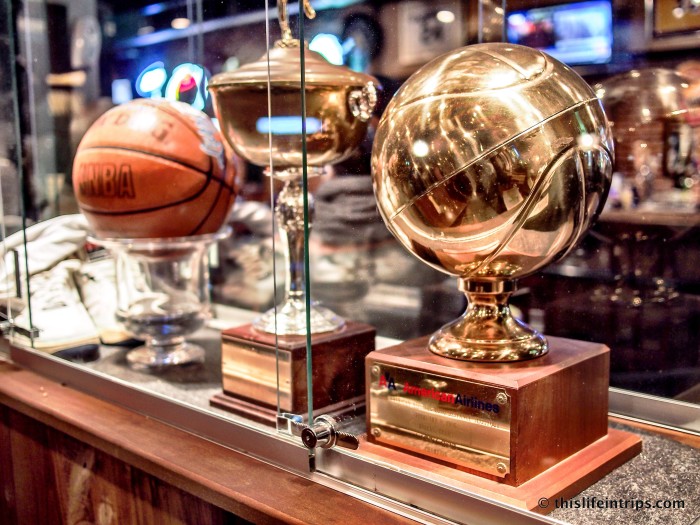 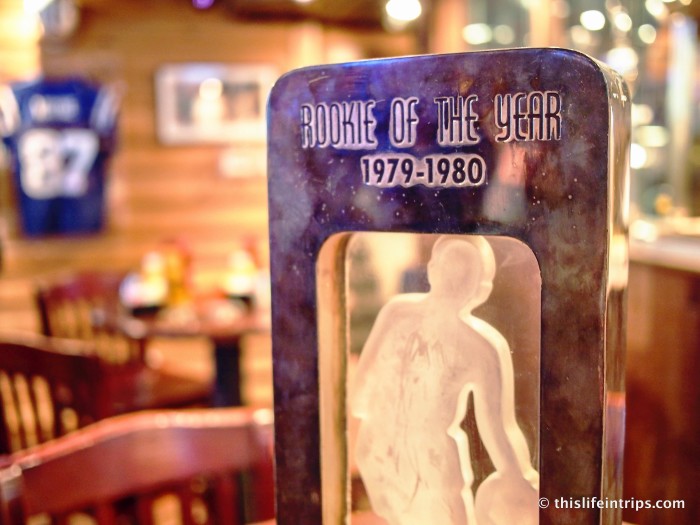 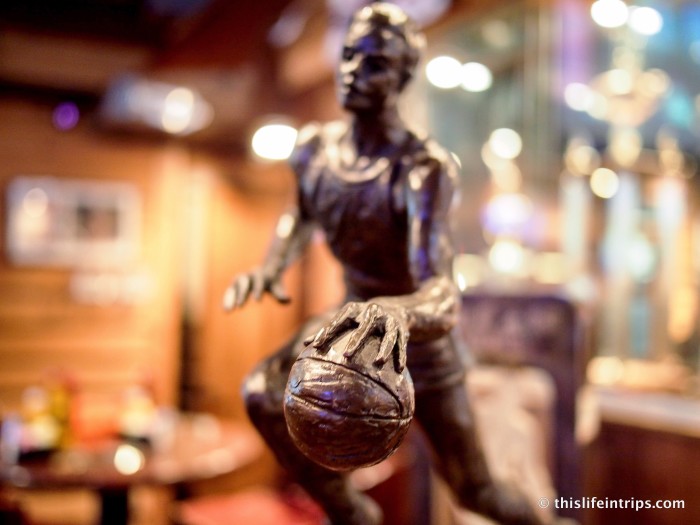 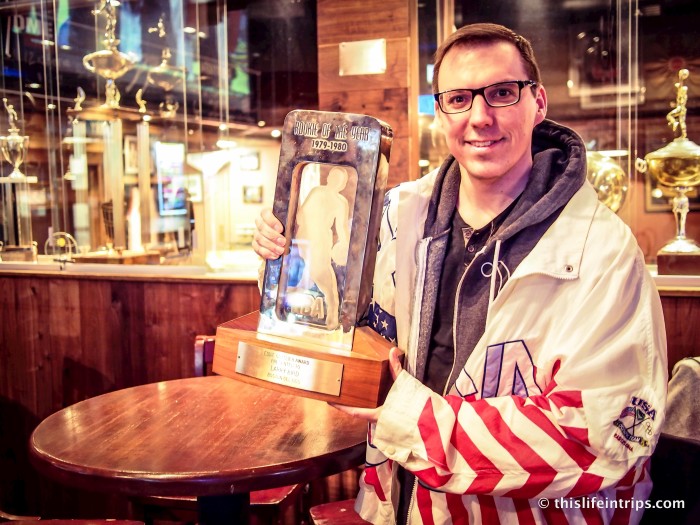 We drank cheap drinks in the smoke-filled small bar and chatted with locals about their town and their most famous resident. There was talk of Larry getting a big head and forgetting about his beloved French Lick but I paid no attention. I had a 10-year old’s expectations to maintain and was having none of it. We said our goodnights and asked the bartender to call us a cab (The only one in town) only to find that the driver decided to take the night off. Shit. There we were full up on cheap beer and boyhood adrenaline and no way home.

No worries. It’s friendly French Lick. The bouncer, who happens to be the friendly cook’s son gave us a ride home. What a country!

One of the reasons I wanted to go to French Lick was to see where this basketball icon that I idolized came from. I have seen many pictures of his home and the hoop in the driveway where he practised and had it in my mind that I had to see it in person. To say taking the one-hour-plus detour to see Larry Bird’s childhood home was a let down is a bit of an understatement.

I’m not sure what I was expecting really. I guess at the very least the hoop and backboard I had seen 100 times before on television and in magazine articles. It’s gone. All that remains is a worn-out section of the garage where it once hung. Why anyone would remove this iconic fixture is beyond me but then again, I am not the norm. I did, after all, drive out of my way to see a house that most people, French Lick locals included, don’t think twice about. 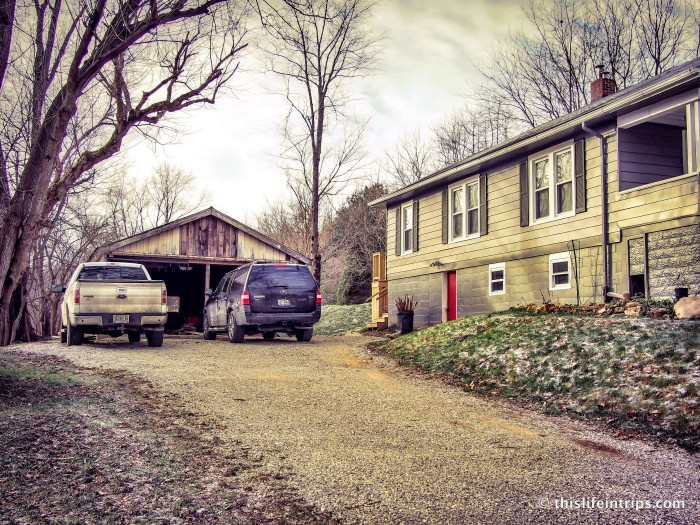 When asking our hotel hostess for directions all she gave me was the cross street. This was a surprise as a lady working the night shift let on that the very owner of the hotel we are staying at bought the home and was turning it into a museum of sorts. By the looks of the house, I’m not sure how credible that intel was. I guess I will just have to return to French lick to find out for myself. 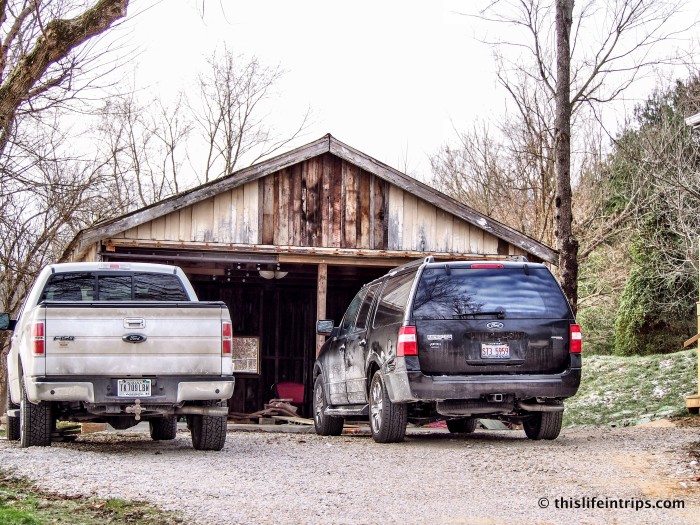 What I do know is seeing his childhood home renovated and not resembling much of what I had in my mind made that visit 33 Brick Street that much more special. I mean seriously, his 86 MVP trophy and me smiling ear to ear. That alone made visiting French Lick Indiana, that small town, worth the detour and then some.

A big thanks to reader Joseph Leon for passing along some updates and his experience staying in Larry’s former home! 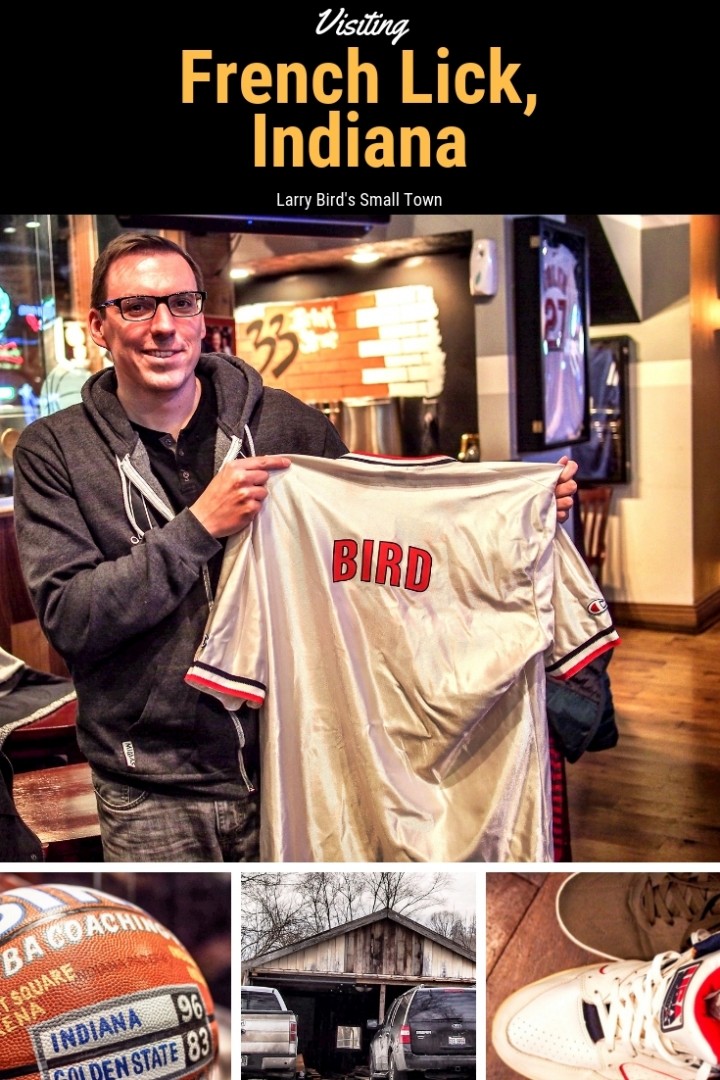