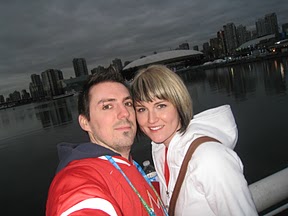 And what a week it was. We were able to get tickets to the Molson Hockey House for the opening ceremonies which was great. Next best to being at BC place and walking distance to home too.

As for the ceremonies I was pleasantly surprised. I was expecting a much more “Canadian” budgeted show and was happy to see they left out big international names like Celion and Nickleback. Thank Jebus. The other surprising thing about the show was how “Ra” Canada it was. It was very odd and very un-Canadian. I loved it. What brought that home for me and for most people was Yellowknife born Shane Koyczan and his poem “We are more” Shivers were present throughout the show and continued till the end. Steve Nash was a surprise in the cauldron lighting as was Gretzky on the back of a pickup truck. Now that was Canadian. 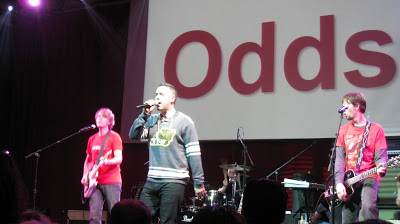 Once the outdoor light was lit Canadian acts including The Odds, Ed Robertson, and Collin Jams hit the stage inside the Molson tent.
A surprise show by Bryan Adams followed. An even bigger surprise was that my 2nd cousin was playing keys for him. It was a great show and was good to be able to chat with him.

The first event I went to was Russia’s beating on Latvia. High school friend and Olympian performer Aaron was in town and came out for the game. It was a great game and the atmosphere was awesome…and it wasn’t even a Canada game. Can’t wait for the USA game. 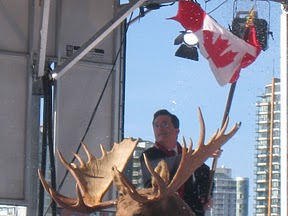 After a 12 hour night shift I stayed up just a little longer to take in a live taping of the Stephen Colbert Report. Although I was exhausted for the next couple days it was well worth it as the show was hilarious. For those that took his Canada bashing seriously I can tell you that he was very appreciative for Vancouver and the response he got. From one “Syrup sucker” to the next, Canadians were lovin it. To top things off he actually rode the stuffed moose after being egged on by the crowd and then waved the Canadian flag after chants of “Grab the flag!” went out. Watch the show on CTV or Comedy Network next week. Good chance I will be on there as the cameras panned the crowds constantly.

The onslaught of guests at l’Hotel Sherin (thanks Whit) continued as Erin’s friends from Oakville left and my brother checked in. Scott was here to take in a quick match of curling. Canada crushed Denmark in only 6 ends after some amazing shots by K-Mart and crew.

After curling we made our way downtown to catch Aaron’s Medal Celebration show at BC Place. We made it just in time. A great show and a great crowd. Congrats Aaron, representing NWT and making us proud. 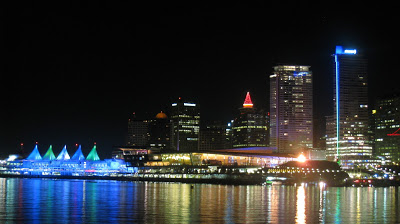 Vancouver Olympics Week one done. One to go. Here is hoping Canada can pull off a better second half to these games. A good start would be beating USA tomorrow in Hockey. Can’t wait.

As close to the flame as I could get!