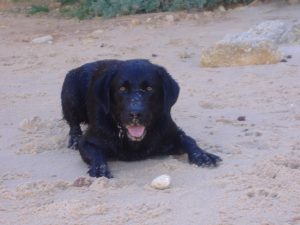 The Stray Dogs of Lagos – Shaun Makes a Friend

So after another late night in Lagos, Jon and I missed check out and are here for another day. Terrible. I got up at the crack of noon to go for a hike and make the most of another day here. It was gorgeous out. There is a trail here that goes along the cost from small beach to small beach. It was amazing. The most beautiful sights I have seen so far. At the second beach I met my black lab friend. The Stray Dogs of Lagos are awesome. There are so many cruising the streets and its not like they are wandering, they are on there way somewhere. There is one dog that hangs out at the bar we have been going to. This dog just chills on one of the couches with the music blasting. I was on the beach and saw this black lab come running down the 100 or so steps to the beach and into the water. Poor thing must have been dying from the heat. He then started digging frantically on the beach then brought a rock over to me. We played fetch for at least an hour. Reminded me of my brothers dog, “Trek”. I called this one “El Treko”. He would not stop and dove into the waves like a pro. The Stray Dogs of Lagos are also playful. 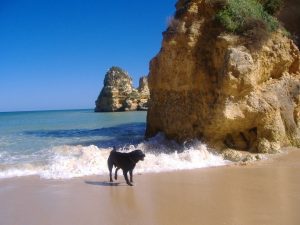 After I got tired from playing fetch I continued along the coast until I hit the point. I stayed there for a few hours. It was amazing. The coast has tons of huge holes that lead down to the ocean and carved out arc’s. My mom sent me an email wondering what Lagos was really like…here you go.

Off for some eats and beer. Sevile Spain tomorrow?