Ok so I had some what of a dull night in Cleveland and was determined to make up for it. I decided to get up early and make the most of my day. I went to the gym then headed out to wonder around downtown. As I left the hotel I noticed a flyer on a WWII submarine that you can tour. Sold. After getting some eats I made my way to the sub. This thing is cool and made my day. It was very interesting poking around a sub that fought in WWII. I got a good feel of what life would be like on a submarine, cramped and sweaty. 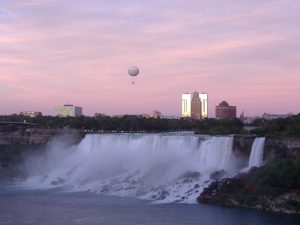 After checking out of my hotel I was on the road again. I decided to head to Niagara falls. As I left Cleveland I missed the turnpike and ended up on a road that follows the lake Erie shore line. Very slow going as you go through a bunch of small towns but very scenic and am glad I stumbled on it. Driving through one small town I passed a library and decided to stop in and check my email. It was such a random thing being in a small town in Pennsylvania. By the by, this road trip I passed through 4 states.

I got to the falls just in time for some great sunset pictures. After admiring the falls for a bit I fought my way through the hordes of family’s and couples to try and see what Niagara Falls had to offer other than the falls. Good God the pack a lot of crap in! So over the top. Somebody tell me what a wax statue of Britney Spears has to do with Niagara falls? A definite tourist trap. One thing I did indulged in was the Guinness book of records museum which was pretty cool. After that I made the short trip back to TO.

Off to Montreal for the weekend