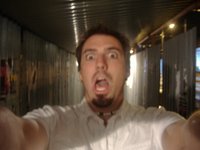 The good life in Slovakia

So if you haven’t seen or heard about “hostel,” the movie, I will fill you in. Personally I have not seen the film but my friend Mike scared the crap out of me telling me about it before I left. Basically it is about backpackers being lured to Bratislava with the promise of beautiful girls and good times. After being at this hostel for a couple days they are hunted for sport by twisted rich folk. Although these backpackers are brutally murdered, Mike assured me that the women were indeed gorgeous so I was willing to take my chances. 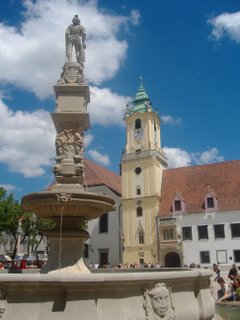 Chris and I arrived late afternoon and found our separate hostels. We met up later for food and drinks. We quickly found out that Bratislava is better represented by the movie “Euro Trip” where some backpackers accidentally wind up in Bratislava with only a couple dollars between them. In the movie it turned out to be more than enough for a five star hotel and to party like rock stars. That of course, is a bit exaggerated but Bratislava is definitely the cheapest place I have been to. The good life in Slovakia indeed. We ate and drank like kings…Damn ass kings. This restaurant, “1 Slovka” was amazing and so cheap.

After rolling out of there we went at watched some opening night of the world cup over some big ass beers. 3 liters and 3 bars later it was time for bed.

The next rough morning we toured the old town and found that there really isn’t that much to see there except drunk Brits in dresses. Apparently Bratislava is the Brits stag party destination of choice.We climbed the castle hill and got a good view of the city. Across the river painted a perfect picture of communist life at its best, Concrete block housing and endless smoke stacks. 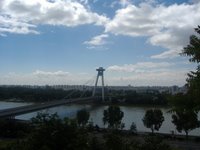 After strolling around a bit more we agreed that the best thing to do there was eat great food. So we ate…and when we were full we ate for sport. We even went back to the same restaurant as the night before. Peroges and goulash…so good.

Almost exploding, I said goodbye to Chris and the The good life in Slovakia and made my way to the airport. Sunny Dubrovnik, Croatia is up next.