Luckily for us Air Canada was having a seat sale so direct flights to San Fran were cheap cheap. Unluckily for us Air Canada had just introduced their gas surcharge which made the tickets not so cheap cheap. None the less we had concert tickets, hotel rooms and a craving for sourdough bread bowls. Because I didn’t want to burn much time off we left first thing Friday AM and returned Sunday night. One thing I didn’t account for was having to be at the airport 2 hours early as it was an international flight. This meant we were at the airport at 4 am to catch our 6 am flight. Add that to us drinking Californian wine until 1 AM and you’ve got some sleepy travelers.
Its a good thing excitement trumps exhaustion.

We arrived at our quaint little hotel just off of Powell and Union Square around 9:00 am. We dropped off our bags and headed to the wharf via the Powell and Market cable car. 20 minutes later we were eating chowder and drinking beer out of brown paper bags. Life is good.

After touring the piers for a couple hours we headed back to the hotel to see if our rooms were ready. Showering and a nap became a priority but unfortunately the rooms were not done up yet, or so the crack team at the front desk had told us. The girl was as helpful as the travel agent from the show Little Britain. “Computer says nooooo…”

They had Justin and Alison’s room ready so the 4 of us took a nap sleeping across the double bed. Cozy.

While the girls showered Justin and I headed out for a walk. We ended up at a Jack in the Box for some more breakfast. While eating a homeless guy tapped on the window and motioned as if to ask for money. Justin actioned like he didn’t understand and being the friendly Canuck he is, waved for the guy to come inside.

Homeless guy (sits next to Shaun): “Hey man, you got some money? Im starving.”
Justin: “How much money?”
Homeless guy: “Ummmmmm….like…$20.”
Shaun chokes on curly fries.
Justin(pulls a twonie out of his pocket): “All I gots is change. How’s this ?”
Homeless guy: yah that’s cool….wait. No that’s no good here.”
Justin: Sorry dude, I don’t have any American cash. We just got here.”

After making small talk about how cold Canada is the guy asked Justin if he had an ATM card and said he would kindly escort him to a bank machine.

Justin: “Im not going to give you money but if your hungry I will buy you a meal.”
Homeless guy(thinking hard on how to turn food into drugs): “Ummmmmmmmmmmm…..nah. That’s OK.” 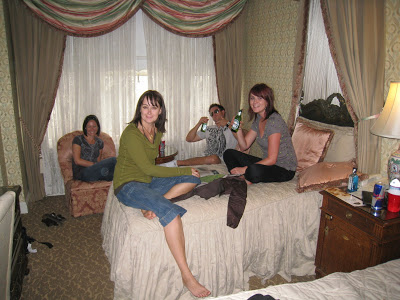 With that we left.

Back at the hotel our room was finally ready. I grabbed our bags from Justin’s room and shuffled them to Erin and mine and Inga’s room. I opened the door and Inga was sitting there. “How did you get in?” I questioned after saying hello. “There’s a real crack team working at the front desk!” Inga was the one who tipped me off on the concert so naturally she wanted in. The three of us decided on sharing a room even though the room consisted of 2 single beds. cozy.

So there the five of us were. Getting fueled up on Red Bull and vodka, listening to In Rainbows in our tiny hotel room, getting ready for one great night.