I was told that Croatia was a hidden gem, a treasure. I found out how beautiful and scenic it is as I took the bus from the airport to t 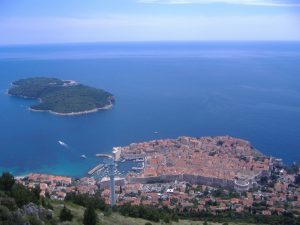 own at sunset. However getting off the bus in the old town I found that everyone and there dog has a treasure map. Dubrovnik has by far been the most touristy place I have been. It could be so busy because its getting into summer but when your expecting to be off the beaten path its a bit of a shock to have to fight your way through crowds.
It was also a lot more expensive that I thought.

I spent the first night in the old town which was nice but cost close to $40 Canadian. The next day I moved into the youth hostel which was a bout a 20 min walk from the old town but half the price. I spent the rest of the day at the beach and enjoying the scenery.

That night I went out with a group of Norwegians I met at the hostel. Before Croatia, the only Norwegians I had met were in Portugal and Norway. I didn’t think they backpacked but this hostel was full of them. Apparently they can be found on The Beaten Path. These guys were on there way to travel Serbian, Bosnia and Macedonia…places I would never think of traveling however I have met many people who have been through the area and have said its great. I think soon we will hear that those areas are a hidden treasure and will become the beaten path,

After a late night out on the town we arrived at the hostel well past curfew. this meant we had to scale a 12 foot wall and enter the hostel through a window. We met an Ausie that night who was also staying at the hostel. He is in the Australian army and was bragging a bit earlier in the night about all his deadl 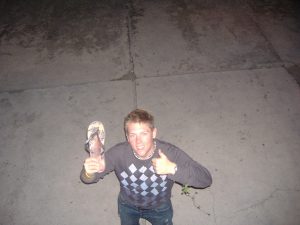 y tactics and abilities. When it came to climbing the wall he lost his thong and then fell down off the wall trying to retrieve it. The Norwegians and I had a good laugh and bugged him that if Australia ever invaded our countries we would just have to build 12 foot walls.

The next day I hiked the hill over looking the town and got a great view. As I reached the top it started raining so I took shelter in a completely destroyed gondola/cable car building. This is a great reminder of the 91-95 conflict. There is also a fort that has been shelled heavily…very eerie to see.

After descending the hill I was going to go tour the large city wall that surrounds the old town but ended up napping instead. Another night out with the Norwegians then it was up for an early bus to Split.

After a four and a half hour scenic bus ride that took me through Serbia and up the Dalmation coast, I arrived in Split. I was supposed to meet up with Ed and Lucy, a fun Aussie couple I met in Krakow, on the island of Brac. Instead I was pleasantly surprised to see Ed as I got off the bus…always nice to have a personal greeter! He had booked us a nights accommodation so that was cool. After getting settled we toured the town then hit an outdoor bar for the Croatia/Brazil football game. 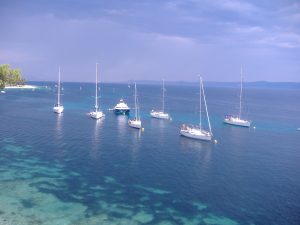 The next morning we got u pa little late and had to run to catch our ferry. 2 hours later we arrived in Bol on Brac island. Bol is a very sleepy resort town with a unique pebble beach peninsula…say that 10 times fast. Anyway, after getting into a very nice (and very cheap) apartment, we were off to the beach. The water is so clear and blue, absolutely amazing. One very nice thing about the area is that there is no jet skis and very few power boats., just sail boats, windsurfers and very entertaining kite boarders. It makes for a very peaceful and relaxing place.

After a second day at the beach we met up with some girls from Montreal for dinner. A night of Croatia beer and guitar playing then it was off to bed. I decided to take the fast ferry to Split where I was to meet up with Jon. The catermeran trip was very fast and comfortable but was at 630 am…made for a long day.

At the port I met up with Jon. We decided to head up the coast towards Ljubljana Slovenia, or Venice Italy. We caught a bus to Zader where w 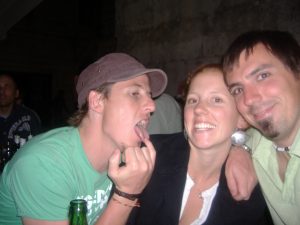 e stayed long enough to walk through the old town and listen to the Sea Organ, which is a series of 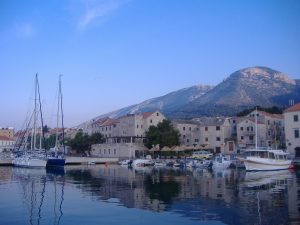 pipes 70 meters under water. the rushing sea water causes the pipes to play notes at random. It was very cool to hear, sounded like a bunch of sick whales.

After that we were off to Rjeka where we thought we could catch a ferry to Venice. We found out that’s not possible and decided to stay the night and bus it in the morning. Not much to see in Rjeka. We met some Portuguese     girls and went for a late dinner before getting the best nights sleep I have had in a long time.

Romantic Venice in the Morning.