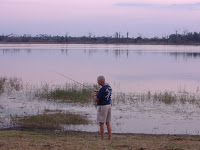 I arrived in Orlando relaxed and well feed. I had just flown the most comfortable flight of my life. First class is the way to go. 5 min. later I met up with Erin’s folks John and Dani whom are wonderful people…and they laugh at my jokes. Erin, her brother-in-law Tim and sister Amanda arrived shortly after I did. From there we were off to Saddlebag Lake (I laugh every time I think of the name) retirement community where Erin’s parents were spending a rough 3 months. 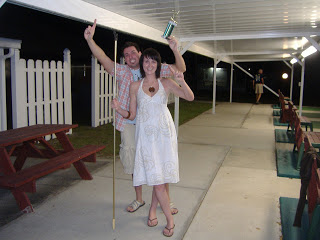 We spent a rough couple days there relaxing pool side, enjoying the local birds, drinking in the sun, eating great food, playing games and my favorite, playing shuffle board. It’s not a retirement without it.
We spent the following day surviving Universal Studios which I was very excited for as I liked it better than Disney as a kid. Sadly it should have stayed that way as some things are better left to the imagination. E.T. for example now seems like a freaky acid trip. I did however get E.T. to call me Leslie as we left so not all was lost. Other let downs included Back to the Future, Earthquake, and Jaws (although Jaws is still worth a short lineup) 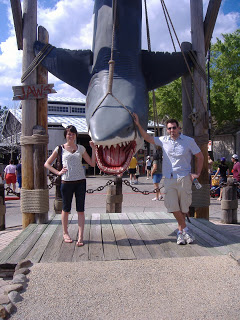 We finished up with the Mummy which was awesome. At one point the ceiling was on fire which was unexpected to say the least.

When we were done ruining our youth on rides we once enjoyed we had little time to try out the new-to-us Islands of Adventure. We rushed over to find the scariest roller coaster I can honestly say I have ever been on, The Hulk. This green bad boy shoots you up at 60mph and sends you on a Topsy-turvy ride unlike anything I had ever seen. It was a hot day but the sun was starting to set so I suggested we hit the water rides before it got cold (but more so because I did not want to get on this roller coaster) Erin’s sister didn’t want to get wet so I reluctantly got in line. Now I have done my fair share of coasters in the past year and now enjoy them (for those of you following along, I became a man last September) but for some reason I did not want to get on this ride. This made me nervous. I was quite in the line. I was quite getting in the ride. I was quite when the ride jerked to a stop at a 60 degree incline. I was even quite for the 15 minutes we waited at this spot while my mind raced “Why aren’t we moving? What’s wrong with the ride?? What happened to the car in front of us???” Erin nervously joked with the other stranded passengers. Yes sir, I can honestly say it was the scariest roller coaster I had ever been on and it barley left the platform. Surviving Universal Studios indeed. 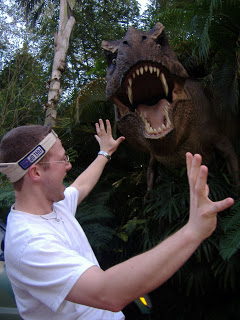 After dismounting the stranded car we preceded to the Jurassic Park water ride.
Amanda apologized repeatedly as if the stuck ride was her fault.

We finished off the night with a ride similar to Top Gun at Canada’s wonderland except by this time it was dark. It was an odd feeling with all the loops and turns, you could not differentiate with what was up and down. 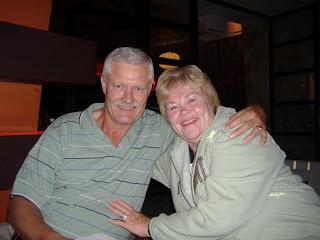 We stumbled our way to City Walk, the pub/club part of Universal. There we met up with John and Dani for some drinks and eats.

Off to Disney tomorrow.