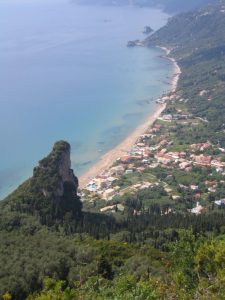 It was definitely an interesting week. Pink Ouzo to go with Pink Togas…a birthday I wont soon forget. Mountain top Quading followed by roll overs and broken bones (don’t worry mom, not mine or Jons). Late night improve jamming with the best Johny be Good I have ever heard…by a Brit, and strep throat and plenty on sun. This week had it all.

Surviving the Pink Palace – Don’t Drive Your Quad off a Cliff.

I will start with some pics taken on a quading trip we did. This was a lot of fun and very scenic as we drove up a few mountains on the island. It was also action packed as 2 of the girls almost killed each other…twice! I was lucky enough to be behind them when one of the girls slammed into the back of the other. This was followed by me spinning out and crashing into a wall to avoid them. Another girl almost drove of a cliff. You think that would scare somebody from quading. Not these girls. They rented them on there own the next day and one girl succeeded in driving of a cliff. From the sounds of it, she is very lucky she only broke her wrist and got some scratches. See pic below.

My Birthday was a blast. The toga party was a lot of fun. There was Greek dancing, Ouzo shots (followed by a plate smashed on your head) and of course, plenty of cute girls dressed in pink togas. Almost worth the illness that followed for 4 days. Surviving the Pink Palace?

Happy Birthday to me.

Big Ben from Kent. Here I think he is playing Johnny be good. So funny. 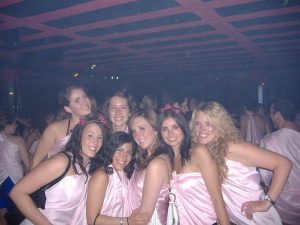 We ended the week hanging out with some very cool (and very cute) girls from Edmonton. Here is a picture of them the night we left…which happened to be another toga party. Would have liked to stay for that.

Anyway, in Athens now after a long night bus. Here for a few days. Meeting up with Jons parents and then I am off to Sweden and Norway for a week or so. Looking forward to that.