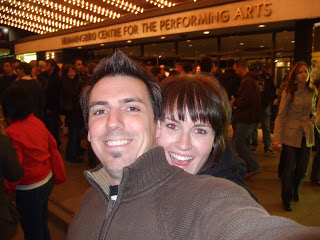 I’ve said it before and I will say it again, Westjet is great. For the complete duration of my flight to Toronto I watched the Canucks/Stars game 7 in comfort. Great way to kill a 3 hour flight. 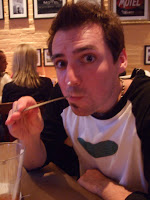 As a part of my birthday gift, Erin got us great tickets for a favorite band of mine, Modest Mouse. I had yet to see them live and was very excited. The show turned out great even though it was at an odd venue. I only say odd as this band has been playing small clubs and bars for the duration of their long career. Now they were playing at the Humming Bird, a performing arts center that normally houses plays and musicals. The bands stage setup was cool as their 2 drummers were on raised platforms. Cort told me that the reason for the 2 drummers is that the original drummer went crazy and while in rehab, the band replaced him. Now that he is sane again he has rejoined the band. Interesting tid bit nes pas? 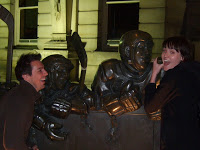 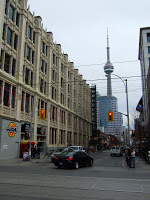 After the show we had a late dinner complete with birthday cake. We stumbled past the hockey hall of fame and down the Canadian walk of fame before heading home.

We spent the next day strolling the shops on Queens street and having lunch at a nice crepe cafe. That night I was off again, this time to Las Vegas.