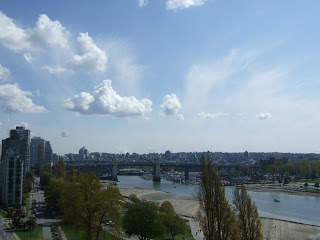 When ever I complain about my job I really need to remember the perks. One being the time off I have still been able to enjoy and the other is the company plane. I was able to take advantage of it last weekend as it was heading to Vancouver with room to spare. It is truly the way to fly. For starters it is based at the municipal airport which is not only next to my office but a 5 min drive from my home opposed to 45 min to the international. Plenty of free parking to boot and you don’t have to show up an hour early to get an o-so-close to a strip search.

Yes the perks are good.

I arrived in Vancouver Friday morning and headed to my former roommate/bandmate’s apartment where I would crash on his surprisingly comfortable pull out couch for the next couple nights. Cort’s apartment is small and pricey but the view over Granville Island, the Pacific and the Rockies is amazing. 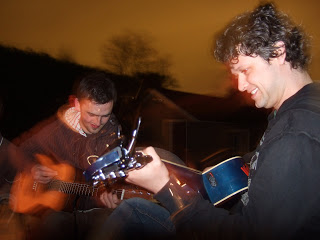 Cort had worked all night so I headed out for a stroll. I made my way through the “gaybourghood” towards BC place. My only decision to make was which Starbucks to stop at. That one? or that one? or what about the one down the street? I finally settled for one on Robson street which is, not surprisingly, kitty corner from another Starbucks.

Once I had finished my coffee and had enough sun I decided to check out some shops. Since my birthday was coming up and I was going to be heading to Vegas I thought I would indulge. Now I hate shopping for clothes because the minute you look at yourself in one of the stores many mirrors you realize how much of a scrub you look like in your current duds. Then you hold up the $70 shirt and $200 sports coat that you only agreed to try so the sales lady didn’t ask you to leave and think “I can not afford this.” The shirt stares at you as if to say “Look at yourself, you are disgusting. You call those clothes?” The sports coat agrees. “You look terrible. Buy me you pansy.” I walked out $200 poorer and the worst part is that I could wear that very same new shirt and coat the next day and walk into another store, look in their mirror and think the same thing. It’s just fantastic marketing…or it’s just me. 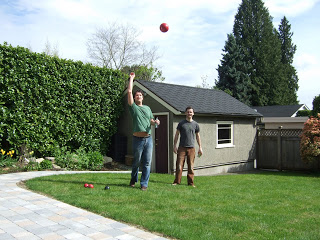 After escaping the gauntlet of overpriced shops on Robson I headed back to Cort’s apartment. We headed out for some great fresh sushi and then strolled over to the Vancouver art gallery where there was a huge “4-20″ rally. I had sadly left my camera at the apartment which is a shame as words can not describe the thousands of people that gathered in the grounds to light up. I would like to say that it was a huge mix of people socializing, you know, doctors and junkies, drop outs and lawyers, hobo’s and firemen, but it was all burnt out hippies which is weird cause I didn’t think there were any in B.C. I truly felt like grabbing the MC’s mic and yelling ” Get a job you bums” but wisely declined. Although we didn’t participate in the festivities it was pretty hard not to get a buzz. The place was one huge cloud of smoke. Once we got our fill of the freak show we hit a patio for some drinks in the sun then grabbed a case and played guitar for hours. My fingers still hurt. 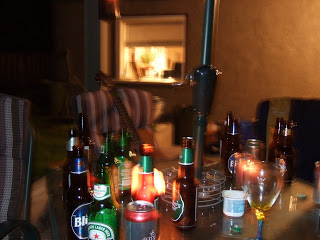 The next day was pretty lazy. We went to a BBQ at a friend of Cort’s in west Van where I found out that I am quite the lawn baller. More guitar, a 70’s drinking game called “Booze it” and a one sided game of cranium and it was suddenly 4:00 am. A few hours later I was back on the comfortable plane and heading home. Yes sir, a great way to travel.

It was a great start to my birthday week. Off to Toronto tonight, stay tuned.