I headed up to Yellowknife last weekend to surprise ma for mothers day and go ice fishing with my brother. Take notes ladies, not only am I a good son but a good brother as well.

I arrived early Friday morn, met up with Scott and headed out to get supplies and gas for his plane. Now I have bugged Scott for sometime about his plane, or what I have dubbed a “Shoe box with wings” but this little thing is really cool and is a lot of fun. The first time I went up with him I was expecting to be walking faster than the plane could go but within seconds we were off the ground and heading straight up. So much fun.

Because all the snow melted Scott took the skies off his plane and put wheels on. (Skies don’t stop on ice) When we arrived at the plane parked next to Scott’s houseboat we found one of the tires was flat. Scott went and got an air compressor while I relaxed in the sun, floating on a small dock. This was especially cool as I was floating in the only open water around his houseboat. It’s not everyday you can enjoy something like that. 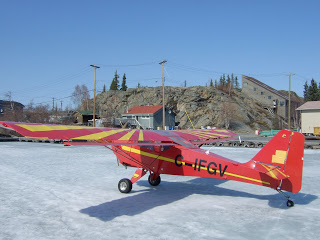 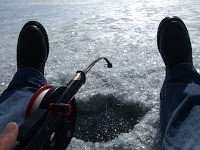 Scott returned, filled the tire and then we were off to fill up the plane at my father’s place. We could have taxied there in the plane but as the ice was rough and more so because we could, we flew the one-minute flight.

Scott dropped me off on a small lake 30 miles or so north of Yellowknife then left to pick up another passenger. Although you couldn’t have asked for a better day, I was glad I had a great windbreaker on for the breeze off the ice. I digress, but if you are interested here are a few of my favorites!

Anyway, the sun was shining and the fish were biting. I was lying on the ice reading a book when Scott returned. I tell people how the fishing is great in the north but this was unreal. I was standing over the hole watching pickerel take my bait. I had to quit when one large pickerel got off my hook and I reached in the hole and pulled it out. Seriously, how do you top that? 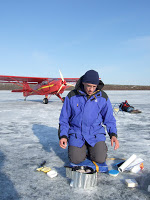 Scott fried up some pickerel right there on the ice with the help of a small kerosene stove. It was alright..I mean it was pretty fresh I guess. We sat and b-s’d awhile and then Scott said one of the coolest things I have heard in sometime. “ You know, if I die and get reincarnated, I hope I come back as me.” Well said. I may steal that quote.

We flew off full and satisfied with the day.

I had still not told my mom I was in town so we tried to get her to meet us for drinks later that night. I had forgotten that she was busy with high school grad ceremonies all weekend. I figured I would get up early and show up at her place with coffee. On the way home we noted the ice was a little more fragile than it was earlier that day. Foreshadowing perhaps?

The next morning Scott left very early for work. It was raining out so I opted to head out later. I finally got going around 2:00 and headed over the ice the same way we had walked the night prior. The ice was creaky and noticeably missing in some spots due to the rain and high winds. I thought to myself “this is stupid” I could have taken a canoe but where would I leave it? As I walked to the govt. dock I noticed 2 golden retrievers playing on the ice. This made me nervous as they were breaking through as the went closer to shore. Where is there owner?? Because of this I decided to get off the ice at the first chance. At the govt docks there were planks leading from the shore to the thicker ice. As I crossed the final plank the ice gave way and I went in. I don’t really remember being in the water. Before I knew what happened I was on the dock soaking and freezing. I then had to make the walk of shame to my fathers place around the corner. When I got there I saw the 2 same dogs playing in the bay in front of his place. Now I wanted them to fall in. My dad was out of town so I knocked on the door and surprised his house sitter. I spent the next 2 hours drying my cloths and having tea with Claudia. She is a very friendly lady, and being that she is from Newfoundland, gave us lots to chat about. 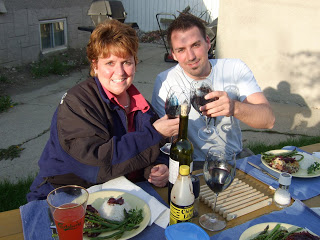 Sadly no pictures were taken as my camera was also drying out.

I finally showed up at my moms place wearing my dad’s clothes. I think she was surprised and happy to see me. Then I made her do my laundry. Happy mothers day.

My mom was busy that night which was ok. We were booked on the same 7:00 am flight to Edmonton where we were to really celebrate mother’s day. I headed out with some friends that were also in town for the grad and ended up getting less than 2 hours sleep before getting on the plane home. Why do I punish myself?

The next day was fun. Had coffee with ma and discussed future plans then I cooked a gourmet meal.

I got lots of good video flying with Scott and will post soon.