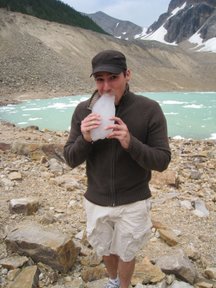 Erin’s sister and brother-in-law have it good. They are both school teachers and therefore on top of having Christmas, Spring break, family day, and for all I know, Yom Kipper, off they have over 2 months in the summer to do what they want. I am envious of their freedom, almost enough to make me consider a career change. Is it possible to be a high school teacher and have nothing to do with high school kids?

Anyway, what they wanted to do more than anything else this summer was to drive across the country to visit yours truly. A great choice and time well spent if you ask me. I would have driven 3 times the distance but I’m a bit bias…or modest depending who you ask. Actually they had planned to come visit Erin and camp through out the way, meeting us in Jasper. So with their schnauzer Joey and new tent trailer in tow they headed from southern Ontario through the northern states and up to Jasper seeing a ton of great stuff on the way. 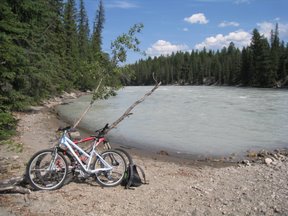 We met them at a nice little campsite just outside of Jasper. We spent the first day biking along the Athabasca river while Amanda and Tim tended to a trailer problem encountered between Banff and Jasper. Our campsite was perched on the Athabasca river and had trails running along it. Beautiful non?

Later that day we went for a hike up Edith cavel which holds Angel glacier. The weather turned on us half way up which made things a little more interesting. At the base of the glacier there is a cave carved out. We didn’t venture to far in as the rain was melting pieces of it and they were breaking off. At the mouth of the cave it was at least 10 degrees cooler. Very refreshing. 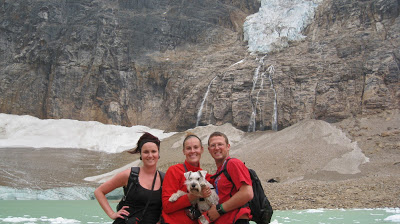 By the time we got back to the Jeep the weather cleared (of course) so we were able to enjoy the night by campfire. That’s when I met the one thing I felt I had been missing out on my whole camping life:

“Whats that?” I asked not sounding far off from a curious 5 year old.

“Why this? This is a pie iron.” Tim replied.

“Pie-I-roons?” I said slowly. “What do you put in this contraption?” 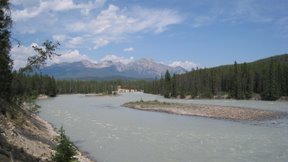 “Why anything you want. Tonight we are making pizza pie iron.”

It was and it is. This simple invention is basically a sandwich machine for a fire. Now hold up on taking your Ronco sandwich makers from your bachelor days out and tossing it in the ol’ fire pit, there is a little more to it than that. Well actually less. All they are are two iron clamps that you throw your ingredients in, close them together and cook. Fantastic. You can throw anything in it and it would come out golden brown and crispy. 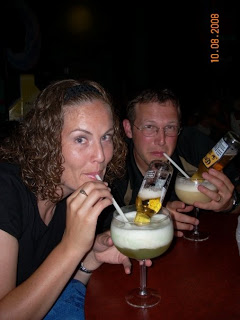 The next day we slowly made our way back to the city where Amanda and Tim would hang out for a couple days. A short night on Whyte sipping bulldogs was followed by an afternoon in the backyard. Intense bochee ball may have occurred.

That evening we brought the two of them to volleyball as ringers. Tim and Amanda play competitively back home so they were a much welcomed boost to our sad, sad team.

We squeezed one more night of pie irons in before they headed home. Time went out and bought me my very own pie iron set (probably cause I wouldn’t shut up about it). This time we filled them with pie filling and, wait for it….marshmallows. Madness.