“[email protected]$#ing touristsssssss” An extremely skinny, extremely gay and extremely ornery little man(?) lisped as he floated by. I felt like stopping, pulling out my camera and shouting “I see one! I see one!” while snapping pictures of the disgruntled local but alas I resisted and continued up the ever steep Powell street towards our hostel. Erin and I had just gotten off B.A.R.T (Bay Area Rail Transit) and were lugging our luggage up the busy street and awkwardly bumping into others. We arrived at our hostel exhausted and out of breath from our late night in Vegas and our early morning hike up Powell street. The hostel was OK but I have definitely stayed in much better. It was a far cry form the 5 star luxurious accommodation’s on the Vegas strip not but 4 hours prior. Never-the- less, we dropped of our bags and headed out to see the beautiful city that is San Fransisco. 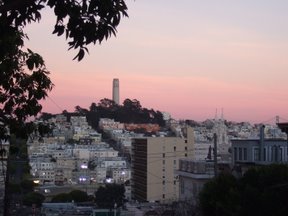 We made our way back down Powell street and past Union square. We didn’t get much farther past that as the area is littered with great shops. Erin had arrived. We spent awhile browsing shops before lining up to take a cable car ride to Fisher Man’s wharf. The street cars are clearly for tourists but are a blast. They quickly became our favored mode of transportation to the waterfront. We clung to the sides and cruised up the steep streets of San Fransisco. At each break on each hill we were presented with scenic and picturesque views. First of the downtown financial distract, next Coit Tower, Alcatraz and the wharf. We hopped off at the top of the crookedest street in America. This windy windy windy road is a neat site, especially as cars slowly drive down. We walked down it and got some great pictures of the city as the sun started to set. 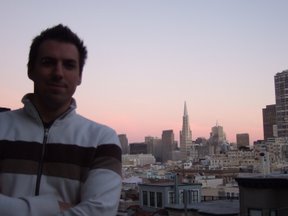 From there we headed down to the wharf which was coming alive with the night. Fish market style stands offered various seafood dishes as well as crab that you could eat right then and there. I opted for the seafood chowder in a sourdough bread bowl. It was delicious. 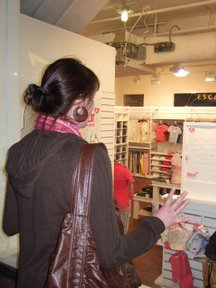 After our light dinner we strolled along the wharf and, surprise surprise, ended up at a bar. A few dirty martini’s later we made our way back to the hostel but not before some more shopping (window and inside) by Erin.

Alcatraz with the Fiddler’s tomorrow.