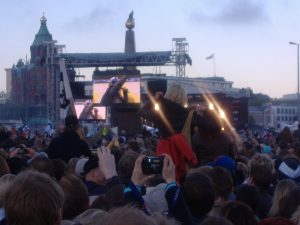 Rocking out in Helsinki

After my delay at the airport I met up with Raisa, my Finish tour guide. It was really cool hanging out with a local as I got to go off the tourist path. I saw a lot of really cool bars and bands that I would not have seen on my own. Music seems to be huge in Scandinavia and in Europe in general. There is a band contest every year called Eurovision which, as I found out, is a very big deal. Countries hold contest and then send the winner to Eurovision. This year a Finish band called “Lordi” won. This band is basically “Kiss” of this generation complete with costumes, makeup, cheesy rock songs, pyrotechnics, and even religious protestors. Never the less, they were voted best band in Europe. To celebrate, Helsinki threw a free concert where over 100,000 people showed up. Here’s the really cool thing, among the pierced and punked teenagers were parents, grand parents, and even great grandparents. No way would that ever happen in Canada. The support fo musicians and music is amazing, even the local radio was the most interesting I have heard…Ever. Rocking out in Helsinki continues.

Of all the bands I saw while in Finland, my favorite was a group called “The Don Johnson Big Band” They are such a cool mix and also boast the best Finish violin player. This guy played ripping guitar solo’s on his 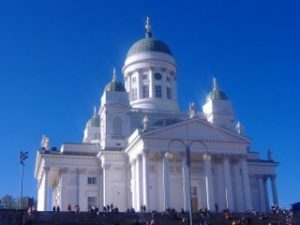 violin. It was jaw dropping good. We saw this band at a culture festival similar to Heritage days in Edmonton..Or at least I think. I have never been to Heritage days..Or any other city festival that Edmonton puts on. I’m writing this as a reminder to myself for the things I take for granted. Edmonton festivals have officially made the list.

Anyway, I did see some sights while in Helsinki…and by some I mean two. Sumoenlinna Island, which is covered by an 18th century Swedish fortress, and this white church.

I spent half a day bouncing between embassies and travel agents trying to throw together a St.Petersburg trip. Mixed info, a city holiday and the weekend held me up and lead me to giving up. It would have been time consuming and costly to go. I was very disappointed as I wanted to go. I decided to go to Poland instead so I am trying to figure out a route. I am heading south to meet up with Jon in Croatia after that.