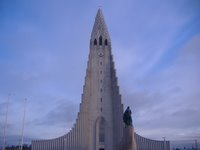 Ok, so we haven’t done a whole lot over the last couple days but we have had a whole lot of fun. My brother can agree with that…but not now as he is still asleep. Rookies…

Fueled by my daily hot beef injection, we toured Reykjavik by Daylight. Its important to note here what that means, I have had a hot dog everyday since being here, manly cause they are the only cheap eats but they are really, really tasty. Iceland and hotdogs, go figure. 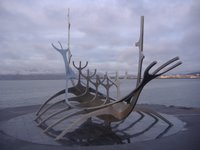 The city is very nice and clean with lots of modern buildings. We made our way downtown passing by the house that Ronald Regan and Gorbachev met and eventually ended the cold war. We walked the main street which is lined with a lot of cool stores then strolled by city hall which is on this pond that has the largest ducks I have ever seen. Next up on our Reykjavik by daylight tour was a very cool church with a statue of Leif Erickson out front then the waterfront where there is an interesting piece that looks like a Viking ship.

After that we had diner at a seafood restaurant that was recommended by a friend of my brothers. We split a huge bowl of mixed shellfish and it was great. You would think I would have had my fill of seafood in Nova Scotia. Not so.

It may not have sounded like much but we did pack a lot into a short day. We reserved a car for tomorrow so we can actually get out and see more of Iceland and Reykjavik by daylight.