Relaxing In Budapest – I awoke at 9:00 feeling very refreshed and ready 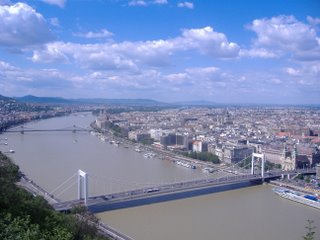 to take in Budapest. It was the first night train I actually slept on…might have been the Polish vodka…never the less I felt great. Then we found out that during the night our train was rerouted because of flooding and was 4 hours behind schedule. All in all I spent 15 hours or so in that bed. When we finely arrived I convinced Ken and Uy (from Australia) to check out the hostel I was going to. I had checked on line the day before and it was rated the highest plus had rooms available. When we arrived we found out they were full but the girl working said she would arrange something. She was very sweet and meant well, but it tool the rest of the day to arrange us to sleep on the couches. After all of that she asked if one of us would move to there other hostel across the road. This turned out OK. Not only was the hostel significantly better, I met up with Steph and Erin, the girls we drank with on the train. 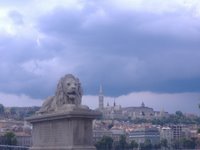 I gave up and listened in online while a coworker from home gave me commentary via messenger. The radio was lagging so I nervously waited to hear what Rick was typing about. Roloson, the goalie, injured and out of the playoffs. It was a good run. 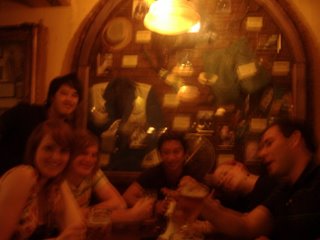 After getting about 5 hours of sleep I decided against joining the others on a bike tour. I spent a lazy day eating cheap sandwiches and watching movies. I watched “The Pianist” which was very good, especially after visiting the Jewish ghetto in Krakow.

That night I got into the imitation Red bull and we all went out for a good night.

The next day I toured Pest, the west side of the city. It is surprisingly a very beautiful city. We found a street with very trendy shops and cafes. Feeling like we accomplished something, we spent the rest of the afternoon relaxing over a bottle of Hungarian wine.

That night was game 2 of the finals. I found out that the original hostel I was at had it on basic cable so Erin and I headed over and watched. It was a painful 5-0 loss for the oil. 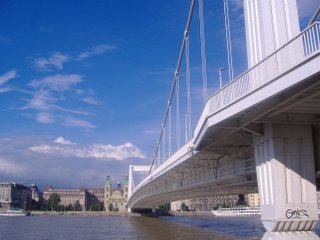 The next day I was determined to hit up the world famous thermal baths. Feeling like I hadn’t earned that kind of luxury or earned my relaxing in Budapest time, I hiked a hill on the Buda side with Erin and Steph. It turned out to be an easy hike and when we got to the top we found some nice parks where we spent the rest of the day lying in the grass and enjoying the first real warm day in sometime.

Feeling like I would miss out not going to the baths, I decided to stay another day and go see “Alice in Chains” as well. The concert turned out to be cancelled. I guess they realized that Layne Staley, the lead singer, has been dead for 4 years.

I got up early the next morn and went to the thermal baths. I am so glad I went as it was very cool…and hot…but not because of all the blue hairs and speedos. Chris, an American guy who told me about the “Alice in Chains” concert, came with me. He had been twice already but didn’t realize that outside of the small pools in the building lies 3 huge outdoor pools complete with fountains, massaging jets, and a ridiculously fun whirlpool kind of track. I could have, and did, spend hours spinning in that thing. 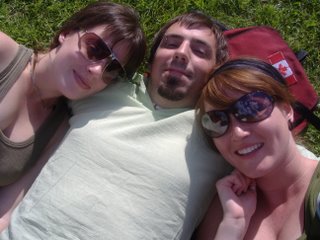 After getting nice and wrinkly, it was off for some true Hungarian food then to the train station. I found a cheap flight from Bratislava Slovakia to Dubrovnik, Croatia where I am to meet up with Jon. Chris was heading to Brat/slave as well so that was cool.

Has anyone seen the movie “hostel?” Wish us luck!!!