The 90’s are Alive in Portland

As said in the TV show Portlandia “it’s where young people go to retire”. For years I have wanted to visit this magical place to see for myself just how cool it is. Why
so magical you say? How about Bacon donuts? Portland. Striperokee? Portland. Bars with swings? Portland. More bikes than cars? Portland. Gluten-free options? Portland. Microbrew? Portland. Seattle minus the tourist stuff. Portland. No sales tax? Portland. Hipster chic? Portland. Food trucks? Portland.

If these options appeal to you. Go to Portland.

Like any other trip south of the boarder it began and ended in excess. Buffet diner at an Indian casino on the way down? America. Giant truck stop breakfast where the waitress calls you “hun”? Awesome. The theme pretty much continued through the weekend. Erin, myself, and another couple (Jen and Brady) arrived early Saturday afternoon to beautiful weather. We headed out to the weekend market where we took in the wierd and wonderful. Sadly there was no art with birds on it. We began to realize how great of a place Portland is while having drinks and watching this guy “preform.” 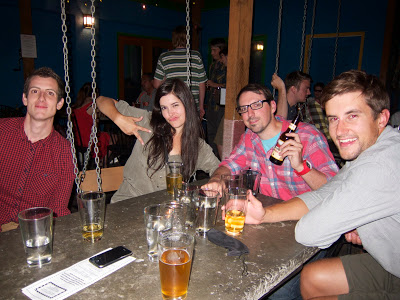 That awesomness continued into the coolest bar I have ever been to. After meeting up with Brady’s Texan friend Clint, we headed to a Glen Whytt approved place called East Burn. Not only does East Burn have great food, gluten free beer, and awesome service but an amazing patio with fireplaces and swing seats. What?!? Lobster Mac n’ cheese? Amazing. Lobster Mac n’ cheese on a swing? Portland Amazing. On top of that (below that really) they have a second pub with buck hunter, 4 player Pac-Man and skee ball. We had arrived. On the patio table next to us we chattted up a group that was celebrating a “birthday power hour” This wonderful birthday gift is a free hour of booze for the birthday boy or girl and 9 of their closest. Eastburn, we will be back and we will be festive.

After a great meal and then breaking the skee ball machine with a Canadian quarter, (nod to Jen) we headed for more excess and had after bar eats at Voodoo doughnuts. This incredibly popular and kitchy Portland staple serves up uniquely topped pastries with interesting names like the Gay bar – “Raised yeast doughnut chocked full of luscious cream and all the colors of the rainbow!” and the Voodoo doll – “Raised yeast doughnut filled with raspberry jelly topped with chocolate frosting and a pretzel stake!” Possibly being drawn in by my Canadianness and simple love for all that is bacon I gravitated to the Bacon mapple bar. It is exactly what it sounds like…only better. Gluten be damned, this was happening. 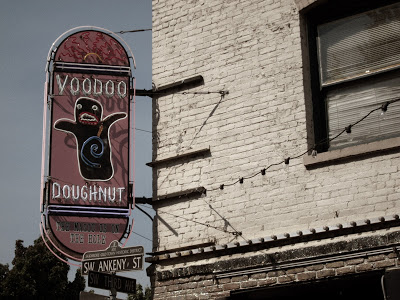 Our new to Portland host Clint warned us prior to ordering that the place was run like the soup nazi kitchen from Seinfeld. Brady took this as a que to take charge and quickly shouted out our order once we were at the front of the line. Once the large order was out he side stepped out of the way for the next customer. This effort to not get yelled at failed as the obviously annoyed doughnut artist stared back and reminded him that he only had two hands. 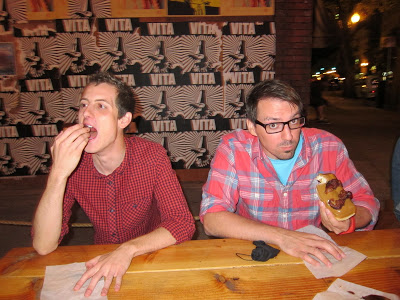 How do you follow up 2:00 AM deep fried glazed treats? With “Mancakes” for breakfast. We made our way to a cool little diner that serves up ginourmous pancakes which were recently featured on an episode of “Man vs Food”. The Stepping Stone cafe did not disappoint as we could hardly put a dent into our meals. Gluttony continues. 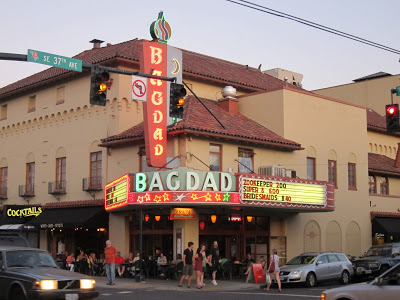 We spent a very chill afternoon digesting while strolling the many shops and bars of Hawthorne street. We enjoyed tax-free shopping at stores like Noun: A person’s place for things where vintage table fans were bought and Powell books (not the original but still neat). Most notable of our stops was the Bagdad. This 84-year-old theater also houses a pub, a pool hall (with what I am sure has the highest ceiling of any pool hall in North America),  and a tiny street side cigar shop. We relaxed sitting curb side and turned green while trying to enjoy some fine scotch and cigars.

That evening more great food followed as we went to a tiny Mexican restaurant called Santaria. Although we had heard the food is amazing there the real appeal was that it shares a bathroom with the strip club next door. There was just something awesome about ordering a chimichonga then excusing yourself to go to the bathroom to wash up and see a boob or two. 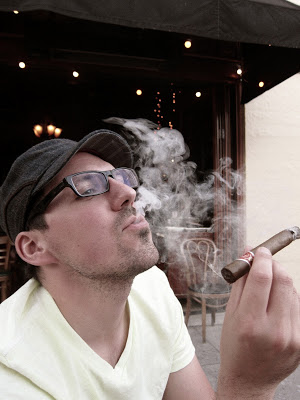 Turns out that Portland is known for its strip clubs and it has the most per capita in North America. In fact Mary’s, the fine establishment that shares a bathroom with Santaria, is the oldest in Portland…or so I was told by a kind homeless man (or hipster…I still can’t distinguish between them) while I snapped this picture.

BUT I digress. More on strippers later. Back to the food…good God the food. Santaria did not disappoint. Best Mexican food I have had outside of Mexico. On top of that the owner came by at the end of our meal and told us that our drinks for the evening had been taken care of. I literally sat there dumbfound with my jaw hanging for a good 30 seconds. Our drinks were taken care of??? We had 1-2 each and there was 6 of us. Never EVER has that happened. Not even if the service was shit and the food was shitier. I was in complete shock. Where does this happen? Portland.

Feeling as full as possible we opted to walk to our next location across the Willamette river. Another ridiculously cool bar and venue with a great patio. We began to wonder if a crappy bar existed in the city. Perhaps because our conversation kept going back to strip clubs our new to Portland hosts took us for last call to a strip club that had stiperokee. This tiny bar was cool enough without having naked women walking around. The fact that naked women danced to your terrible singing was a whole new form of entertainment. Portland. 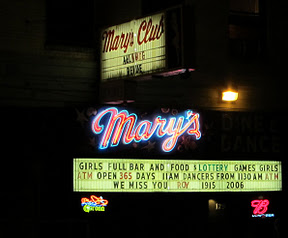 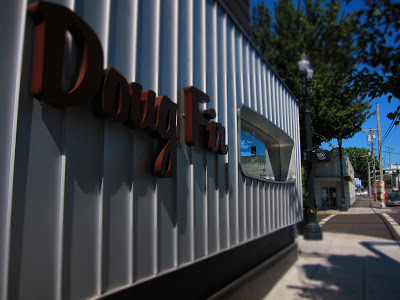 One final amazing breakfast (Doug Fir) and a stroll through a holiday Monday outdoor market and we were heading north. Sad to go but happy to come back. Portland.