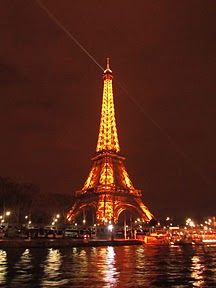 Our remaining time in Paris consisted of little sleep and a lot of touring. Erin and I are used to packing in a lot in our travels but not with 30 teenagers. It was go-go-go with no downtime. So much so that one girl almost peed her pants because there wasn’t enough time to stop for a bathroom break. Everyday we were up, fed, and out the door by 9:00 am. Sites and tours all day then arranged diners before seeing some more at night. When we arrived back at the hotel the chaperons would rotate supervising the kids as they used payphones to call home. Room checks followed usually around 11:00 pm and then coma like sleep. It was exhausting. We found ourselves catching up on rest by sleeping through a boat tour and opting to relax on the second floor of the Eiffel tower while the rest of the group queued and crammed their way up to the top. Turns out that one was for the best as the much smaller top floor was packed and made for an uncomfortable experience for the rest of the group. At one point Amanda had enforce mob control as she used her closed umbrella as a baton to beat back the crowd from shoving her (and other people’s) kids. Not sorry I missed that. The fact that we already done and seen these things helped make rest trump touring. That and I am older and either wiser or lazier.

As rushed as our time in Paris was I still got to see a lot. Again most of it was a second time around but neat to see again. The Eiffel tower is still standing. The Louvre is still massive. The Mona Lisa is still smiling (sort of) and the subway still smells like pee. New to me was visiting Fragonard, a famous french perfume maker. The kids got a kick out of eau du toilette and bought up samples for gifts. Next was a stroll by the opera house followed by touring inside Notre Dame which was great. Buildings that old and that impressive always blow my mind.

A trip out to Versailles was also an added bonus. While touring the palace and its grounds I kept asking myself “who needs to live like this?” A 17th century episode of MTV’s “Cribs” played in my head. A gold chain wearing Louis the XIV was showing off 1 of his 2000+ fountains. His pink aviators did little to hide the party he threw the night before. ” Yo check it out, this used to be a hunting lodge. We’d shoot birds and shit here.” We then toured through a few of the 700 + rooms in the palace, all of which Lou introduced with “and this is where the magic happens!” followed by a somewhat feminine giggle. 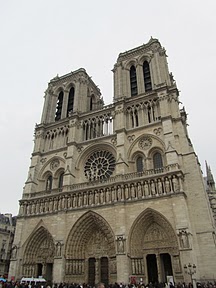 The little downtime we had was spent relaxing in cafes while the rest of the group shopped. I was a little disappointed that they didn’t want to use their free time to experience more. To be fair, I had little interest and energy left to tour things like the Louvre on my own at the age of 30. I can’t imagine how the kids felt with their teenage attention spans. So instead of buying some stinky cheese and fresh bread or stroll a narrow street on their own they ate at McDonald’s and shopped at H&M. I was amazed at their desire to buy things. Things that they could buy in Canada. I was once again reminded that these were kids from a very small town when I overheard a conversation about the convenience of living in the city. “It would be so great to be able to walk next door and get your groceries and stuff. It’s like living in Sarnia. They have a mall.” Dream big children. Dream big.

*Pictured – Our sometimes clueless guide giving the kids a “tour” of the mall. ie. led them up the wrong way and were coming back down. Paris with kids.

With that we said Au revoir to Paris and headed for our night train to the always sunny Barcelona. This time around I escaped France without getting punched in the face by a knife wielding hobo so its no shocker that I warmed up to the city.