On the tail end of my amazing trip to the Middle East, I got to spend an incredible four hours in the Oman Air first-class lounge. From spa service to a personal chef, this was a memorable experience, to say the least.

The Oman Air first-class lounge is located in the brand new and stunning Muscat International airport. Even if you aren’t travelling first class or business, the Muscat airport is certainly a step above with plenty of comfortable seating options and services throughout.

The Oman Air first-class lounge is located on level five and is accessible by an elevator just past security on the left.

Service and amenities at the Oman Air first-class lounge are, fittingly, first class.

I arrived for my flight four hours early and clearly caught staff off guard. I would later find I was the only first-class passenger that day. This made sense as I saw the bartender sprint to the check-in counter when I arrived at the empty lounge. 😂

Upon entering I was greeted by a handler who showed me around the empty lounge and asked where I would like to sit. There is no shortage of seats. I lost count at 40. There’s no way even half of that can be used by first-class passengers. All that to say, you won’t have any issues spreading out and relaxing here.

After I was seated I was greeted by the bartender and offered a drink. Since I was visiting during Ramadan, options were fresh juices, soft drinks, coffee and tea. I requested an orange and carrot juice followed by a handcrafted macchiato. The bartender served me dates and an Omani coffee in between.

A dedicated Oman Air first-class lounge chef also greeted me and offered breakfast as I was early. There was no breakfast menu and I essentially could have asked for anything. Instead of getting creative, I decided to set a seating time for lunch and said I would glance at the menu shortly.

I was also greeted by the spa attendant upon arrival. First-class passengers get a 15-minute treatment complementary. I took a look at the menu and booked a 25-minute shoulder and neck massage, costing eight extra Omani Rial (~$20 USD). I opted for a slot that allowed me time to enjoy my coffee and surroundings.

At the appointment time, I was escorted to an elevator and up to the spa. It is, like the unusually large lounge, much bigger than expected. Each treatment room, for example, had a dedicated shower and washroom. There are several of these rooms.

The massage was great and certainly gave me first-class treatment before my flight. While exiting, I noted the spa has a Hamman. Again, much larger than expected. Had I known this in advance I would have spent 20 to 30 minutes here before my massage and then showered at the airport spa. Next time and a tip for your visit!

Other notable amenities in the Oman Air first-class lounge include a dedicated shower room decked out in gold and a computer station for use. Wi-Fi access is free however it was surprisingly slow when I tried it. I still had to plenty of data left on my Airalo eSIM so worked of that instead.

At my requested meal time, I made my way to the dining area and was served shortly thereafter. I selected the Arabic Mesa and enjoyed the best baba ganoush I have ever had.

This was followed by a local king prawn dish. When they were served however I noticed something odd about them.

It was all very delicious and one of the better meals I had while visiting Oman. That said, I was confused about the size of the prawns. I spoke with the chef and he let me know that king prawns were out of season. This would’ve been good to know when ordering as I might’ve selected something else and something local rather than bagged shrimp.

Nevertheless, the meal service was fantastic. I followed it all up with cheesecake with a mango and chocolate sauce along with an espresso.

Again, as I was visiting during Ramadan there was no alcohol in the Oman air first-class lounge. The shelves behind the bar were literally bare. This was too bad for me as the lounge typically offers a whiskey tasting featuring bottles that go for over $1,000 per. Again, next time.

Overall, I had a very pleasant and relaxing visit to the Oman Air first-class lounge. If/when I visit again I will be sure to take advantage of the Hamman at the spa and arrive that much earlier. Also, it’s good to point out that first-class passengers have access to the business class lounge. There’s a golden gate separating the two areas. I asked about access and the bartender happily gave me a tour of the business class lounge. It had several notable highlights including nap rooms, cinema rooms, a cigar lounge, and a child’s play area.

The biggest takeaway is that they offer guests who have a three-hour or longer layover room at the airside hotel. I read a different review on Oman’s first-class lounge where the blogger complained about the poor nap room in the lounge on his 10-hour layover. Had he asked, he would have likely gotten a free hotel room.

What say you?
Thoughts on this Oman Air First Class Lounge Review?
Let’s hear it! 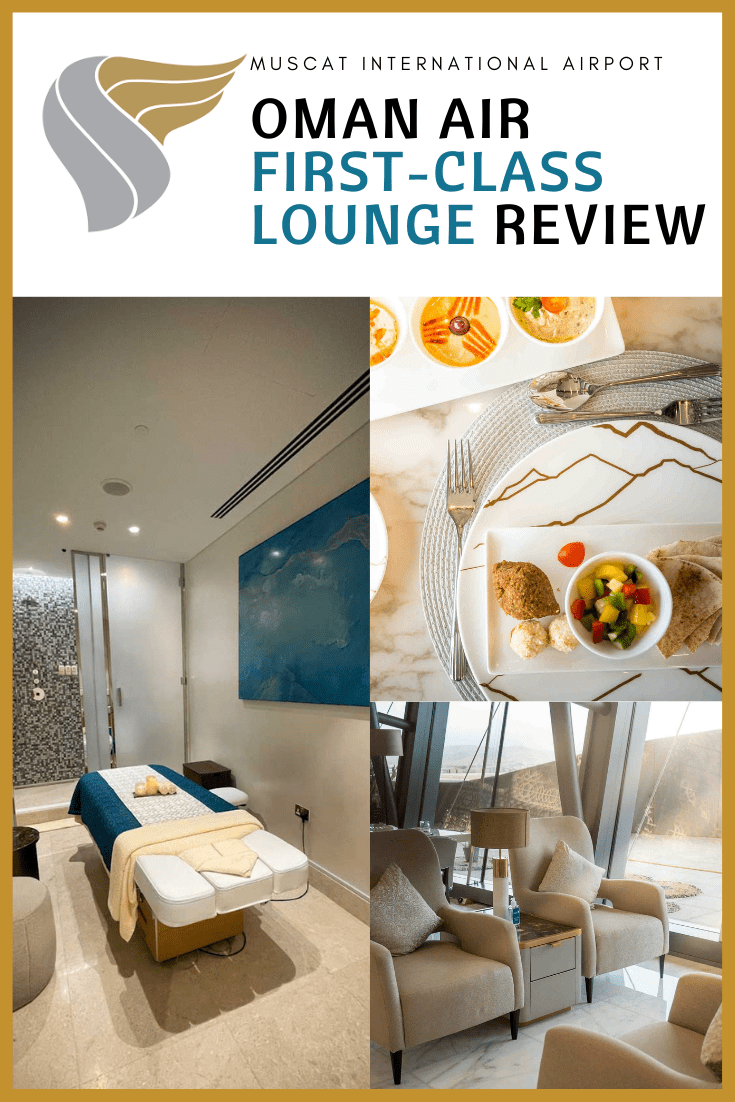 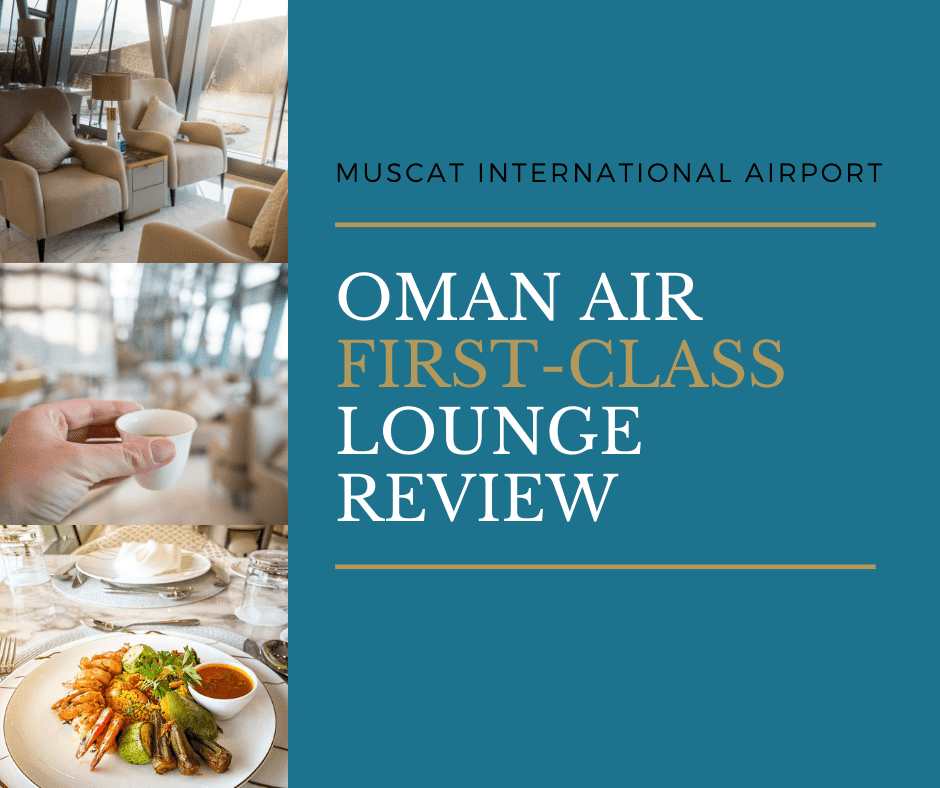 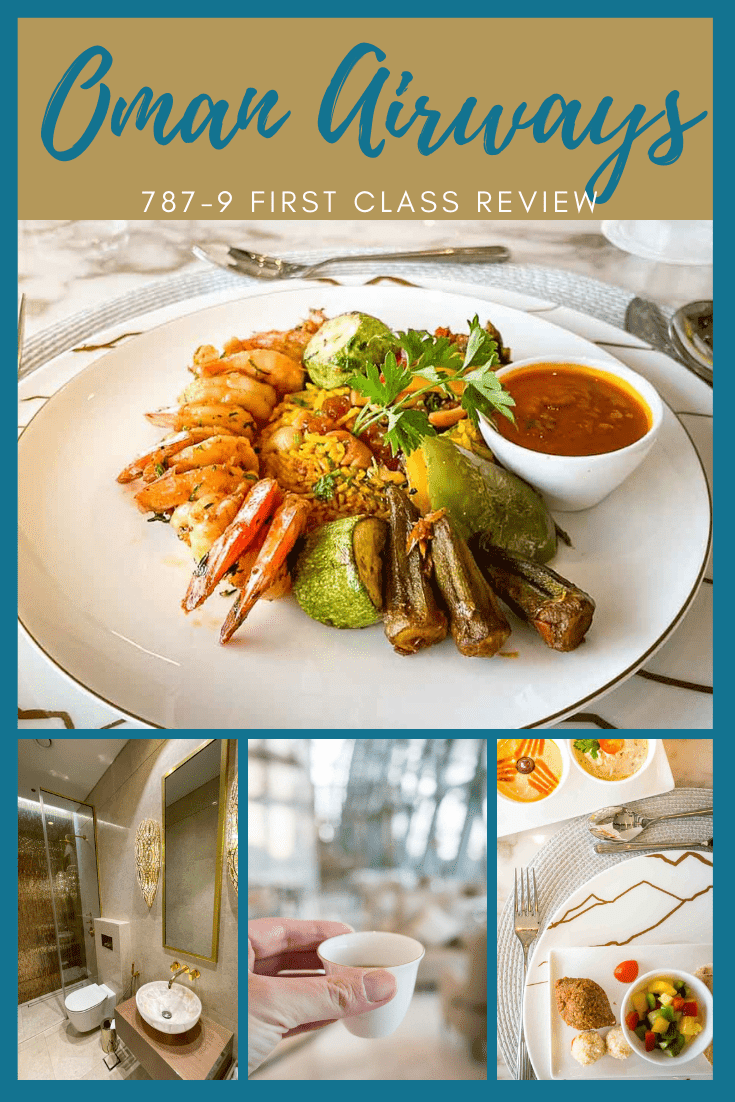