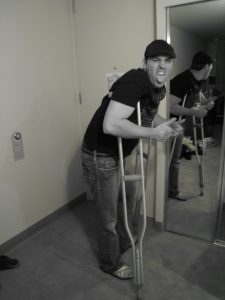 Arrived in LA after a 2 hour plus delay. Before that delay was the realization that I booked my flight or the wrong day. I was actually booked on the Sunday flight so it cost me $200 to correct that and get on the same flight as my friends, the Boyds. Very good start. Saturday was a write off, Justin and I went for drinks on the strip then crashed. We got up the next day and did a ton (more on that later) We walked all day which resulted in my being in crutches today. Not sure exactly what happened, nor do the doctors(?) I saw in West Hollywood, but bottom line is my foot is f’d and that is not good. On the plus I have tried to make the most of it. Last night we saw some live comedy and had a blast and tonight (after the day of x-rays and waiting rooms) we went to the world famous whiskey A-Go-Go and had a blast.

The Jeep, by the by it amazing. I am giddy like a school girl every time the valet attendant brings it around so that is good.

Off to bed as the Whiskey tab is catching up with me. Picking up Erin in the AM and am seriously hoping the foot comes around so I don’t have to cut it off. It is just that bad.

Much much More to come…