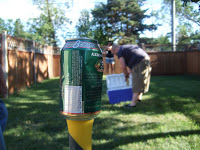 Ah Canada day. The day that Canada gave Canadians beer and thus happiness to all its people. Erin, Justin and Allison were all in town to partake in the stoopidness. Mike and his girlfriend helped us celebrate with the consumption of many amounts of beverages. This was all aided by a make shift game of “Beers-bee” or as I call it, “Friss-knock” The object of the game is to knock the opposing teams beer can off a post with a frisbee. Easy right? Not so much when beer is drank for every dropped Frisbee, bad throw, good catch etc.. We were sadly being beaten by the girls so to prevent Mike from celebrating Canada day all over my lawn, we lowered ourselves to duct tape our can to the post. It was not a proud moment in Friss-knock.

After we called a truce there was games of lawn bowling and then a BBQ that probably saved the day for more than myself.

We eventually made our way down to the legislative grounds to watch the city-sponsored fireworks. I have been in Edmonton for roughly 7 years and have yet to see them so I think I was due. We arrived at the packed grounds and made our way to the river bank. There we found a water fall flowing off the High Level bridge which was a nice touch. The show did not disappoint as the show lasted a good 15 min. Thank you Edmonton. 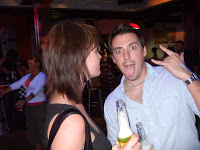 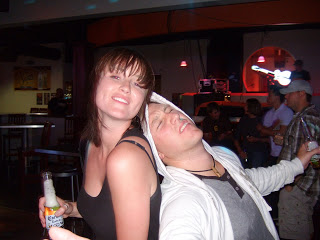 Once it was done we made our way down to the pedestrian walkway to cross the North Saskatchewan River. To our surprise the bridge was closed off till the fireworks crew could search the grounds for any fires. This sobered us up as we had to walk to another bridge then up the other bank. The one good thing about the walk is it gave me a chance to break out some of the numerous Cigars I had brought back from the Dominican. The reason we were relentless to cross was to get to a bar on Whtye av for which we had tickets for. There were several bands on the bill but by the time we arrived there was only one left. We watched the last show, drank some more and then shut the dance floor down as the only ones left. Good times were had.
Back to work Canada.