So I booked the cheapest flight out of town. I would have liked to have taken the ferry to Estonia and worked my way south though eastern Europe but then I would have spent time in every country and would have taken at least a month to get to Croatia. Sadly, I don’t have that time anymore. The clocks ticking and I can feel it. So I took a faster route to Krakow via Scotland…does that make sense? Are you with me?

I got to North Kilt-Town (Edinburgh) Sunday morning and the strangest thing happened, everyone was speaking English. From being in non English speaking countries for over 3 months it was very odd to hear. You tend to phase out what everyone is saying when you don’t understand and you ears perk up when you hear someone speak English. I couldn’t sop turning my head every time someone would talk. Took some adjusting. 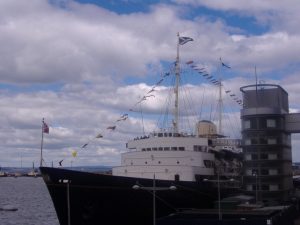 My guide book dubbed Edinburgh as “Athens of the north.” I found this bang on as I took a double decked bus into town and saw the Edinburgh castle. Much like the Acropolis, the castle is perched high above the city. The buildings and cliffs are very easy on the eyes and it really is a gem.

I spent the day touring the old town then spent a lazy afternoon hanging out at this funky cafe with a couple Aussie girls I had met. Later that night we took in some open mic venues. There is no shortage of live music in Edinburgh.

The next day I toured the castle which was very cool. Lots of different museums to see including the Scottish history of war museum which was very interesting. After that I visited the resting place of Gray Friars Bobby. This was John G

That night I found another open mic and played a short set which was a lot of fun. Went well except for the memory loss of lyrics and more than occasional voice crack. When in Rome. Or North Kilt-Town.

Fueled by a huge English breakfast, I spent the next morning touring the Royal yacht Britannia. This was the Royal families choice of transport from 1953-1997. By my calculations the Queen and company spent all there time here as the boat had traveled over one million miles. That is equivalent to a trip around the world for every year it was in commission. Maybe someone reading this can tell me what the hell the Royal family does other than party hop around the globe? Maybe I am royalty material? 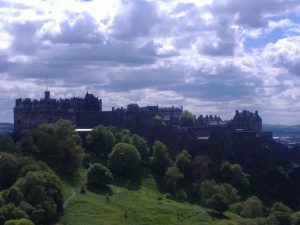 The boat’s high points for me was the immaculate engine room and the narwhal tusk hung in the massive dining room. This was given to the Queen in the 70’s while visiting the Northwest Territories.
After seeing how good the Royal family has it I visited the Royal Scott monument which is a very cool Gothic steeple. Climbing the ever-narrowing 287 steps I was presented with one of the best city views I have seen thus far. From there I got some great pictures of the castle and cliffs over looking the city.

I then went to the train station to see about going north to Inverness which is on Loch ness. There was a train leaving in an hour so I ran back to the hostel and packed my bag.

The ride north was amazing and rivals the Oslo/Begen line for most scenic. Scotland is a beautiful mix of hills, mountains, farm land, and ocean coastline. Green, brown, orange, and yellow hill sides spotted with white from all the sheep, are everywhere. I arrived in Inverness and found the last bed at a very friendly hostel. One of the staff members was from Edmonton so we got talking about the Oil over a few pints then headed out for some Scottish music with some Aussies. Another interesting mix.

I toured around town a little longer than caught a cheap bus to Glasgow. FYI if anyone is visiting the UK, megabus.com offers bus rides from 1 pound. This is especially good as euro rail is not valid in the UK and trains are pricey.

Anyway, I got to Glasgow around 8:00 pm. I locked up my bag at the bus station and strolled the downtown area for a few hours. I met some interesting locals whom I could not understand at all…even the sober ones. Very odd that English in Edinburgh and Glasgow are so very different and the cities are so very close.

After that I spent a not so fantastic night at the airport. Saved a few pounds but was very tierd the next day. Next stop, Krakow.

Written By
Shaun Robertson
More from Shaun Robertson
With rising global temperatures, erosion, and Instagram geotagging, some of the worlds...
Read More