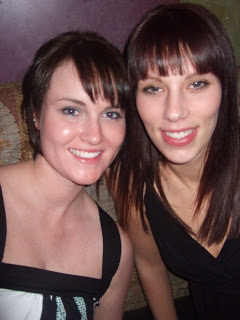 So after making an “appearance” in Yellowknife, we were off to Edmonton for some New Years eve festivities. First we met up with my newly wed friends the Fidlers for some drinks. We then headed out to an over priced club to ring in the New year with Taj and his girlfriend. 1 hour, $200, and a very long cab ride later we were at Kathy’s brother’s place for some PG fun. Wii and karaoke is how I began the 2008. Let me just say, hearing Jason sing a Filipino love song called “Boobs”and scoring 96% on it blew my mind.

All in all a tame New Years but fun none-the-less. Last year I was pretty sad to see 2006 come to an end, after all it was an amazing year. Little did I know what was in store for me. This past year I have seen a lot of cool things and defiantly got around. Vancouver, Kamloops, Panorama, Calgary, Yellowknife, London, Toronto, Montreal, Buffalo, Detroit, Las Vegas, Orlando, Boston… heck, I was in Winnipeg..twice! I got above the arctic circle and swam in the Caribbean…AND I sat court side for a Celtics game! It’s gonna be hard to top that although I’m not trying to, I’m just excited to see what 2008 brings. I don’t see myself traveling as much as I did in 07 or 06 but you never know. I have just finished planning my first trip of the year which will bring me across the Continent twice in early February. Stay tuned and Happy New Years!