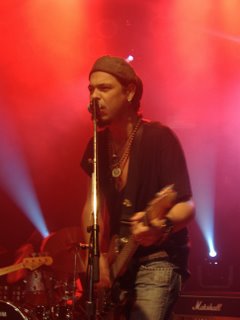 Scott had been craving a ceaser the entire time we were in New York. This craving carried over to Erin and I so on the way back to Toronto we hit the duty free shop. FYI, booze is cheap in the states.

The next day I slept till noon and it was great. Erin had to work at 9:00…she is a trooper but if I had her job I would be up and excited to. She works in media and gets great perks. Her friends also work in media and one of them got us tickets to the Trailer Park Boys movie premier party. It was a blast, a mix of the Trailer Park Boys and Canadian musicians. There was performances by Thornly, Daniel Greaves (formally fronted the Watchmen) Helix, the drummers form the Tea Party and OLP, the guitarist from Rush, the singer from Junkhouse, Kim Mitchels band, and Bubbles himself who performed “Liquor and whores” with some of the previous mentioned musicians. It was a great time, so fun and so funny. I wish I followed the show as most of the characters were there including the fat guy that is always topless. I even peed next to the lead guitarist from the Tragically Hip…at a urinal of course. I didn’t go up to him at the bar and take a leak on his foot or go up to him and say ” aren’t you so and so from the hip?” while I piss my pants out of excitement…that would be sad. 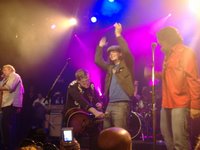 I think the coolest thing about the party is that it was in a small venue so, as seen in the pictures, we were right there.