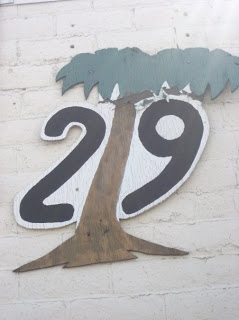 If you would have told me last year that I would be bowling and drinking $2.00 bottles of beer in the small desert town of 29 Palms I would have said “Where is the magical place you speak of?” Well… the middle of nowhere. The middle of nowhere in between the Joshua and Mojave National parks to be exact. This was are stop for the night before heading through the Mojave desert, mainly because it was the biggest dot on the map in the area. With little to do or see in the town (as confirmed by the front desk girl at our hotel) we decided on bowling. Apparently it is the thing to do in this small town as the place was packed. Erin cleaned the floor with us bowling wise but booze was very cheap so were all winners really.

We picked up supplies and fuel in the morning and then headed off through the desert. The supplies consisted of “purified drinking water” (which I am pretty sure came from a garden hose) and trail mix. The plan was to drive north on the highway through half the park then off road the rest but after talking to a park officer we decided on a much shorter trek. (apparently the route I wanted to go would take 2 days) 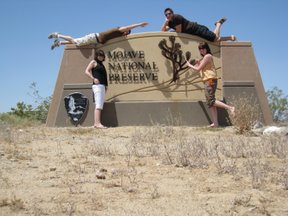 Getting off the road was one of the things that sold me on buying the Jeep. It was one of those things that was a “no big” deal breaker. What I mean by that is I was going to buy the Jeep anyway, I just had to tell me self things like, “If I buy the Jeep in California I can drive through a desert!” It’s the little things like that that can really sell you on a tough decisions even though you are already sold. Mojave 4×4 here we come.

Half way through the desert we stopped at an abandoned mine and had some left over wine from the sunset stop. Again, it was an odd moment. There we were drinking Australian wine on the tail gate of a luxury SUV on a site where people wondered the desert on horse back in the blistering heat with little drinking water not but 100 years earlier. What a world we live in now. 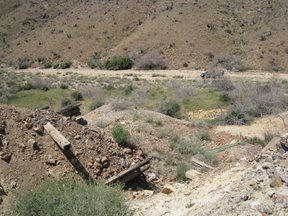 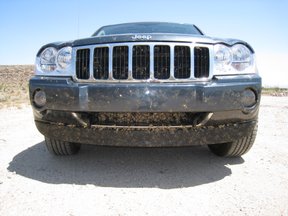 Sadly our dusty, bumpy, off road Mojave 4×4 adventure came to an end as we met up with the highway on the other side of the mine. By that point we had all had our share of sand, cactie and bugs so we decided heading to Vegas was in everyone’s best interest.