Meet me in the middle of Canada 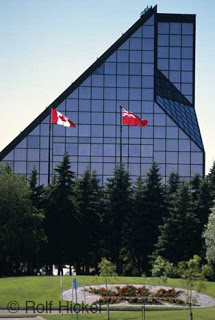 I have been all over this great country. From the west coast of Vancouver Island, the farthest eastern point you can can go in Canada (and North America) and as far north as the arctic ocean. Now I can proudly (and some may say boringly) say that I have been to the center of it all. Just east of Winnipeg there is a sign announcing the geographical center of Canada. I wanted to get a picture of it but passed by it twice with little heads up of its presence.

Just beyond that is another interesting site, the Canadian Mint. It would have been nice to take a tour and find out what kind of people pass pictures of animals as currency but was on my way home from a busy day. Maybe if they minted mints I might have been more interested.

I had just returned from a sleepy town called Sprauge which is near the US border. Interesting note, Manitoba is surprisingly far more into country music and Christan rock than Alberta. I spent the entire 2 and a half hour drive constantly changing radio stations.

That night Erin (remember her?) came to town for the weekend. What did we do for 2 days of unsupervised excitement in the middle of Canada? Ate breakfast and bowled. That’s how we roll. 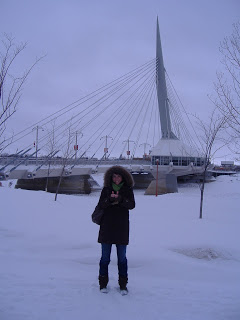 Erin arrived pretty late Friday night so we had a late breakfast the next day. Pictured here is my ham and cheese pancake portrait of Erin. Noticed the delicious use of bacon hair, bacon eyebrows, bacon lips, and bacon bacon. Needless to say this prompted a 4 hour nap.

After a bight of darts and too many cocktails we were off for another breakfast treat. Winnipeg recently erected a beautiful bridge next to the forks. The powers above thought it would be a great idea to place a restaurant smack dab in the middle which would offer customers a great view of the mighty Red River. It is a great idea however after they completed this impressive building and after spending over a million on plumbing alone no body wanted to move in. thus it became Manitoba’s equivalent to Denny’s. I thought this was great. In any other city it would be a nice restraint but in Winnipeg its Burton Cumming’s run Salisbury house. Aw some, flapjacks with a view!

getting my portrait done we strolled through the forks market where Erin picked up some gifts for her family…as..did…I? Crap.

That night we bowled. Erin had been to the peg once before (at least a couple of years) for a bowling tourney. I just assumed that was the thing to do. We met up with a high school chum

of Erin’s (whom is now living in the peg) and hit the lanes. Sadly and as predicted, I got served. Erin does not take bowling lightly. She even brought her own shoes, ball, and special glove that keeps her palms from sweating. Just kidding…or am I?

After we got our bowl on it was a quick nap before heading to the airport to drop Erin off.