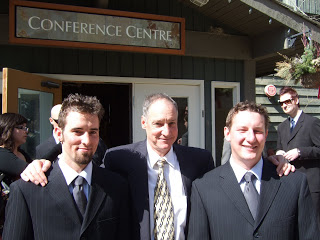 I thought the stag party would have prepared me for the carnage at the wedding. I felt I had trained hard and was well prepared. I didn’t however count on getting a cold prior to it. For 3 days I fought it with neo-citron and booze which makes for an odd feeling. Energy wise it was a series of highs and lows, peaks and valleys. Lots of cat naps took place. It was a terrible feeling and I was looking forward to the end of the weekend as my body could not handle the abuse. For starters I drove to Panorama with Jon and his girlfriend. Now Jon has the metabolism of a tree squirrel so for the safety if my health, I can only hang around him for short periods. For the seven hour car ride it was nothing but junk food and KFC. That night we drank. The next morning we drank and then again that night we drank. There were very brief periods where alcohol was not being consumed, namely sleep and the occasional neo citron break.

The day of the wedding was beautiful. 18 degrees in the Canadian Rockies. The ceremony was short and sweet and the reception was great. Brooks, the MC, somehow managed to drop words like “sodomy” and “fetus’s” into his speech as well as a story of Sarah fitting a beer can in her mouth. Lovely. Jon’s toast was great as he did a slide show of Maury as a kid. I love Maury like a brother but he was one goofy looking kid .

The rest of the night is blurry as for some reason I was stealing Jon’s cousins beer and slamming it at every opportunity. Not sure why really, I thought it was hilarious for some reason. I think I should send him a case.

I spent the rest of the night on dancing to the live band and then in true Wood fashion, dancing to Roy Orbison in their living room till 4:00 am.

Again great weekend even though I was ill. Congrats Maury and Sarah.