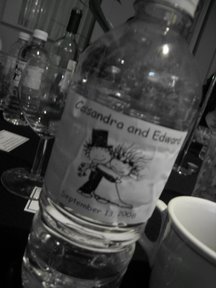 As if in some sort of ridiculous fight, Erin and I took separate flights to Toronto. No, we are not well of enough to say “your annoying me. I think I will take the next flight.” I wish. No, we took separate flights because I was flying on points and Erin on the cheaper of the two airlines. We were off to Toronto for Erin’s friend Casandra’s wedding as well as a visit with the Pongracz’s. Erin was put in charge of drink tickets for the wedding reception so I thought it would be best to tag along. You know, to make sure the tickets got distributed in an orderly and fair fashion. Plus their were rumors (later turned out to be true) of cottage roll(s) at Erins folks place. Sold. Put me on a plane…just not that one.

The wedding was very nice (and very quick). It was held in a park where the X-men movies were filmed. Cool. How many people can say they tied the knot where Wolverine lived? Apparently lots of people as Casandra’s wedding was one of many on the grounds that day. 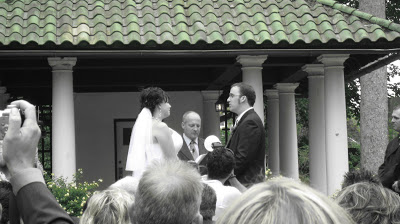 The reception was great (and blurry). I guess thats what happens when your girlfriend controls the drinks. Perogies and funny speeches helped too.

The next day (afternoon) we headed out in the convertible Erin rented and made our way to London. Although it was raining on the way in Erin insisted on popping the top so her mom could see:

A few relaxing days followed. I got a guided tour of London which included the lush university grounds and the walking paths along the river Thames. Not sure why but being at Erin’s folks place always tends to be a detox of some sorts…

My last day saw us once again put the top down and head for a drive. This time to the beach. Even though the season was long over it was sunny enough to make the trip worth while.

On the way back we stopped in St.Thomas, home of Jumbo the Elephant and Joe Thorton….coincidence? I got different stories from Erin’s folks on the giant Elephant. Here is what the Internet has to say about Jumbo. Oh…and there was rock band. Video to follow.