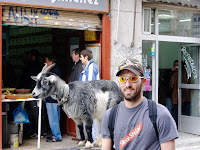 W e arrived at our downtown hotel in Madrid during rush hour on a Friday. This made unloading 50 people and their luggage from a bus interesting. I had no memory of Madrid being such a busy city. Jon and I spent very little time in the capital. Bitter from a cold spring we were eager to make our way south for some warmth. We had little interest in the many museums and what ever else the city had to offer. Instead we walked through a giant park and more notably, a flea market that had a goat standing on a pedestal and a large lady singing while her husband played accordion. This disinterest 5 years ago made for an interesting stay this time around as Madrid has a lot to offer.

After a group diner we were allowed to wander on our own. Naturally Erin and I found a nice pub and had a Guinness as it just happened to be St.Patrick’s day.

We spent another day sightseeing by bus and by foot. Thankfully our subway adventures were left behind as our hotel in Madrid was located in the heart of downtown. Our bus tour took us through old and new Madrid. Both sides boasted interesting architecture such as the massive post office that looks like a palace. Smack dab in between the new and old parts of town is the massive arena where Real Madrid plays. 80 thousand + fans pack in there and try not to set the place on fire. 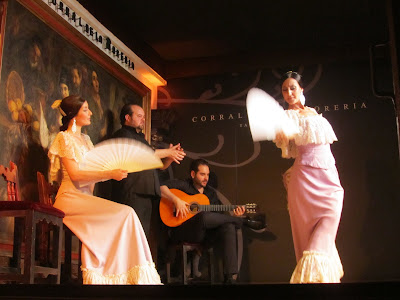 The afternoon was spent wandering the huge Royal Palace which is really a slightly less flashy and flamboyant Palace of Versailles. Legend has it that King Philip of Spain saw a repeat episode of MTV’s Cribs and wanted what King Louis had in France. Giant peacocks walking the grounds give Phil’s pad a slight edge.

After the Palace we were left to roam the massive Prado museum which has a bunch of paintings by famous dead people. Clearly by this point I was museumed out as were the kids. We left there to enjoy a flamenco show. There is a sentence I never thought I would say. It was amazing. Most notably the flamenco guitar and the male dancer whom I was convinced was Jason Schwartzman possibly researching a new role.

Dinner that night was an “authentic” tapas night which turned out to be very touristy but the kids had a great time. So much so that camp songs were belted out as we walked the tight corridors of the old downtown quarter and into the chocolatier restaurant where we pumped the kids full of sugar for desert. A group from the states sitting next to us actually thought we were from the U.S.A as they said we were loud enough to be American’s. Didn’t Erin and I know it. We walked a few strides behind the singing group on the way back to the hotel making disapproving eyes with the locals as if to say “F’ning tourists” But the kids had a blast and that’s what it was all about. 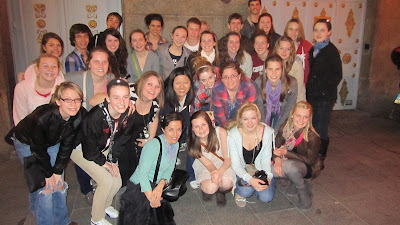 A quick 3 hour nap followed before heading to the airport for our long journey home.