I can now truly say I have p 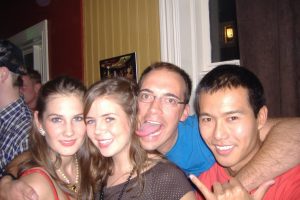 artied like a rock star. We have been in Iceland now for 3 days and all we 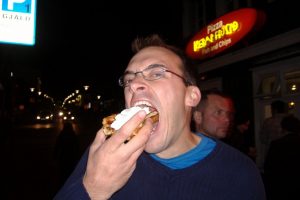 have seen is the hostel bed’s and a lot of empty drinks. We arrived Saturday morning and, as seen by a previous post, tried to adjust to the time. It was a worth while rest as we headed out on a pub crawl that lasted till sun rise. My brother drank like a Viking…or at least he thought he was one. I’m not really sure what that means either.

The first bar we went to was all you could drink. Scott and I did not take that in to consideration as we got into a bottle of vodka before we headed out. It was all downhill form there…but in a good   way. We had a blast and met some good people from Australia, England, and Norway. Even our “guide” was from Nova Scotia and the majority of the group was made up of cute Norwegian girls. It was a good night. Scott was the drunkest man in Canada…and he was in Iceland. The night ended outside a hotdog stand. Scott had finished his second of the night then appeared out of nowhere with this waffle complete with ice cream. It was hilarious…or at least at the time it was. No wait…it’ 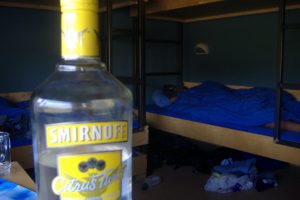 s still pretty funny.
The next day we slept and its too bad cause it was gorgeous out. We finally mustered up enough energy to walk next door to one of Reykjavik’s many natural hot springs. If someone told me a year ago that I would be in Iceland…In shorts…In September…I would have said coooool.

After a relaxing soak we grabbed a hot dog (which are amazing here) and headed back to the hostel where we proceeded to finish off yesterday’s vodka…And then some. It was another great night topped with card games and sing a-longs. It felt like I was backpacking Europe again…Oh wait….

Today Scott is asleep…and rightfully so.

It’s another great day out and probably shouldn’t waste it…besides, it is almost happy hour.