I know I have said this already but updates, they are a comin. Even though I haven’t been going anywhere I have been busy. Sadly I have turned down trips to Mexico and have been refraining from last minute seat sales to anywhere warm. It hurts to show control like this but it is for a reason. Things will make sense soon. Trust. 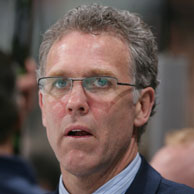 One thing I have been doing is taking in a lot of Oilers games. I have friends that for years have been ragging on the Oil. I have always defended the team from the nay-sayersthat call the team heartless hacks and bums. Well this year I am coming around. Chalk it up to the ridiculously high expectations put on this years team or the fact that I have probably dropped a grand in stadium beer alone. Either way I am finding myself increasingly frustrated, annoyed, and to a certain degree, hurt. And why not? I have invested way to much of my personal time, money, and health into this team and for what?? Another year fighting for eighth place? I think we all deserve better. The fact that the stadium (run down and sketchy as it is) is sold out every night doesn’t warrant the need for change. Is Edmonton the next Toronto in the way that fans are handcuffed? Maybe.

I could go on about this but it will just make me mad. That is not a good thing. My friend Cort summed it up pretty good with a recent rant on the state of sports in general and the addiction fans can get:

I am a Sports Slave.

Its a spell that has held me rapt since Grandpa took me to watch Canada play hockey at the ’88 Olympics. I don’t remember much about the game, but I remember Andy Moog was in net. I liked Andy Moog. And I remember being bitterly disappointed Canada lost the game, even though I didn’t know what exactly the olympics were.. or who it was exactly who just beat us.

My obsession was just beginning. I would pour over the Edmonton Journal sports section daily, sometimes just staring at statistics. In junior high I filled my ledgers with doodles of Oilers, Blackhawks and Broncos logos. I had the poster. The jersey. The ball cap signed by Jeremy Roenick and Chris Chelios. I would wake up at 5am on a Sunday to Watch Villeneuve battle Schumacher. I would walk through a blizzard for half an hour to watch a God awful Oilers team, whose best player was Zdeno Cigr. I went to college with the idea of becoming a sports caster. You get the idea. I wasn’t always proud, but I was dedicated.

There were successes. Joe Carter crushing the 2-2 to deep left. Todd Marchant going shelf on Moog in game 7. Elway shaking the gorilla on his back vs the Pack. Canada winning gold after 50 years in Salt Lake.

But the list of heartbreaks is longer. Peter Puck sold The Greatest hockey player for Jimmy Carson and a Brinks truck. The Oilers miracle run fell one game short. Hasek stopped Shannahan. Forsburg made a postage stamp out of Sean Burke. Steve Smith played the bank shot on his birthday (bonus points if someone can name the times & places of the last three). And then Greg Moore hit the wall hard and died right in front of my eyes.

I think after that I just kept watching sports out of habit. It certainly wasn’t because there was a whole lot to cheer for. Gary Bettman trashed the NHL to the point where neither the game nor the franchises are recognizable. Really? Theres a team in Raliegh, North Carolina, but not Quebec? Half the players in the league are French! Then he cancelled a full season. That was a fun year. Bud Selig and dozens of greedy baseball owners turned their heads while juiced up freaks made a mockery of America’s greatest pastime. An NBA referee was caught literally fixing games for the mob, and David Stern says its just an isolated incident. Nothing to worry about. All is well now.

And all these men still have their jobs! If only we all could be rewarded this way in our careers.

I want to quit you, Sports. Let me go. You waste my time and make me fat. You raise my blood pressure and make me short with people whom I actually care about. You disappoint and disgust me so often Im not even surprised anymore when a murderer like MacT can coach for a decade – never finishing higher than 7th – and still keep his job. You have come to offend my every ounce of common sense and decency and fairness.

And I WILL quit you Sports… right after The Masters. Seriously, did you see Tiger last week?

Too funny but more importantly too true…which is really too sad.