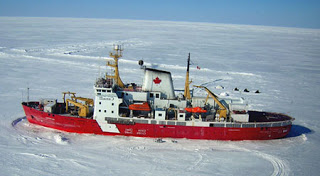 My love of travel was definitely influenced by my older brother who has literally been everywhere.He has set foot on every continent excluding Antarctica, which he is set to do next year. Yes indeed, he gets around. His latest adventure is definitely something else. For the next couple months he is on an ice breaker in the high arctic crossing the north west passage, a route that very few have ever traveled.

“It’s still a bit overwhelming to think of the magnitude of the project and of the adventure. We will traverse the Northwest Passage following Amundsen’s original route of 1905. The captain told us last night that only a few thousand people have ever completely traversed the passage, and even fewer along Amundsen’s route through the Bellott Strait (a narrow opening between the Boothia Peninsula and Sommerset Island.) Most ships do not go through this channel, which is only a mile wide at the narrowest point, and the CCGS Amundsen is the largest ship to ever complete this route.”

How did he end up on this world famous ice breaker? All in the name of science and health and all part of his job…sort of. Scott managed to get himself involved with an Inuit health survey which will see him running various tests with locals from arctic communities. An expensive yet important task to say the least.

And how is he finding life at sea so far?

“The crew of 40 is based in Quebec City and the level of English spoken varies from very good to almost none. It has been a good excuse for me to practice my French and I’m finding that I get by better than I thought in most conversations. As the science team we are considered to be “supernumerary crew” and the captain assures us that we will soon feel right at home. We can eat in the regular cafeteria or in the officer’s lounge as we wish and are welcome to visit the bridge just by showing up and asking permission to come on to the bridge (“la timonerie” was my word of the day on Wednesday).”

“The ship itself is quite nice. The room is actually larger than the one I had on the Carnival Cruise Lines when I went last year but this one seems to be missing the mini-bar.”

“They have “Bar Night” three nights a week where you can buy drinks (maximum 5 per person which is 3.5 more than I need to get in trouble) at the bar between 8 PM and 11 PM. They had to raise the price of drinks due to the cost of flying alcohol to the North so instead of $1.50 we pay $3 for beer, wine, or mixed drinks. I think I can budget for that although I’m going to have to learn to like Molson Dry.”

See I was jealous about this trip before I knew there was beer. Le sigh. Stupid landscaping. I need a travel fix.

I will post more about his trip as the emails trickle in. Until then you can follow along with the Inuit Health surrvey blog @ http://inuithealthsurvey.ca/blog/

Also, for more info on the ship: