I Left My Heart in San Francisco 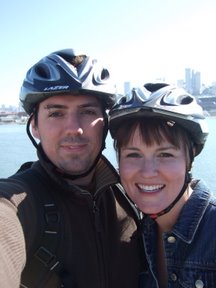 Let me say, Tony Bennett had it right. San ran is an amazing and beautiful place. And I definitely Left My Heart in San Francisco. We got to experience this beauty first hand as we spent the day touring its waterfront, parks, bridges, beaches and hilly hills. 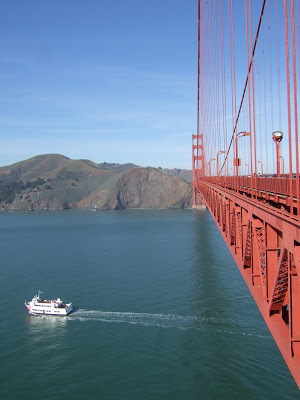 As we hoped off the cable car near the wharf we spotted a peculiar looking mini roadster. Now the plan was to rent bikes but these things were just too intriguing. After breakfast we went to the shop that rented them to inquire. A Go-Car is basically a GPS guided two seater, 3 wheeled moped. Sold. Only problem is that its top speed is 30 mph so they are not allowed on the high ways and especially not allowed on the Golden Gate Bridge. Now being the kind of folk who want to do the most they can in the little time there given, we opted to do both. First we rented the bikes and headed out along the shoreline to the base of the bridge. It was a perfect day, no clouds and plenty of sun so the ride was nice…and then the hills came. They weren’t actually that bad and once we got to the top of the bridge it was all down hill from there. The view from the bridge is amazing. Even though it was such a beautiful clear day, I kinda hoped for a bit of fog to get some different pictures but who am I to complain? 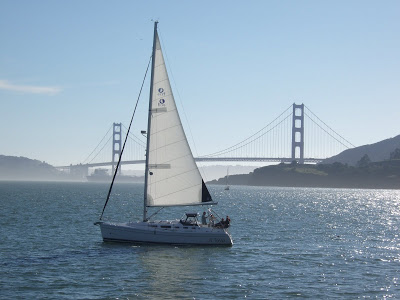 We continued on past the bridge and down into the picture-esq town of Sausalito. There are tons of shops and great looking cafes and restaurants there however we didn’t have time to stop. We quickly boarded the next ferry back to Pier 39.

And then it was Go-Car time. This thing is hilarious. Erin and I squeezed ourselves in and headed out to view as much as we could in the little time we had left. We whipped along the shore line beeping our road-runner-like horn at those who glared. We slowly made our way up to the ritzy area of the city (I say slowly as Erin had to actually get out and push as the little moped engine would stall on the many hills) We buzzed past Robin Williams place and onto Ocean beach, all the while getting an audio tour form the GPS. Next was Golden Gate park. We had no time to stop as daylight was starting to fade which is too bad, the park looks beautiful. 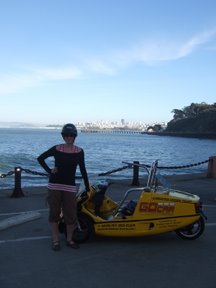 Instead we zoomed past happy park goers enjoying the California sun. 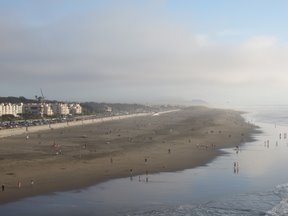 After the park we had had enough of the GPS tour and decided to hit some places off the tour. One being the “full house” house. 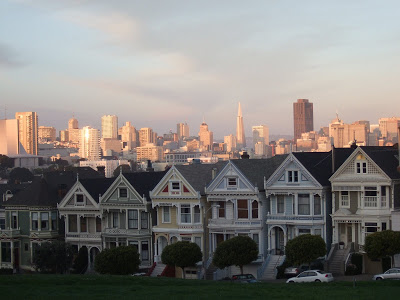 Next we decided to be daring and take the pathetic little car down the crookedest street. This proved more difficult than anticipated as we had to cross several hills to get there and on each hill Erin had to get out and push my fat ass up the hill. Needless to say we were killing ourselves laughing.

We pulled into the rental location just as dark set and just as the doors closed. We surely made the most of our little rental.

After almost exploding my bladder (public bathrooms are scarce in San Fran) we dined at a true California establishment…In and Out Burger. So good.

We got on the street car in an effort to get to the uber hippy area, Haight, for some funky shops and cafes. Unfortunately (or fortunately pending who you ask) we missed our stop and ended up in Castro…the gayest place to be gay. While we waited for the next bus I popped into a bakery and got Erin this tasty treat: 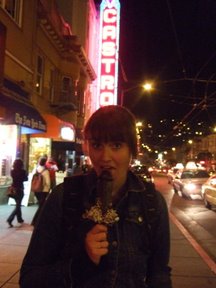 By the time we got to Haight the shops had all closed. We decided on a pint instead before heading back to Powell for, you guessed it, more shopping.

The next day we were once again off, Erin to Toronto, me home by way of Calgary where I had to work for a week. Let me say working after a trip like this is hard on the brain. My mind and body were beat but so, so worth it.

Also, I Left My Heart in San Francisco.