First off…I am alive and am having the time of my life! The Olympics are amazing. So many drunken Canadians…so much fun.

Getting to Torino worked out very well. Originally we were flying into Frankfurt then Milan.(Milan airport is 50km out of town) From there we were going to take a Train to Turin however the flight was overbooked from Frankfurt to Milan and we were offered 120 euros to fly an hour later. I asked if we could go to Turin direct and it was not a problem. We got to Turin tired but 120 euros richer.

Rita, the lady that organized a place for us met us at the bus stop and showed us the apartment. It was nice and very close to the venues.

We walked around town taking in the Torino night life. Very busy with the Olympics. The next day we went to the 7-2 spanking Canada gave Italy in hockey. Our seats were awesome. 7th row, center ice. It was a lot of fun and we met some cool people. The next day we were able to go to Curling very cheap and then it was off to Canada vs Germany which was another great time. (did anybody see us on TV? Most likely at curling cause it was not busy there) After the game we met up with a guy from Calgary staying in the same apartment as us. 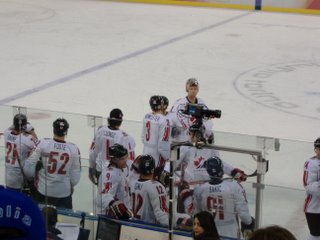 The 3 of us somehow ended up leading a crowd of close to 100 drunken Canadians to an Irish pub we had gone to the night before. It was crazy. I felt like Moses leading a bunch of drunken Jews! Had a great time and met some cool people from Switzerland, Germany, Canada, and of course, Italy. We did not get to bed till close to 600.

We ended up missing the first train to Aosta Italy and had to take a later one. It was pretty weird going from such a busy place to a very quite one. And nobody speaks engligh here. Nice little city that is very clean. Reminds me of Banff…but with beautiful Italian women.Tomorrow we are off to Mt.Blanc. We take a gondola ride up and over into France. Should be a very cool. I will post pictures the next internet stop. Internet cafes seem sparse in Italy.

Till then, Cheers…and again I am alive and having a blast.