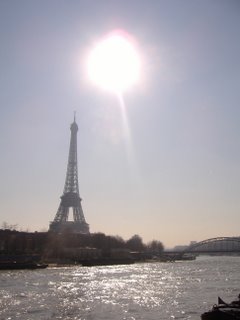 We arrived at the Paris train station on Monday afternoon. Emma, a wonderful lady my mother had met in Australia, met us at the train station and took us to stay at her place. It was very nice of her and she was a great host. Normally I am not the type of person to stay with someone I barely know but I am glad we did as we ended up getting a guided tour of the city…and a free bed.Tuesday Emma worked so Jon and I went to the Eiffel Tower then took a boat tour and saw some sites.

Later that night we were looking for a place to have a beer and food. We found a dirty kebab place and ordered. Inside there were 2 older drunk homeless guys arguing. Another customer pushed one then the owner kicked the drunks out. As Jon and I left the restaurant I got a cheap shot to the face by one of the drunks. I think he was waiting outside for the other customer and smoked me instead. It was very odd yet funny. I pushed him and he fell over a sign. people inside cheered. We walked away confused by what had taken place and then noticed that the drunk was (slowly) coming after us with a pocket knife. I wish I took a picture as it was very odd. We decided not to cause trouble and sped away. Interesting night. Not everyone can say they have been to Paris and have seen the Eiffel Tower, even fewer can say they have been to Paris and punched in the face by a homeless guy! I could be wrong… 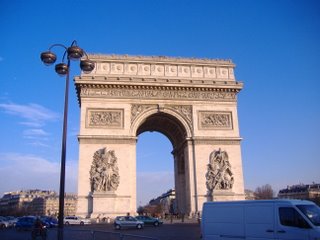 The next day Emma gave us a guided tour of the Louvre. I had no idea how big it is. Again, I am not one for art but I found the sculptures and artifacts very impressive. We saw the Mona Lisa and I guess that was cool? I more enjoyed the mummified cats and the building itself. After the Louvre we walked to the Arc de Triumph which was very neat. Had coffee and chatted with Emma about her upcoming travels to Vietnam and China then were off to the train station for an over nighter to San Sebastian, Spain for some much-needed sun.